RETRO REVIEW: Leave It To Chance # 5 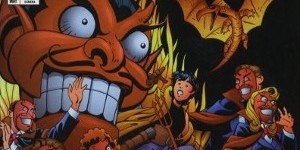 This week it’s time for a new RETRO REVIEW, therefore I’ve pulled out one of my favorite, though short lived independent comic book series, Leave It To Chance, from Homage & Image Comics.  And for the purposes of the review, I’ve selected Leave It To Chance # 5, cover dated May 1997.  This is most recent RETRO REVIEW to date, as well, if you’re keeping track.

The series only lasted thirteen issues unfortunately, but if any thing, that makes it easier and cheaper to collect than a lot of long running comic series.    The series was created by writer, James Robinson and artist, Paul Smith and stars a young female protagonist by the name of Chance Falconer.  Chance is the fourteen (14) year old daughter of paranormal investigator, Lucas Falconer.  Oh, she also has a pet dragon, named St. George.

The series was published irregularly for twelve issues, first from Homage then in conjunction with Homage and Image Comics from 1996 through 1999.  Then in 2002 a thirteenth (13) issue was published by Image Comics, then the comic was gone.  The series began with a storyline that ran through the first four issues.  These comics introduced the reader to Chance, her father and the rest of the inhabitants of the city/town of Devil’s Echo and set up her world where supernatural elements are commonplace and the existence of monsters, ghosts, demons and magicians was a matter of course. 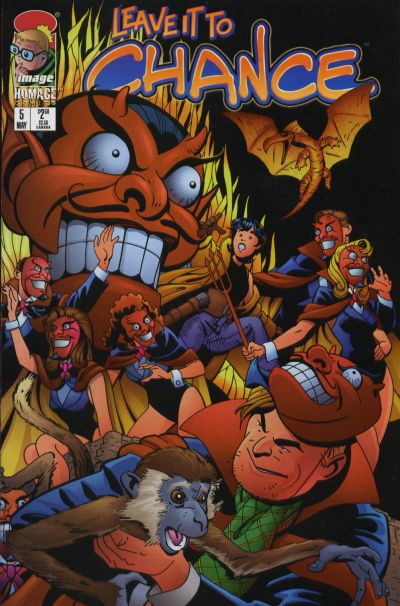 The wonderful cover is pencilled and inked by the series artist, Paul Smith.  It’s busy, but really gets the message across in regards to what happens in the comic itself.  The story is entitled; “Trick Or Threat” and it is written by James Robinson, pencilled by Paul Smith and inked by George Freeman.

Like the series this issue features adventure, mystery and the supernatural.  It begins with Chance attending the annual Devil’s Echo Halloween parade,  Her father, Lucas Falconer is the parade’s Master of Ceremonies.  He’s invited Chance to ride with him, but she has declined, as she prefers to be “on the street” with all the revelers. Smith has a great time drawing people in various great costumes.  Easily seen is a Hobbes, from the terrific comic strip, Calvin & Hobbes, there is the Bride of Frankenstein, a young boy in a Lucas Falconer mask and plenty of monsters and devils.

A nice touch, is when some people think her pet, St. George, is a paper mache prop!  As the parade continues, Chance comes across a young boy who is crying, rather than enjoying the parade.  She asks him what’s wrong and he responses with; “I lost my Stanley”.  It turns out that the young boy is named, Greg (hey, great name!) and someone in a devil’s mask has stolen his pet monkey, Stanley.

Chance decides to help Greg try to find and get back his monkey.  St. George is able to get the monkey’s scent from the monkey’s jacket that Greg was able to hold onto when the monkey was snatched.  And the chase is on!

The encounter a long time friend of her father, Jean Pierre, and he reveals that the parade route actually is not random, but follows the path of the first battle that the long line of Falconers have fought against the dark forces!  It seems the route is still “rich in magical powers”. Apparently saying the right spell over the monkey along the route with give the monkey great powers of some sort.

Well, it turns out that by saying the spell over the monkey and then sacrificing him, a great evil will be brought back to Devil’s Echo.  Chance and Greg track the monkey thief to his liar and Chance dives in with both feet from above and with the help of St. George and the monkey, Stanley the spell book is destroyed and the great evil banished before it could get a foothold on her world.

Not a bad little story, told all in a single issue.  Chance has again saved the day, without any help from her father, though she does create some enemies of her own, that foreshadows things to come in the series.

And the book ends with Chance being told that her father “wants to talk”!  What kid hasn’t cringed at the sound of those words?  I really love this series and give it my highest recommendation.  I know that you’ll love it too, if you give it a chance (yes, pun intended).

That’s all folks, but please come back next week for a new Fabulous Find.  Stay safe and enjoy what’s left of the summer!  Be seeing you …