This 59 cent comic sized publication is written by Mary A. Mintzer and it is illustrated by Alden McWilliams.  I’ve never heard of either of these two people, and as far as I know, they have no ties to Marvel Comics.  McWilliams art is pretty compatible with the Spider-Man comic book series.  Take a look at his cover for this one shot publication: 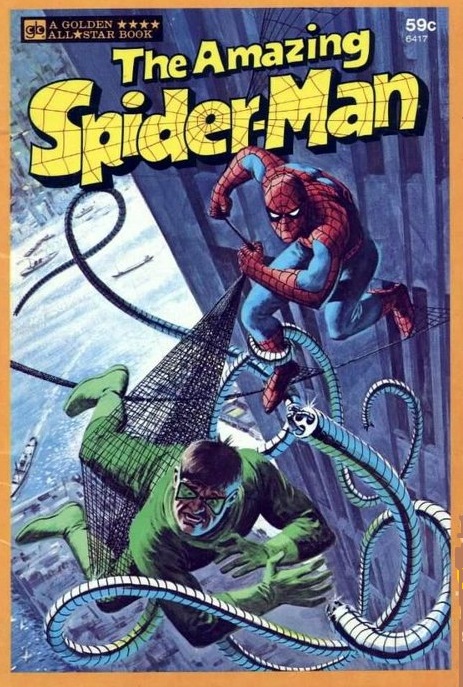 The book contains three separate stories, all written by Mintzer.  Their titles are; “The Captive Crowd”, “Aunt May’s Crusade” and “The Taking Of Manhattan Isle!”  As I said the art is pretty nice but the stories, well, that’s another thing entirely!  Mintzer takes liberties with the Spider-Man cast, as she sees fit.  For example, she has a raven-haired Mary Jane Watson working at the Daily Bugle as a reporter!  Peter Parker is still a photographer, but appears to be employed full time.

Peter and Mary Jane are assigned to cover a story at Yankee Bean Stadium(???) where there is going to be a rock and roll concert and a speaking engagement by a man ministering to the youths of America.  The name of that man … Egg Foo Yung.  Really?  Egg Foo Yung?  And his two able bodied assistants; Egg Drop Stoop and Won Ton Dupe!  No I am not kidding you!  Plus he’s got a body guard named … 3X Moo Shu Pak!  I mean, that’s reason enough to stop reading right there!

Needless to say, this is an out of continuity story and obviously has nothing to do with the Peter Parker/Spider-Man found in the comics!  But back to the story. the Reverend Egg Foo Yung has arranged a free concert and has corrupted the youth of America to be his army!  He’s arranged to have the concert held in a domed stadium, where the sons and daughters of the most powerful industrialists will attend.  His plan is to fill the stadium with poison gas unless the parents give in to his demand to hand over 51%, or a controlling interest, in their companies!

Of course, Spider-Man comes out on top, but not through heroics, as he’s actually too late to save the day, but because of an electrical fault that frys Egg Foo Yung!

The other too stories are equally as bad.  The second one features Aunt May forming a protest group to protest charges for women’s public toilets.  And that group’s name? … F.L.U.S.H. which stands for … For Leaving Unlocked Sanitary Habitats!  But her group receives so much money they become a target for S.C.U.M., Society For Cutting Up Men!  This group has killed an artist by the name of Handy Battleground, by shooting him 75 times!  And of course, Spider-Man is blamed!  Wow, when has Spider-Man ever used a gun?  And to shot someone 75 times!  How many times would that gun have to be reloaded?  Ultimately Spider-Man is determined to be innocent and is pardoned, so everything ends well.

The third story at least features a villain we’re all familiar with, Doctor Octopus!  In this story the city of New York has run out of money!  Well, in this day an age we know this can actually happen, so Mintzer may have had something on the ball, she just ought not to be writing Spider-Man stories!  So what does the city do?  Why they borrow the money they need to keep operating from none other than … yep, you guessed it, Doctor Octopus!

Somehow this enables Doc Ock to legally own Manhattan!  No really!  That’s what Mintzer wants her reader to believe anyway!  I know that when we read comic books we are to suspend our believe in the real world and just immerse ourselves in this fictional world, but Mintzer just goes to far out there for me to follow her blindly!  Anyway, that’s where Spider-Man comes into the picture.  And he, of course, beats up Doc Ock, but then what does he do?  He threatens to kill him unless he signs the city back over.

Well this just has gone to far!  Spider-Man threatening to murder someone?  Sure, Ock is a bad guy, but Spider-Man, a hero, doesn’t go around threatening to kill people!  Really?  And this was marketed to children via Golden Books?  Didn’t Western Publishing read this before they published it?  Didn’t Marvel Comics read it before giving their okay for using Spider-Man?

I’m flabbergasted by it all!  Needless to say, this book isn’t for children, or it shouldn’t be!  And it sure isn’t for the comic book fan either!  I don’t remember when I picked it up, and truthfully, before pulling it out for this Fabulous Find, I don’t think I ever read the thing.  But if you want a truly unusual Spider-Man collectible, you’ll want to pick this up.  You can readily find them on eBay at reasonable prices.

Thats all for this Fabulous Find but please check back next week for a new RETRO REVIEW.  Be seeing you …