I think it’s time for another look at one of my Big Little Books (BLB)from Whitman Publishing Company, Inc. of Racine, Wisconsin. So for this week’s Fabulous Find, I’ve reached for The Fantastic Four in The House of Horrors.  It was published in 1968 in conjunction with Marvel Comics.  Here’s the cover: 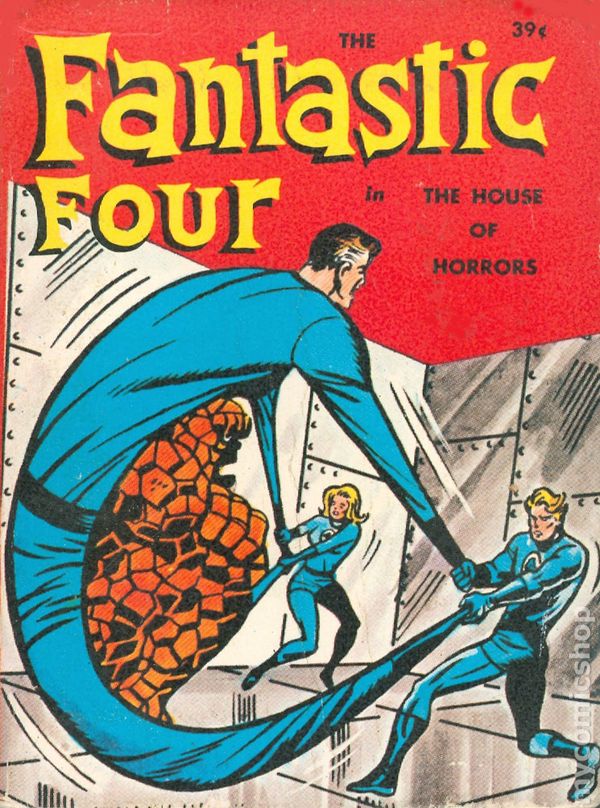 The book has thick cardboard covers, and the interior illustrations are in color.  If you’re not already familiar with Big Little Books, alternate pages between artwork and written words, so that when you are holding the book open, one page shows artwork and the other has the writing on it.

Whitman chose author William Johnston to write the story and Marvel assigned the art duties to the relative newcomer to the Marvel Bullpen, Herb Trimpe.  I was familiar with Johnston, as he had written a number of television tie-in books, such as the Get Smart series. And clearly Trimpe was asked to “ape” the style of Jack Kirby.  I believe I read somewhere that Kirby was too busy to take on this assignment at the time, and that was why Marvel had Trimpe tackle it, but obviously in the Kirby style.  And in fact, Trimpe does an excellent job of mimicking Kirby’s art style in his illustrations.  Here’s an example of his work: 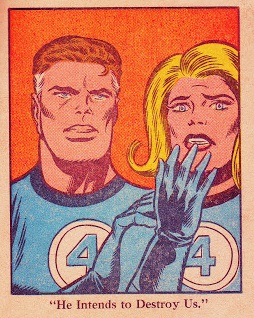 As you can see from the example above, if you didn’t know better, you just might think that Jack Kirby drew this illustration, or if it was ten five or six years later, Rich Buckler.  But is you look closely at each illustration, you just might find a couple of Jack Kirby drawings that have been lifted directly from his Fantastic Four comics.  Here’s an example where Kirby’s work was copied and used. 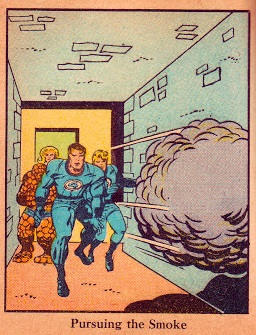 The figures of Reed, Johnny and Ben were lifted from Fantastic Four # 77, page three and Sue’s head was added over the Thing’s shoulder.  This comic was cover dated, August 1968, so the art would have likely been in house at the time Trimpe was working on this Big Little Book assignment.  Why they used Jack’s art on this page might never be known, but perhaps Marvel didn’t like Trimpe’s illustration for this page or maybe he was running late so the production staff was trying to help complete the assignment on time.

The book itself opens with a floating tombstone that appears in Reed’s lab within the Baxter Building.  Writing appears upon the tombstone which reads; “A challenge to the death!  Doom awaits the Fantastic Four at the House of Horrors!”  The appears the final line …”Meet your Master – Dr. Weird”.

Reed knows that the House of Horrors is an old mansion at the edge of town that has been abandoned for years and is considered to be haunted.  He also knows that Dr. Weird is part magician and part scientist, anf through the use of illusion, he can change his shape.  How Reeds knows this is not explained, but hey, go with it.

The Fantastic Four leap into their Fantasticar and fly to the old mansion located on a hill. They enter the house and decide to split up to find Dr. Weird.  As they search they spring a series of traps meant to disable or even kill them.  The Human Torch encounters a fire breathing dragon in Dr. Weird’s den and ends up having his flame doused by a wall of water.

Mr. Fantastic encounters a parlor filled with pythons and ends up tied in knots.  The Thing, exploring the basement, finds it full of boulders and as he smashes his way through them, he is overcome by gas.  And The Invisible Girl comes across a very large cat in the kitchen!  Hmm, why is it that the writer chose to have Sue explore the kitchen, I wonder?  Well, remember it was 1968!

Sue uses her force fields to keep the tiger away, only to see the tiger become a costumed, Dr. Weird.  She angers him by becoming invisible, so he turns himself in a ball of smoke and floats away.  Sue realizes that the others might also be in danger, so she rushes to their aide.  She finds Ben first, then Johnny, and finally Reed.  Together they ascend to the second floor of the House of Horrors, where they find Dr. Weird.  They turn down his proposition to join him and when they  attack his again turns into a ball of smoke and floats away from them.

They follow the smoke and are trapped in a sealed room.  They are unable to break through the doors or even the walls to escape, but Mr. Fantastic eventually slingshots the Thing upwards, where he breaks through the ceiling.  They all escape through the hole in the ceiling and encounter Dr. Weird,  Again they battle and again he used his trick of turning into a ball of smoke to escape, this time down to the garage.

Again the FF follow and find a garage of glass, well actually, it’s filled with mirrors.  Again our heroes battle Dr. Weird, but are unable to defeat him.  But he manages to defeat himself, as he fires off a spell only to have it ricochet off one of the many mirrors and strikes himself. And wham, bam, that’s all she wrote for this adventure.

Maybe not the best Fantastic Four story ever written, but Johnston did a pretty good job capturing the Fantastic Four’s personalities.  I would guess he read a number of issue of the comic before writing this book.  And as I said earlier, Trimpe does an excellent job doing a Jack Kirby imitation.  All in all, a pretty neat collectible.  And the good news is that you can pick it up pretty cheap via eBay.  Not for the 39 cents it sold for in 1968, but generally for under ten dollars.

Please come back next week for a new RETRO REVIEW (It will feature a DC Comics book) and again in two weeks for another Fabulous Find.  Take care, stay warm and I’ll be seeing you …