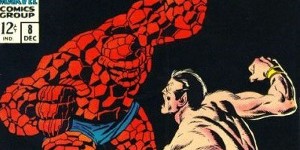 This week it’s back to Marvel Comics for a new RETRO REVIEW.  And I have selected Sub-Mariner # 8 for this one.  The comic is cover dated December 1968, which means it was on the stands likely in September of 1968, just as summer was ending and all of us were going back to school.  It features a great cover drawn (pencils) by “Big” John Buscema and Dan Adkins (inks), showing Sub-Mariner battling the Thing, from the Fantastic Four, against a stark black background.  Take a look: 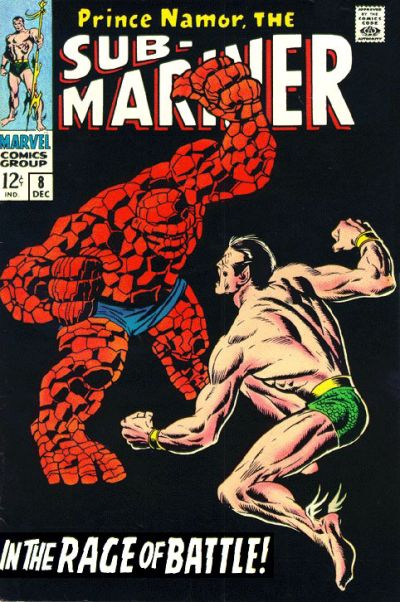 Stark?  Yes, but very effective, at least in my opinion.  The two figures practically leap off the page and into your lap!  And with the black background this comic really stood out on the comic racks back in 1968.  How could you not want to pick this up?

The story is entitled; “In The Rage Of Battle!” and it is written by “Rascally” Roy Thomas, with the art provided by the same team that gave us the great cover; John Buscema and Dan Adkins.   The splash page shows a copy of the Daily Bugle, dated September 7, 1968, in a wastepaper basket, with a front page picture of Sub-Mariner punching the Thing, with a pair of hands writing in a journal, seated behind a desk.

The story then is told from the perspective of the journal writer, who states that she must set down the events, while they are still fresh in her mind.  The writer starts off the story where the previous issue ended on top of a building in mid-town Manhattan, with Sub-Mariner coming to the aid of Lady Dorma, who collapses saying she can’t breathe.  She must be given a pill which enables her to breathe out of water.

To do so they must carry her to the other person’s dwelling place.  Yes, a woman, by the name of Diane Arliss, was with Sub-Mariner and Lady Dorma. They must battle through a squad of Policemen to escape the building, then as Sub-Mariner flies off with Lady Dorma, the woman hails a cab, asking the hack to drive through an alley, where Sub-Mariner lands with Lady Dorma and joins the woman and the taxi driver.

Once they get Dorma up to the woman’s apartment, she is given the necessary pill, enabling her to breathe once again.  While waiting for Lady Dorma to recover, Sub-Mariner tells Diane a tale from his past, just prior to World War II.  In his tale, he is once again showing his wrath towards the surface dwellers when he meets another woman, by the name of Betty Dean.

Betty Dean is an out of uniform policewoman and she confronts Subby, asking him to leave, so that innocent people are not hurt.  Sub-Mariner agrees because of Betty’s courage.  But as fate would have it, as Subby leaves he is attacked by android Torch.  He wins that battle quickly (hey, he’s the one telling the story).  He goes on to say that shortly Betty Dean showed him the true foe, the Nazis!

The story recaps a battle against the Nazis and then continues with Subby’s farewell with Betty Dean after the war.  Sub-Mariner explains that he did love Betty Dean but that he could never marry her, as the Prince of the Blood must marry an Atlantean!  It’s at this moment that Sub-Mariner and Diane hear a radio broadcast regarding the previous issues villain, Paul Destine (Destiny) and his mysterious metal helmet.

Namor is afraid that the helmet will be used yet again and races off to prevent this from happening again.  There then is a one panel cameo appearance by Goliath and the Vision from the Avengers turning down the job of guarding the helmet when it is delivered to Washington, DC.  Without the Avengers help, the authorities turn to the Fantastic Four, though only Benjamin Grimm, aka the Thing, shows up, and he agrees to deliver the helmet.

As the Thing flies off with the helmet of power, Sub-Mariner intercepts him and they battle though the city fighting for possession pf the helmet.  The reader gets to enjoy an eight (8) page battle and as Sub-Mariner gains the upper hand and is about to crush the Thing, he is stopped by an older lady, who identifies herself as, Mrs. Prentiss, who asks Subby to end his “savage wanton destruction”.

Sub-Mariner knows her and says … “you!” and his angers ebbs away.  He asks her to stay, so that they can talk, but she said she has done what she needed to do and that they have nothing to say to each other.  She slowly walks away and Sub-Mariner flies off with the helmet.

The story ends with the revelation that the older woman, was Betty Dean, now Betty Dean Prentiss, and it is her who was writing in the journal and telling the story to the reader.  Apparently, Diane Arliss found Mrs. Betty Dean Prentiss, knowing that she was the only one who could get through to the Sub-Mariner and stop his battle with the Thing.

That’s it for this column, but be sure to return again next week for an all new Fabulous Find, and of course again in two weeks for another RETRO REVIEW.  Be seeing you …