And a good day to all my fine readers!  I hope everyone is doing well and thank you for coming back for another Fabulous Find.  This week I’m looking at the fanzine; Infinity # 1.  It was published in the summer of 1970 by Gary Berman with the help of Adam Malin and Richard Anders.  The fanzine lasted six issues which wasn’t bad and featured a lot of great artwork during it’s run.  The fanzine was so popular that issue number three was split into two volumes.  Fortunately, I was able to secure my copy of issue number one recently on eBay for a reasonable amount.  So I now own the first five issue, and only recently learned of the sixth issue.  So I’ll be on the search for a copy of that issue, as well.

Here’s the front cover, as illustrated by Bernie Wrightson: 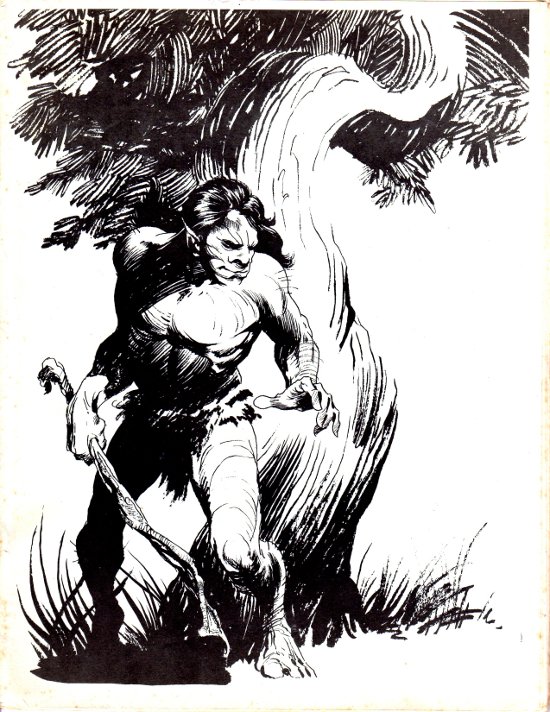 The inside of the front cover was a dedication to a large number of comic book writers and artists who’s work the editors appreciated.  Next up was a Table of Contents and a list of illustrations contained within.  Following that was a message form the editor, spanning two pages.

Then a nice Dave Cockrum drawing of Spider-Man, Daredevil and Captain America.  Not up to his professional work, but quite good for an amatuer artist.  Needless to say, he would get better and better.  Her’s that illustration: 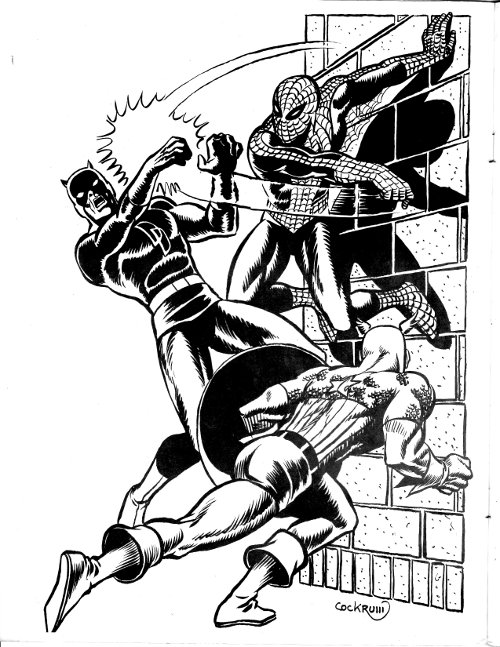 This was followed by a two and a half page interview with publisher Bill Gaines, who published the EC Comics line of the fifties.  Adam Malin handles the interviewing chores.

Next up is a Comics Quotient quiz.  I spans two pages and covers both Marvel and DC Comics, as well as, other publishers and even fanzines.  I found it challenging.  The next page provided the answers and rated the quiz taker from “Go back to Yancy Street” to “Wow!!! Wow!!! Wow!!!.

Following the quiz is a short one page article on the recent return to horror comics by both DC and Marvel Comics.  The writer is not credited, but is likely, Gary Berman.  Then follows three pages rating other fanzine currently available in 1970, including the Rockets Blast Comic Collector (RBCC), Witzend, Anomaly Two, Graphic Showcase, Squa Tront and Gosh Wow!.  My one little complaint is that the editors use the term fanazine rather than the accepted term, fanzine.  Don’t know why this bugged me so much, but it did, big time!

Next up is a one page interview with … Galactus.  Yep, that’s right, the big guy himself, from Marvel Comics’ fame. Needless to say, it’s tongue in cheek!  Then there is a one page article on “The World of Comics, Fanazines, Fandom and Other Related Items”.  Rather a broad title for only a page article, eh?

Next up is a page comic history of Tarzan by Jonathan Victor, which included this Russ Manning sketch: 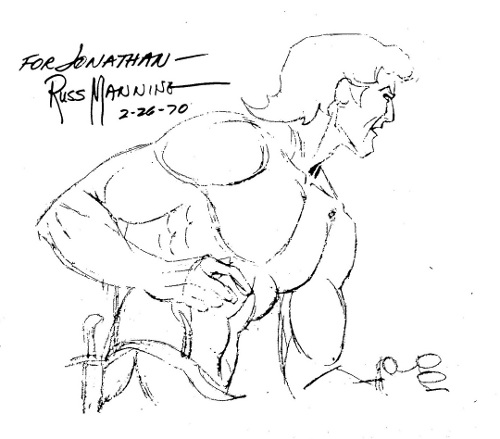 Following that is another one page article entitled; “The Comic Speculator”, where in the editors use their readers to invest in multiple copies of certain comics, like Silver Surfer # 1 from Marvel currently which they think will have as much value as Fantastic Four # 1 or X-Men # 1 in the future.

Which brings us to the mid point of the fanzine, where the editors share a recent Jack Kirby sketch of Captain America and the Red Skull from the year before (1969).  I guess I’ll share it with you, as well: 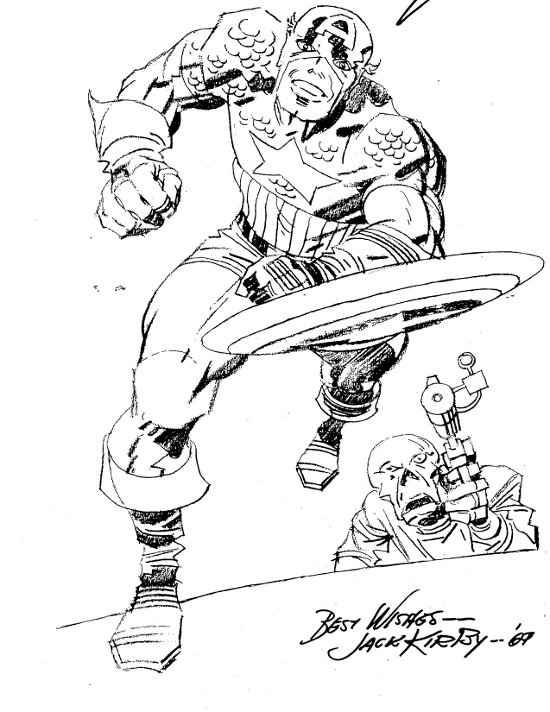 The second half of the fanzine leads off with an interview with publisher, Jim Warren.  This interview is conducted by co-editor, Richard Anders.  Following that is another illustration by Dave Cockrum of three of Marvel’s Avengers.  Take a look: 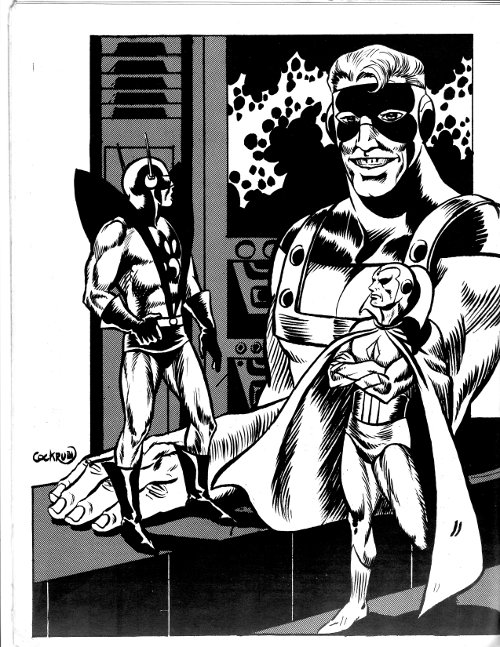 Next the editors print an ad for Warren Publications‘s magazines, Creepy, Eerie and Vampirella.  This is then followed by a seven page reprint of a Reed Crandall from 1953 Vault of Horror comic.  The story is entitled; “The High Cost of Dying!”.  Following this is a two page fiction story entitled; “The Great Revolt”.  Again the writer is uncredited.

Following that, there is a two page “Conan portfolio” by Bernie Wrightson.  Though I don’t see Conan anywhere in the two drawings, so let’s just call them barbarian illustrations, why don’t we.  Unless Wrightson feels that Conan had pointed elf ears.

The fanzine wraps up with a one page editorial by Adam Malin and a one page focus on artist Hal Foster.  Foster also supplied the back cover artwork.  It’s an illustration of his character; Prince Valiant.  Here is is: 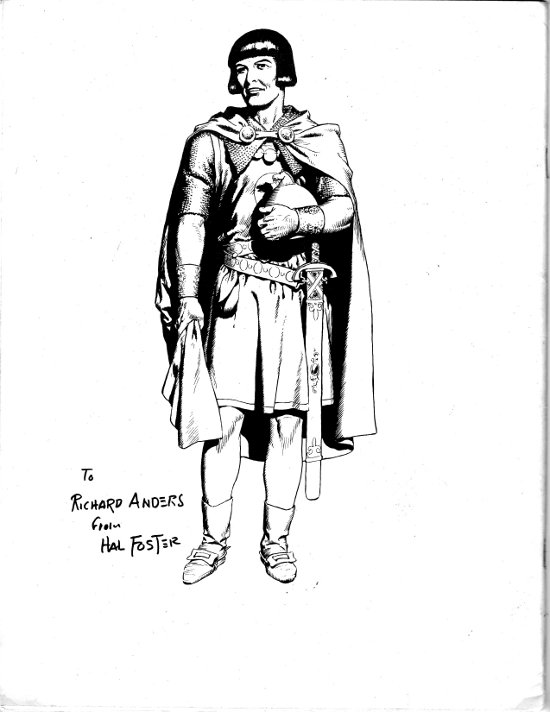 That wraps up Infinity # 1.  A little rough around the edges, but it features some pretty nice artwork from pros and fans alike.  The fanzine is well worth collecting and it only gets better and better as it continues.  I would definitely put this one in the artist zine category.  Buy it for the art, not the writing.

Please let me know if you’d like me to showcase later issue of Infinity and I’ll happily oblige.  And of course, please come back next week for a new RETRO REVIEW and count on another new Fabulous Find in two weeks.  Be seeing you …