It’s time for a non Marvel and non DC Comics RETRO REVIEW this week, so I’ve dug through my boxes and have pulled out this Gold Key / Western gem of a comic, Doc Savage # 1, from November 1966.  It’s features a great James Bama cover of Doc battling a snake!  Take a look: 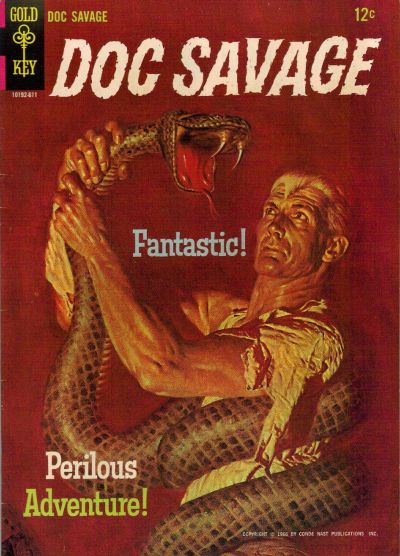 If you collected the Bantam Doc Savage paperbacks that were published during the sixties and seventies, which reprinted the original Doc Savage stories from the pulps, you might think the comic book cover looks a little familiar.  And it should, it’s a “blown up” portion to the Bama cover for second book in the series, “The Thousand-Headed Man”.  Here it is for comparison: 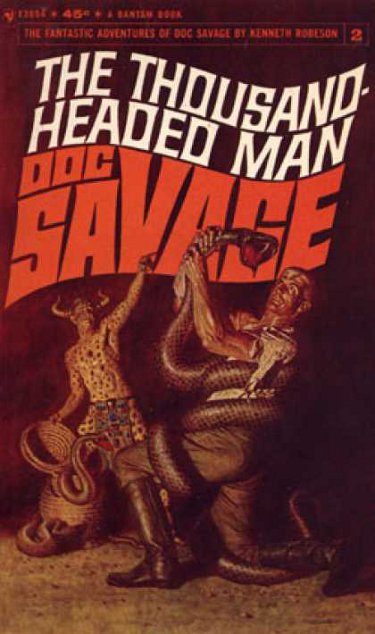 Personally, I think the art for the comic book cover better shows off Bama’s skills than the book cover, as you can see it much better in the bigger size, even if it is only a cropped image.  What do you think?  Agree?  Disagree?  The back cover of the comic book reprints the same art without the title of the comic and all the other words, etc.  But they spoiled it, at least in my opinion, by adding the words; Doc Savage Pin Up.  Without those words it could be removed and framed and displayed as true art!  Oh well, a missed opportunity.

Anyway, the comic book story itself is written by Leo Dorfman, and the pencil and ink art is provided by Jack Sparling.  The story is an adaptation of the Lester Dent (writing under the house name, Kenneth Robeson) pulp story that was reprinted as the second book of the sixties Bantam paperback series.  And it’s even entitled; “The Thousand-Headed Man”, so there can be no mistake where the story comes from.

I did learn that this comic was planned to be released in conjunction with a Doc Savage movie starring Chuck Connors, but the movie never came about.  And the world would have to wait for Doc’s cinematic debut in the 1975, Doc Savage: The Man of Bronze movie, starring Ron Ely.

The story begin with a mysterious man running away from someone who is trying to kill him.  He shows up at the London Croydon airport, where Doc Savage and his five aides are arriving.  The man tosses Savage a package and shouts he’ll contact him later.  He then disappears into the crowd.

Later, at his hotel, Doc unwraps the package and discovers a plastic key.  The scene then switches back to the man, who confronts Sen Gat, the man who sent the killers on his trail.  Sen Gat is the owner of another of the plastic keys.  The reader learns that there are actually three keys.  Sen Gat and his flunkies overcome the man and Sen Gat sends his men to get the other key back from Doc Savage.

The men are scared away from Doc’s hotel by Monk and his pig Habeas Corpus.  Doc Savage follows them back to Sen Gat and using hypnotism he discovers that there are three keys and that they are the key to the Thousand -Headed Man and his vast treasure.  Doc discovers that another key is in the hands of Lucille Copeland.

He goes to visit her, but she attacks him with a spear and gets away.  Though Doc investigates and finds out that Lucille is the daughter of the explorer Dr. Copeland and that a year ago Dr. Copeland and is family were on the way to Cambodia in search of a lost city.

Doc returns to his hotel to find Maples, the man who tossed Doc the package to start the adventure, and with him is Lucille Copeland.  Maples has managed to get the second key from Sen Gat and Lucille has brought her key, and with the key that was tossed to Doc, they now have all three keys.  Lucille tells Doc what happened in Cambodia and that Maples was her father’s right hand man.  During the trip the previous year, Dr. Copeland and his wife disappeared, and Lucille and Maples had to return to England to try to raise funds for another trip to Cambodia to try to find her parents.

Doc, his men, Lucille and Maples fly to Cambodia to attempt to find her parents and the lost city.  Sen Gat and his men try to stop them along the way, but Doc and his men overcome each attack, until finally they arrive in the jungles of Cambodia.  Monk makes a chemical discovery and then all of Doc’s men, as well as, Lucille and Maples, disappear.

Sen Gat tries to escape with the treasure, but doesn’t succeed when he meets his fate at the fangs of many cobras. Doc, his men, as well as, Dr. Copeland and his family are safe because of Monk’s discovery.  I’ll not tell that, in case you want to pick up a copy of this comic some day.  All in all a pretty good adaptation of a pretty good yarn.  The art is serviceable but nothing to “write home about”, but doesn’t take away from the work.

The inside back cover is even a Doc’s Team pin-up, which I’ll leave you with: 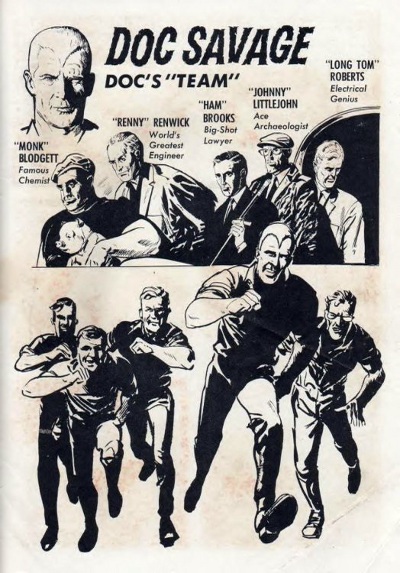 As you can see from the pin up, Doc’s team is made up of “Monk” Blodgett, a genius chemist, “Renny” Renwick, engineer, “Ham” Brooks, big-shot lawyer, “Johnny” Littlejohn, Archaeologist and “Long Tom” Roberts, electrical genius.

Please come back next week for a new Fabulous Find and of course, be back in two weeks for the next RETRO REVIEW.  Thanks for stopping by!