This week I’m going back, back, back, way back … to 1958, for the first issue of Frantic! for my Fabulous Find.  It was published by Pierce Publishing Corporation out of New York City.  And it appears to be inspired by none other than MAD Magazine.  Mad started up in 1952 and Frantic appeared on the newsstands in the summer of 1958, as it’s cover dated October 1958, or six years after MAD first appeared.

Here is the cover for this fine, fine publication: 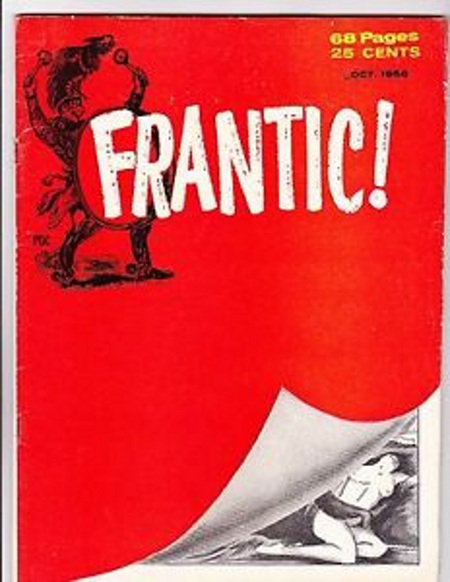 I love that above the masthead on the title page, it reads … Reads Good – Like a magazine should!  Sounds like a cigarette commercial, doesn’t it?  They even offer up letters from readers before an issue has even been printed.  The one thing I couldn’t find was any listing of writers or artists for this magazine.  You’d think somewhere there would be an accounting, but I didn’t find anything, anywhere.  All of the names that appear on the title page are fictitious!

The first feature is entitled; Have Carpet Will Travel and it’s the first adult eastern, since there have been so many adult westerns , they thought they’d offer up something different.  It’s five pages and enjoys pretty nice artwork.

Speaking to my love of music, next up is a single page for Hi – Fidelity Buffs.  Then there are a number of fake ads for such products as, Lucrezia Borgia instant poison mix, Robert Howl men’s armour stores, Chris Columbus’ Mystery Cruise, etc.  Next up is a four page illustrated How to Beat the Recession piece.

A couple of text pieces follow, for example; The Old Man and the She by Ernest Heminghay and Drop Dead, My Lovely by Mickey Spillame.  Then another four pages illustrated on how to train pets, including lions alligators and women!

Pages 36 and 37 feature a do it yourself Pin – Up.  Following that is the important illustrated story; The Discovery of the Bagel!  Imagine the true facts behind that story!  Then a page on withering replies for owners of midget cars, which includes … “Awww – shut up” and “drop dead”.  There is a look at famous american battlefields, starting with Gettysbug Alley, scene of the Great Rumble of ’58.

Next up is New Pills for Your Ills, for hypochondriacs of the 50’s.  Then a couple of puzzle pages brings us near the end.  But before we reach the end there is Romance in Space a short two pager.  Then two pages from Mildew Slut, who gives the confidential lowdown on the men in her life!  And finally Frantic presents the clean, clean H bomb in a cut away diagram.  And the rear cover is a ad for Schlutz, the beer that made water famous!

Sorry but I can’t show you more from this first issue, but I’m away from my scanner and I could find no interior pages on the web.  So you’ll have to use your imagination, but definitely think MAD but just a little bit cruder.

That’s it for this week’s Fabulous Find, but come back next week for a new RETRO REVIEW.  Til then, stay frosty!