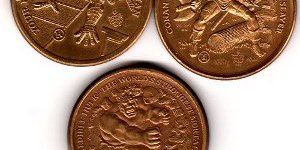 Hey gang, sorry to have missed posting last week, but it couldn’t be helped, as I found myself with an unexpected hospital stay.  Everything is cool now, but could have been very, very bad.  But with that said, let’s get right into this week’s Fabulous Find.  This week I want to look at the 1970’s medallion/coins from Marvel Comics.  These bronze, or so they were advertised as such, medallion/coins, were sold through the Marvel house ads during the 1970s.  Sorry, I’ve not been able to pinpoint the exact dates for some reason.

Three coins were offered.  The first, of course, featured Spider-Man, the second, the Hulk, and the third, some what surprisingly, Conan the Barbarian.  But first let’s take a look at what the comic buying public would have seen in their Marvel comic of that time.  I’ve found a couple of different ads in the comics, so I’ll show you them all, just because I can.  The first, I believe: 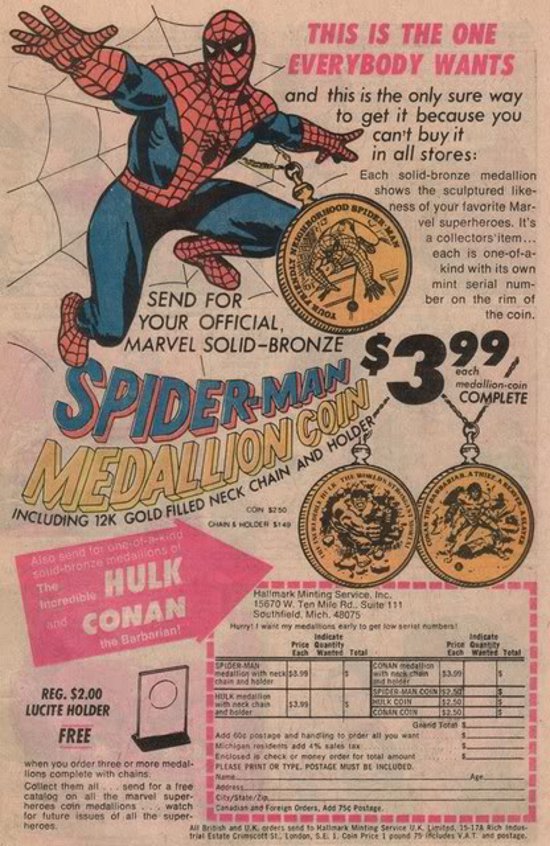 I think this next ad followed the first one a year or so later: 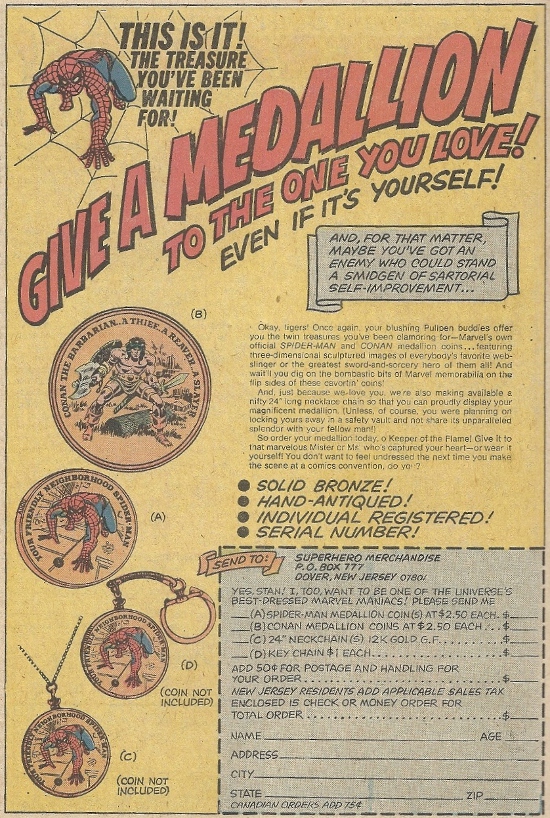 It’s possible I’ve got them in reverse order, so let me know, if you know otherwise.  There was even a later, or third ad I’ve found, so you get to see it too: 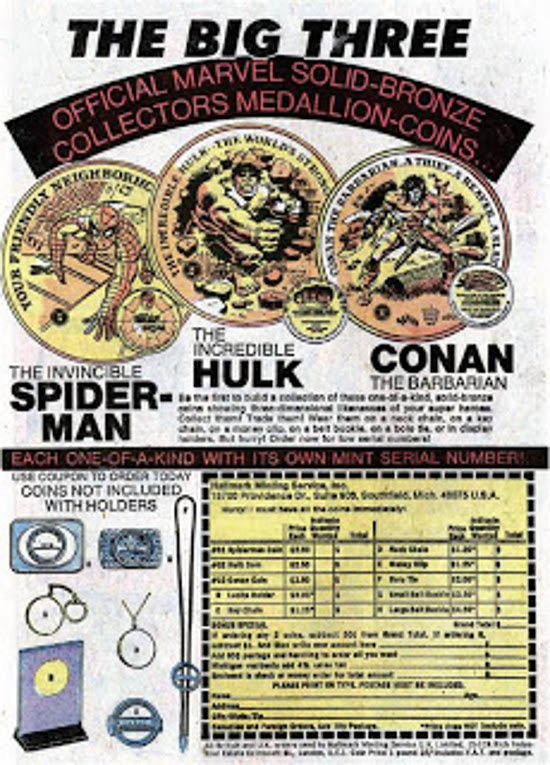 Now that you’ve seen what I saw when I was buying my Marvel comics back in the seventies, now let’s take a look at the medallion/coins themselves!  First up is the Spider-Man medallion, which I actually own and proudly display with my Mego Spider-Man figure from the same time period. 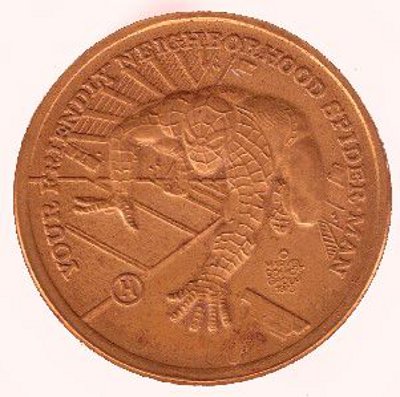 It says; “Your Friendly Neighborhood Spider-Man” on the front and on the reverse it includes the famous quote; “With Great Power Comes Great Responsibility”.  Take a look: 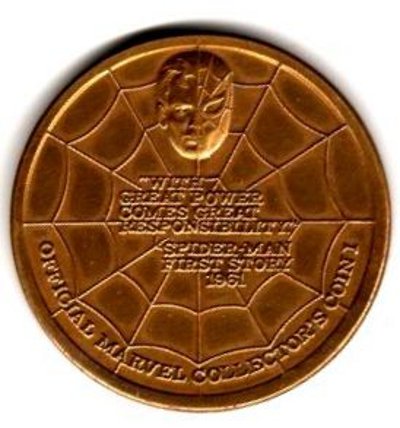 Next up is the Hulk medallion:  The front reads; “The Incredible Hulk – The World’s Strongest Mortal”: 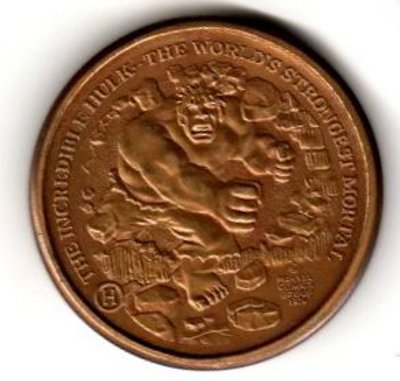 And the reverse has this quote; “Within Each Of Us Oft Times There Dwells A Mighty Raging Fury”.  Now that’s a pretty cool quote and unlike the Spider-Man quote, I don’t think I’ve ever read that in a Marvel comic book.  Take a gander: 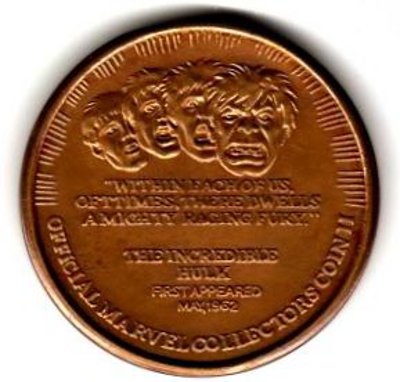 Okay, there’s the first two medallion coins, now it’s time for the third one.  This one, as I said earlier, features Conan the Barbarian.  The front reads; Conan The Barbarian, A Thief, A Reaver, A Slayer”.  Here’s the front of the medallion/coin: 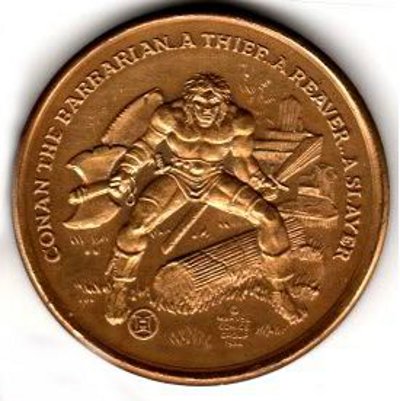 And now for the reverse side.  The back features the following quote; “Barbarism Is The Natural State Of Mankind And Barbarism Must Ultimately Triumph”.  Here it is for your viewing pleasure: 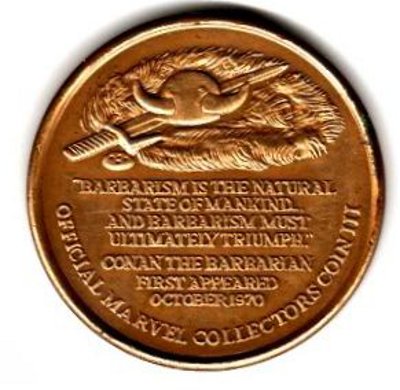 I think these are pretty neat collectibles and wish I bought the other two back in the day.  I have seen them occasionally on eBay, but I’ve not found them at a price I’m willing to pay.  But maybe someday.  Half the fun is the thrill of the chase.  I’m sure you agree with me if you’re reading this post.

That’s it for this week’s Fabulous Find, and please be sure to come back next week for a new RETRO REVIEW, God wiling and the creek don’t rise!  Till then, stay well and I’ll be seeing you …