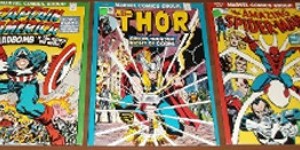 Welcome back my friends to the fun that never ends (with apologies to Emerson, Lake & Palmer for twisting their song lyric).  It’s time once again for a new Fabulous Find and this week I’ve dug in a deep, dark corner of my vast collectibles vault for something a little different.  And what did I come up with, you ask?  Well, from the summer of 1976, I bring back the Marvel Comics Mead folders.  The folders are marked copyright 1975, so I guess they might have come out in August of 1975, but my guess it was actually 1976.

That summer, right before it was time to start school in September, Marvel Comics and Mead Products came out with a line of Marvel school supplies.  There were these folders, there were notebooks, loose leaf paper and even binders.  I was already out of high school, so I didn’t pick up the whole line, but I did snag a set of these sweet portfolio/folders.  I may have picked up one or two of the packages of loose leaf paper, as well, as I have a fuzzy memory of those, as well.  But I apparently didn’t save the iron ons that came with the paper, or if I did, I’ve lost them in them moves I’ve made since way back then.

I guess I ought to jump right in and show you the folders.  So without further ado, here are the fronts of the six portfolios/folders: 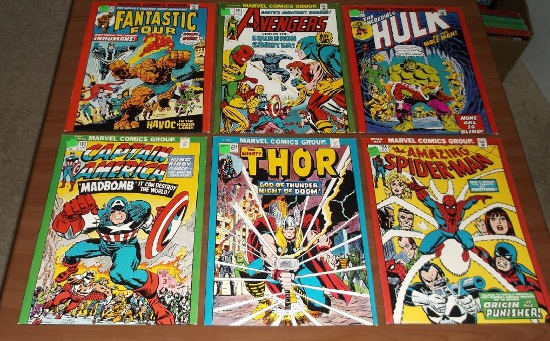 One thing to note on the Spider-Man folder they changed the color of the spider shadow behind the leaping Spider-Man.  It is white on the folder, but on the comic book it is black!  I wonder why they chose to do that?

So are you wondering what the back of these awesome folders look like?  Maybe blank?  Maybe not?  Well, if you guessed not, then you are correct!  Thank a look at the reverse sides of the six folders: 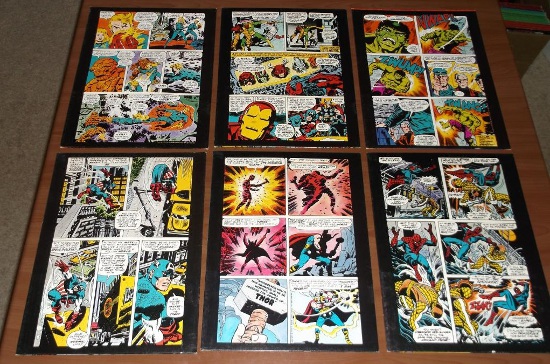 I ought to mention that the artwork reprinted on the backs of the folders did not come from the comic issue that is featured on the front of the folder.  As you can see, if you squint carefully, the artwork on the back of the Thor folder features his origin.  And the Avengers back features the bad guys, the Zodiac, rather than the Squadron Sinister that is shown on the front of the folder. But why quibble over such cool collectibles as these?  I sure won’t?

As you know with folders, once you open them up you’ve got a couple of flaps that you can tuck your papers behind to keep them safe, unless you turn the folder upside down, in which case your papers fall right out!  I didn’t take the time to scan in each of the folder insides, sorry.  There was no way to get them all in one shot, so you’ll have to settle for just the inside of the Spider-Man folder.  Hopefully you’ll accept my limitations.  Here it is: 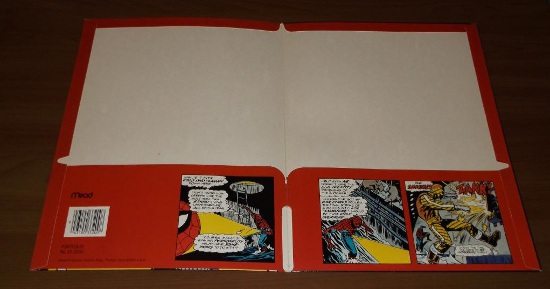 So there you go, six folders from my collection that are now almost forty years old.  So did, I ever use them?  Nope, I bought them and put them safely on a shelf, and there they stayed until bringing them out to see the light of day here in this Fabulous Find.

So do I have any information or pictures of the others Marvel Mead products?  Glad you asked.  With the help of internet searches, I was able to snag these other pictures for you viewing pleasure.  Take a look at the ad that ran for the products: 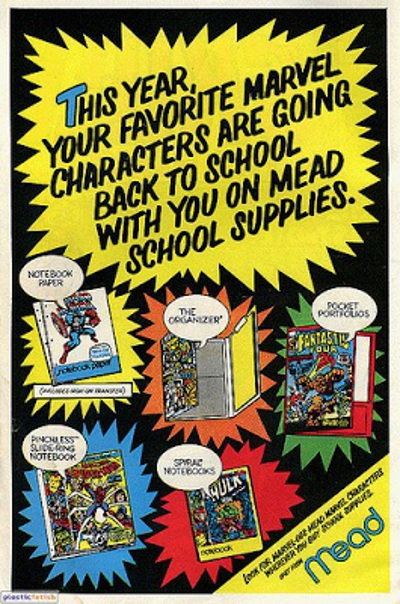 And how about another ad for the binders and loose leaf notebook paper?  Why sure: 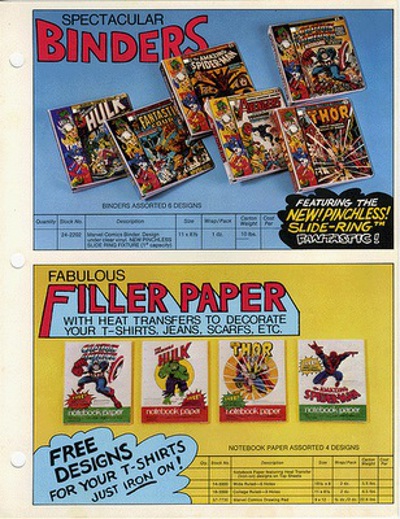 As I said above, I have memories of buying the loose leaf paper and know I had at least the Captain America iron on transfer back in the day, but truthfully, I do not remember ever seeing the binders for sale, or I’m sure I would have bought at least one of them!

And finally, here are four packages of loose leaf paper showing the iron on transfers that were included with purchase of the paper: 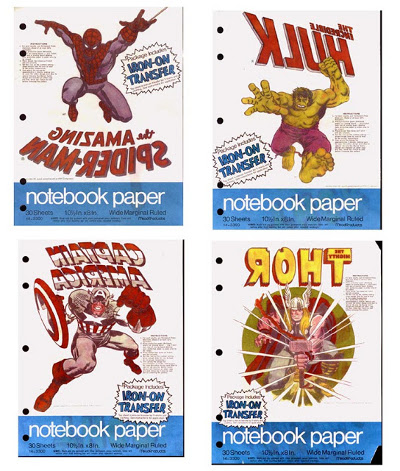 Needless to say, the words and titles are backwards, so that when you ironed on the images they would be correct on the t-shirts.  I know you’re smart enough to realise that, but I’m Captain Obvious sometimes and felt the need to explain that.  So please forgive me!

That’s all for this week, but be sure to tune in again next Friday, for a new RETRO REVIEW.  I’ll be looking at a Marvel Comic book, so for all you Marvel fans, be sure to return.  Til then …be seeing you.