1 out of 5 – Would Recommend: Return of the Killer Tomatoes 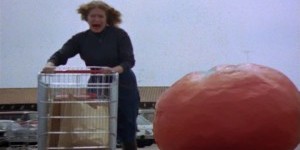 Welcome back to 1 out of 5 – Would Recommend, where sometimes we watch a movie that’s funny on purpose. That’s the case this week as we dig in to 1988’s Return of the Killer Tomatoes! 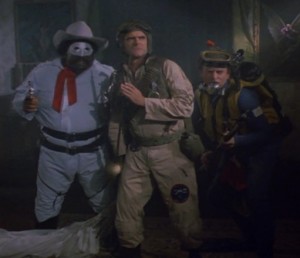 The crack team of heroes who saved America during the Tomato War.

Ten years after the Great Tomato War nearly destroyed the United States, life has returned to peaceful normalcy. Pizza delivery boy Chad Finletter, whose uncle/boss was the hero of the Tomato War, falls in love with the Tara, beautiful and kinky lover of mad scientist Professor Gangreen, and finds that she’s quite normal – she’s a mutant tomato person and just one of an army Gangreen plans to use to conquer the world! Can Chad get the girl, beat the bad guy, and save us all? Will Gangreen’s army of tomato soldiers kill us all? Well, you’ll just have to watch the movie!

John De Bello, the same hilarious madman who made the original Attack of the Killer Tomatoes. The four (yes, four) Killer Tomatoes movies are the man’s only notable credits on IMDB, but there are worse legacies to have than cult favorite comedies.

Return of the Killer Tomatoes is an incredibly funny movie, with a brand of humor that is reminiscent of Airplane! The flick is definitely worth watching if you can find it, a worthy parody of low budget horror movies up to and including itself. 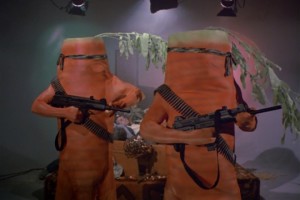 Oh, and stay through the credits. Trust me.

Category: TV & MoviesBy Chris WalkerSeptember 8, 2015Leave a comment
Tags: 1 Out of 5 Would RecommendKiller TomatoesReturn of the Killer Tomatoes