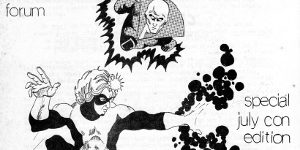 Almost fifty years ago a group of dedicated comic book fans came together in the city of Pittsburg, PA and formed the Pittsburgh Comix Club.  Their love of comics became almost legendary, as their group got together and dressed as comic book characters and attended local comic book conventions, almost before “cosplay” was even invented.  In fact, they also invaded the early seventies cons in New York, NY dressed as the Avengers and the Legion of Super-Heroes, since they had so many active members.  They also attended the famous Rutland, Vermont Halloween Parade, at least once.  I also understand that a number of their members made it to an early San Diego Comic-Con, as well.

So in their honor, I bring to your attention the only fanzine I own that was put out by this group, the Pittsburgh Fan Forum # 9, dated July 1975.  They published quite a few issues, but so far this is the only one that has made it into my collection.  This one is a special july con edition and therefore a bit larger than the normal issue.

Here is the cover, it is drawn by D. Mosser.  Sorry but I do not know anything about this fan artist, other than his signature on the cover, where it’s signed, simply, Mosser.  From an interior illustration it appears his or her first initial is D.  But I could be wrong. 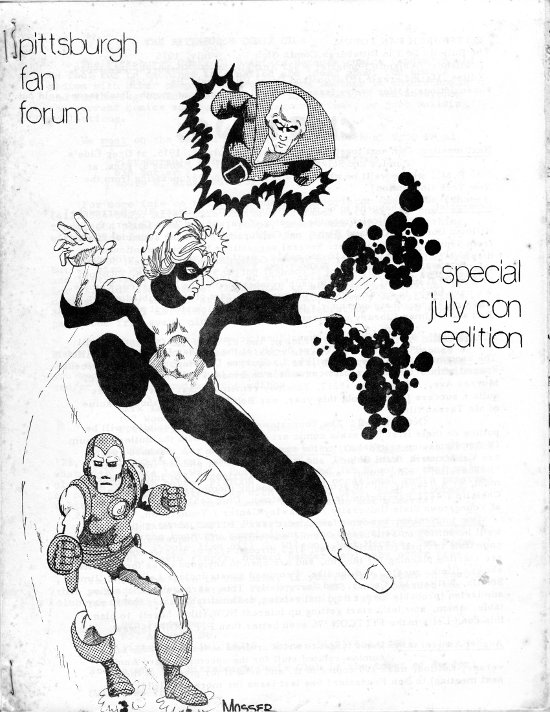 The club centered around Ben Pondexter, who is listed as the publisher of the fanzine.  The editor is listed as; Mark Lerer.  There is not much information available on the group, at least that that I was able to find on line, but I did find a post written by a former member, Gary Sassaman, who shared some of his memories of Ben Pondexter and the club.

It appears that the members met one Saturday each month at a small comic shop/used book store located in Etna, PA, right outside downtown Pittsburgh.  The shop was run by Greg Eide.  At the time he was a law student at Duquesne University.  It is my understanding that Greg is still selling comics, but in a much larger store in downtown Pittsburgh today.  Wow, now that’s dedication!

Ben Pondexter was the president and founding member of the club, who worked as a male nurse at a nearby hospital while involved with fandom and his love of comics.  Per Gary, the club’s slogan was; “Comics are the Good Times”.  And with that in mind, let me show you the back cover to the ninth issue, where you can see for yourself: 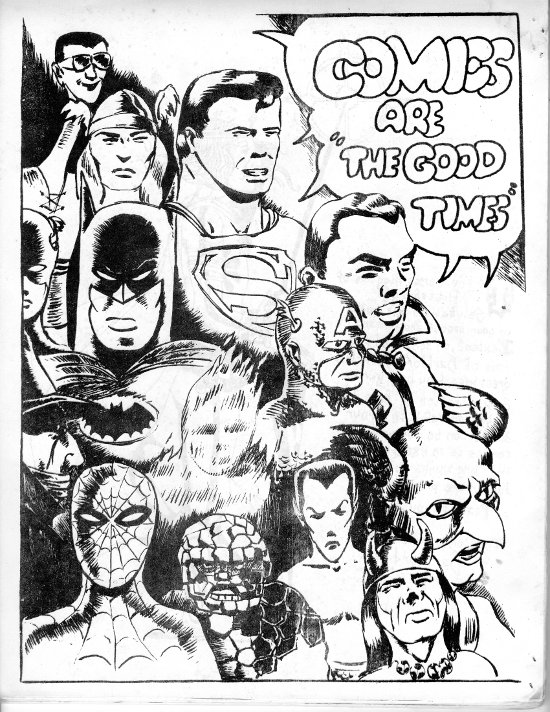 Sorry, but the back cover artwork is not signed and I could find nothing in the zine itself to identify the back cover artist.  Any club members still around who can shed light on the artist’s identity? Artist Howard Bender lived in Pittsburgh at the time and was also involved with the club, but I don’t think this is his work.

Within the fanzine itself is some great old ads for other fanzines of the day, a nice fold out science fiction illustration by someone named Lancaster, that was to big for my scanner.  On the reverse of this is an Adam Strange drawing by, I believe, Jerry Siegel.

There is a long interview with Marvel’s Roy Thomas, conducted by Howard Bender.  There is an illustration by fan, Jim Pinkoski, of Conan the Barbarian, based on Marvel Comics.  There is a one page focus on Tom Fagan.  In my copy is also a six page letter from Mr. Fagan, himself, folded and inserted.  I’m not sure if the fanzine came with this, or if the former owner, just stuck it in the fanzine, as there was also another convention program stuck in the fanzine that had nothing to do with the Pittsburgh comix club or there convention be promoted in this issue.

So, as I mentioned earlier, this issue of the fanzine was the special July Con edition, and as such, included information on the Pittscon ’75 comic book convention held at the University of Pittsburgh.  Here is the interior cover for that event: 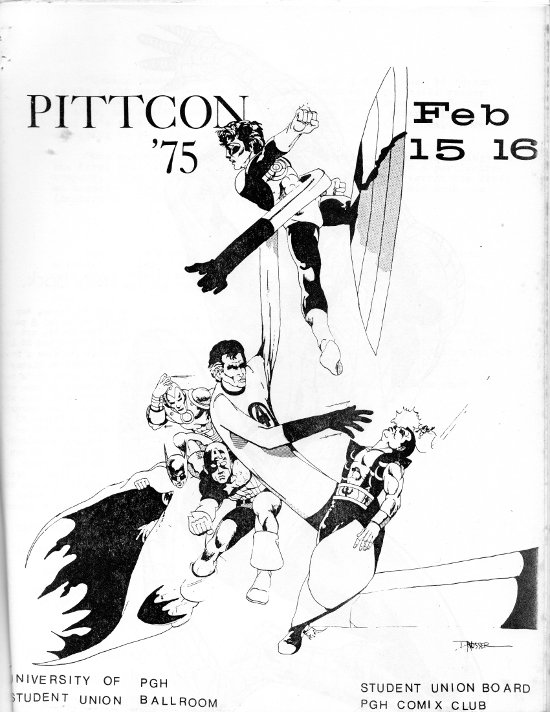 And since they included the two day program, I can share that with you, as well.  Take a look: 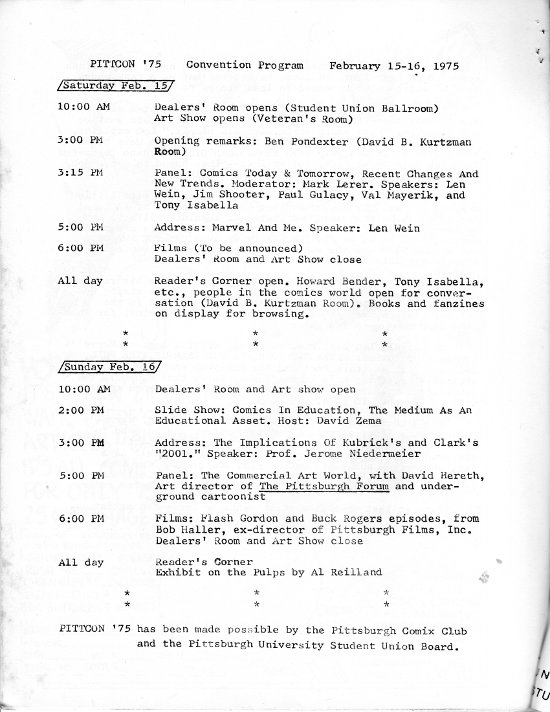 As you can see, they had a nice selection of comic book professional guests.  Beginning with writers; Len Wein, Jim Shooter and Tony Isabella.  I know Shooter was from Pittsburgh, and also that Isabella was located in Cleveland so they were pretty much local boys.  Though in 1975 either one might have resided in New York.  Sorry, but I don’t know where Wein was born and raised.

On the artist side the guests were; Paul Gulacy, Val Mayerik and Howard Bender.  Not bad for a small two day convention in 1975.

The rest of the issue was made up of very short information articles and ads for other fanzines being offered at the same time, zines like The Collector and Tim Corrigan’s Superhero C0mics.  It is not the most professional fanzine in my collection, but the love of the members for comic books shines throughout.

I’d love to own other issues of this fanzine, if anyone out there has copies and would consider parting with them, maybe we could work something out in cash or trade.  I’m always looking for old fanzines so drop me a line!

That’s all folks for this issue of Fabulous Finds, but please come back next week for a new RETRO REVIEW.  I’ll be looking at a comic from a publisher other than Marvel or DC, so hopefully you’ll come back.  Till then, be seeing you …