1 out of 5 – Would Recommend: Captain America II: Death Too Soon 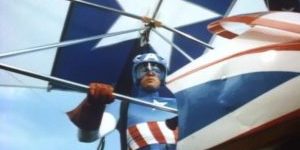 Revolutionary terrorist Miguel kidnaps a government research scientist to create a biological weapon that will accelerate human aging to a lethal degree. He plans to use it to hold the city of Portland, Oregon for ransom and kill all its inhabitants if his demands go unmet…but luckily for the future of ironic beards and needlessly artisanal goods, Captain America is on the case! 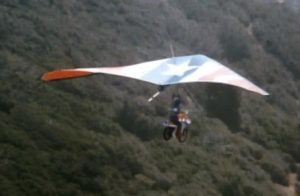 Who needs The Falcon when you have a sweet hang glider?

Universal Television for CBS, both the studio and network behind the classic Incredible Hulk TV series starring Bill Bixby and Lou Ferrigno. This movie was aired in the same year as last week’s, and it seems as though they were intended as precursors to a series much like the Incredible Hulk and Amazing Spider-Man TV movies had been. Unfortunately, these flicks just aren’t that good and – like other Marvel TV movies – it didn’t get picked up.

Which is a shame, because even one full season of Reb Brown running around as Captain America would have been great.

Like the first movie, this one is a pleasantly cheesy way to waste an afternoon. Reb Brown’s Captain America is no longer hyper-mellow, they do a much better job is showing off Cap’s superhuman powers, Christopher Lee makes a compelling villain (though his screen time is limited), it is – overall – a better film than the first.

It’s also the thinnest kid at fat camp, but that doesn’t mean it’s not fun. 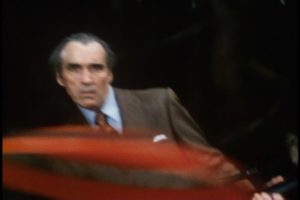 It takes a skilled man to dodge something that was clearly three feet away from him.

NEXT WEEK: We’ll watch Reb Brown do what he does best – scream and overact – in 1989’s RoboWar!