1 out of 5 – Would Recommend: Captain America I 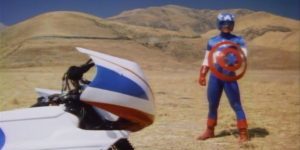 Welcome back to 1 out of 5 – Would Recommend, where we’re celebrating Captain America’s big week! The next film in his series, Captain America: Civil War, comes out Friday and return of Steve Rogers to the winged mask happens this Saturday with CAPTAIN AMERICA #1 FCBD 2016 EDITION (available at your favorite purveyor of comics and collectibles, I.E. Back to the Past), so we’re watching his very first feature:  1979’s Captain America TV movie!

Ex-marine turned super mellow artist Steve Rogers is given his late father’s FLAG formula after a nearly successful attempt on his life by some bad dudes with even worse plans. He finds out his dad was the “super crime fighter” and government agent nicknamed Captain America and adopts the identity for himself to put an end to their criminal conspiracy. Since they were trying to kill him to avoid exactly that, they’d have been better off ignoring him. 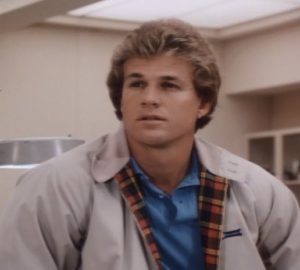 The character is like if Matthew McConaughey was Captain America.

It was a TV movie, so it was mainstream and we don’t really care. The star of the picture, however, is Reb Brown. He’s playing Steve Rogers as a mellow, hippy-ish surfer-dude type, which is of course not his fault. He does an OK job, but it’s a weird choice for Captain America and it’s pretty far from Reb Brown’s best known character type…but he’s still Rip SteakFace at heart.

This flick is a mixed bag. The pace (like Captain America) is far more mellow than it should be, resulting it in being somewhat slow. On the other hand, the sheer cheesiness of makes the parts that do move pretty fun. There are better so-bad-its-good Marvel TV movies, but it is definitely worth a viewing. 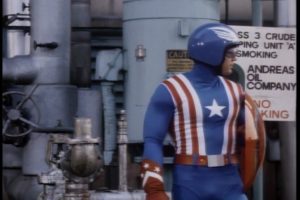 He does get a more comic accurate costume, in the last minute or so.

NEXT WEEK: The sequel to this film, 1979’s Captain America II: Death Too Soon!