1 out of 5 – Would Recommended: Space Mutiny 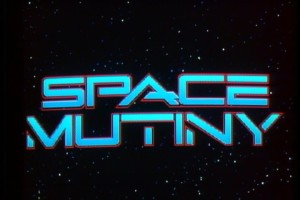 Welcome back to 1 out of 5 – Would Recommend, where Reb Brown is the best Captain America…Ok, not really, but he’s great! Today we’re talking about what may be the man’s most famous movie, 1988’s Space Mutiny!

Heroic pilot Dave Ryder (Reb Brown) joins the crew of the Southern Sun, a generational ship that is totally not the Galactica, just in time help put down a murderous space mutiny! Along the way he romances the commander’s daughter, takes part in a high speed go-kart chase, and screams a lot. 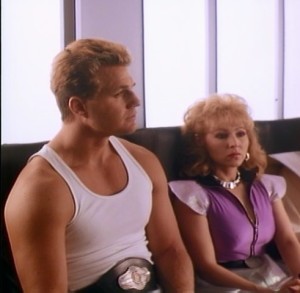 The producer of Firehead (a movie destined for inclusion in this column), but that’s not important. Once again, the star is the reason to see this – it is Reb Brown at his Reb Browniest, full of musclebound screaming and utter ridiculousness. For bonus points, his love interest is portrayed by his real life spouse, Cissy Cameron.

Space Mutiny is incredibly funny, though not in an intentional way. The good special effects are lifted from a better movie, the ship’s run by Santa Claus and Sting impersonators, and absolutely everything – from the hair to the computer equipment – is so 80’s that you’ll forget the USSR fell. And if you’re hesitant to watch the movie clean, you’re in luck: this movie was used in one of Mystery Science Theater 3000’s funniest episodes (whole episode here), serving as a great intro to the show for newcomers. Go forth and check it out, bots or no bots.

NEXT WEEK: Two of the best Asian pop culture products of the disco decade collide in 1975’s Super Inframan. 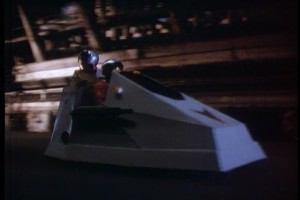 “Wait…what did he mean by ‘a high speed Go-kart chase’?”