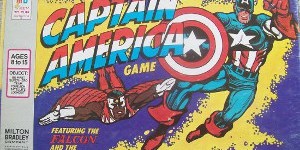 Thanks for returning for a new Fabulous Find this week.  I thought I would again look at something I own that’s just a little bit different than just a comic book or a fanzine.  So I’ve pulled out my copy of the 1977 Captain America game featuring the Falcon and the Avengers which was put out by the Milton Bradley Company.

But I do own the Milton Bradley board games from 1977 through 1980.  Besides the Captain America game, there is; The Amazing Spider-Man game with the Fantastic Four (also from 1977), The Incredible Hulk game with the Fantastic Four (1978) and Marvel Comics Super Heroes Strategy Game (1980) which featured “super heroes versus super villains in an exciting battle of wits.”  Hey, you better believe it, the cover says so!  If there is any interest, I can do posts on these games in future Fabulous Finds.   Just let me know!

But back to the Captain America game I’m suppose to be writing about,  Here is the box: 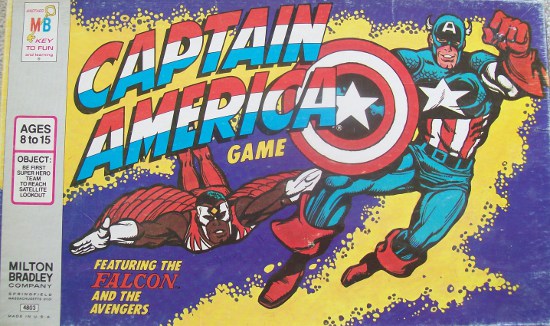 I don’t think this game is that hard to find, even thirty-eight years later, though sometimes all the pieces may not be there.  In fact eBay has three listed as I type this post.  The lowest priced one is $25.00 and the highest priced one is $55.00.  I do not remember exactly when or where I picked up my copy of the games, but I know I paid somewhere between $5.00 and $10.00, and it’s complete, as well.

So let’s next take a look at the most important piece the game.  It’s the game board that makes these old games worth collecting, at least in my opinion.  The game themselves are aimed at children, not adults.  In fact this one says it’s for ages 8 to 15.  The words below the age suggestion say; “Object: be first super hero team to reach satellite lookout”.  So in a nutshell, that’s the object of this “race” game.  Here’s the actual game board:

As you can see, it comes with a very cool Captain America themed shield spinner, shown at the bottom left of the picture above.  In the upper right hand corner of the picture, you can see the individual marker pieces.  Each team is made up of both Captain America and the Falcon.  There is a blue, green, red and yellow team, as indicated by the colors of each base (shown above are green and yellow).  The game is intended for 2, 3 or 4 players.

As you can also see by the game board above, Captain America and the Falcon are predominately featured, but the Avengers are represented by Iron Man, Yellow Jacket, Hawkeye, the Scarlet Witch, Thor, the Vision and the Wasp.  Villains featured are; Batroc the Leaper, M.O.D.O.K., the Red Skull, Baron Zemo, the Mandarin, Doctor Doom and Dr. Faustus.  The only one I take umbrage with, is the Mandarin.  Who is/was strictly an Iron Man’s foe.  I don’t even remember the Avengers going up against the Mandarin.  But then again, my memory isn’t what it used to be either!

I love the fact that the game instructions, which can be found printed on the inside of the top lid, tells the game player that; “Captain America, our hero, is a symbol of all that is good, true and honorable.  He whips ruthless supervillains and crushes evil and corruption.  Clothed in red, white and blue, with a star on his chest, Captain America carries as his only weapon, an indestructible shield.”  That does a pretty darn good job of summing up Cap in a nutshell.

Milton Bradley continues by saying; “Captain America and his companion, the Falcon, are helped by their Avenger friends and hindered by their enemies.  Try to be the first to overcome the tricks of the supervillains and reach the Satellite Lookout.”  The first player to land both playing pieces at the Satellite Lookout wins the game.  There are a couple of finer rules that occur during game play, that effect the outcome, but I won’t try to explain them here in this post.

Anyone want to play?

Let me know if you’d like to see the other board games I mentioned and I’d be happy to feature them in a future Fabulous Find.  Hey, even if I don’t here from you they just might turn up sooner or later.  Hey, I only have so much stuff I can write about!  Please come back next week for a new RETRO REVIEW, as well as, in two weeks for another Fabulous Find.