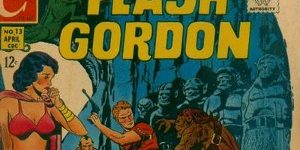 Welcome to a new RETRO REVIEW!  This week I’ve unearthed a Charlton Comics comic book for us to take a look at.  The comic is: Flash Gordon # 13, cover dated April 1969.  Charlton had just assumed the publishing of this character, as the first eleven (11) issues were published by King Features from September 1966 through  December 1967.  Charlton took over with issue number twelve (12), cover dated February 1969, so this was there second issue. For the record Charlton only manged to publish seven total issues of Flash Gordon before stopping (issues 11 – 18).

Here is the cover to the issue I’m discussing: 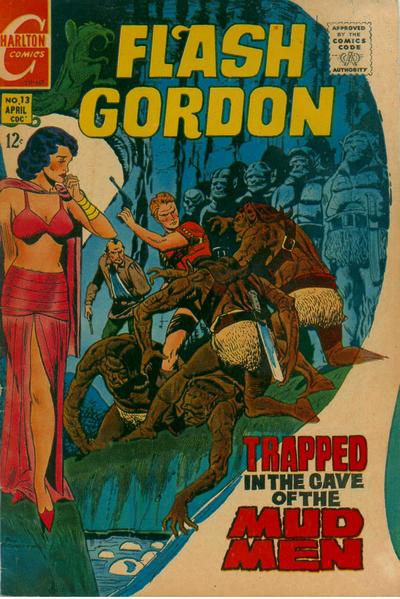 The cover is nicely drawn by artist, Pat Boyette, who provided both pencils and inks.  Though the cover illustration features the second story in the issue, rather than the first.  I wonder is they got the stories switched around during production, or if they had two covers drawn and picked this one, as the powers that be liked it better?  Which ever it was, it is a nice cover with Flash and Dr. Zarkov battling the Mud Men with Dale Arden in the foreground.

I’ll get to this story a little while, but first is the opening story, entitled: “Monster Men of Tropica!”.  The story is not credited in the comic, but is written by Bill Pearson, based on my research.  And the artwork, both pencils and inks are by a young Jeff Jones.  I suspect this was one of his earliest sales.  You clearly see his style, but it not quite as good as he will become in the future.

The fifteen (15) page story opens with Flash and Dale visiting Tropica, a lush continent on the Planet Mongo.  Flash and Dale are riding to warn a village that a flood is coming, so that they can escape from the valley they live in that isin the flood’s path.  On the way Flash and Dale are attacked by the men of Kapachos.  Flash is separated from Dale and is forced to flee his attackers.  While fleeing he stumbles upon the women and children of the Kapachos.  They explain that the last flood waters have driven their men insane.

Flash gets direction to the men’s camp and leaves to rescue Dale, which he does, but only after the flood waters are upon the valley.  So the rescue takes place underwater, which is pretty exciting.  The story is a little loose and the art, as I mentioned earlier is also a little loose, but still it is an enjoyable read.

The second Flash Gordon story is the one on the cover; “Trapped In The Cave of The Mud Men”.  It is written by Joe Gill with pencil and inks by cover artist, Boyette.  This nine (9) page story opens with Dr. Zarkov seriously ill from a poisonous plant and apparently only the mud from a certain Templor Cave can provide the antidote.  So, of course, all three of them, Flash, Dale and Zarkov fly to the cave where only one man has ever returned from.

Also, of course, the healing mud pits are found deep inside the cave, not near the opening.  The three go deeper and deeper into the cave in search of the mud when they are captured by the Mud Men from the title of the story.  They are sentenced to death and Flash fights back.  It is then he discovers that the Mud Men disintegrates if submerged in water!  Duh, who have thought that?

So to escape our three heroes dive into an underground stream and are carried out of the cave to safety.  Of yeah, and apparently one of the Mud Men who captured Dr. Zarkov was holding him by the arm that the poisonous plant had injected it’s poison and just the touch of the Med Man cured Zarkov!  Wow, wasn’t that convenient!  The art is nice in this story, but the story itself leaves quite a bit to be desired.

I picked up the comic because of the Jeff Jones artwork, but you’ll have to decide for yourself if it’s worth adding to your collection.  The good news is that this issues doesn’t cost that much, though may be a little tough to find.

That’s it for this week’s RETRO REVIEW but be sure to tune in next Friday for a new Fabulous Find.  Be seeing  you …