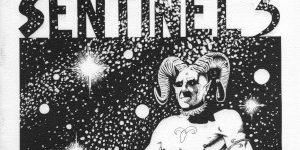 Welcome back fans, friends and family to another edition of Fabulous Finds.  This week I’m sharing a fanzine from the Spring of 1972.  It is the third issue of Sentinel, or Sentinel # 3, if you prefer.  This fanzine was published by fan Randy Emberlin of Portland, Oregon.

It features an outstanding cover drawn by William (Bill) Stout.  Please take a look below, at the end of the text for the front cover image.

Within the front cover is the Table of Contents, as well as, a nice little space alien drawn by Ed Romero.  Also Emberlin provides an art key, i.e. listing the artists represented within and the pages that their work appears.  I always found this to be an excellent feature within fanzines, as you could quickly find a particular artist’s work when just scanning or flipping through the fanzine.

Things kick off on page three (3) with an Editorial, as well as, a picture of editor/publisher Emberlin.  The meat of the issue begins on page four (4), where begins a five (5) page interview with fan artist William Stout.  The interview is liberally illustrated by Mr. Stout.  Also included is a picture, as well as, a self portrait, of the artist!

Following this is a six (6) page sequel to the Jeff Jones Thane the Barbarian  comic story from Creepy # 16, that Stout both wrote and drew; entitled; Quest Of Thane!”  Bill did this story at the age of seventeen and he sent it to Jim Warren, but it was not accepted for publication.  So Warren’s loss was Emberlin’s gain!

Following this is a ten (10) page comic strip entitled; Sorcera, which is written and drawn by Don Hazeltine.  It is planned to be a continuing strip, but as I do not own issue # 4 of this fanzine, I do not know if it was ever continued, or not.  It tells an interesting story with pretty nice fan artwork.  I hope further installments were published, as this had potential.

The inside of the back cover contains pictures from the 1971 San Diego Golden State Comic Convention.  One features the King himself, Jack Kirby, who gave a chalk talk at the show.  One of the pics shows a young Bud Plant at his table.  I don’t know about you, but I always enjoy seeing photos from these old cons.

And finally, the back cover is done by Stout, as well.  Check it out below, beneath the front cover image.