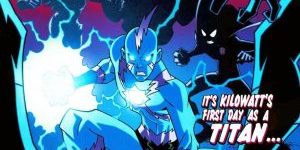 It’s a new category I’m calling a Crisis on Multiple Earths. It’s the most common way that the multiverse gets adapted into Other Media, since it involves crossing the “real” main characters into another universe. In this case, we see two Royale With Cheese universes – one that’s a standard Mirror Universe subtype and one that’s just plain different.

The Teen Titans’ honorary member, Kilowat, has been stranded on their Earth for some time and Raven has finally figured out a way to send him home. Or at least she thinks she has, instead she’s accidentally sent him to a world where the evil Teen Tyrants look for new places to terrorize – and the Teen Titans just demonstrated multiversal travel for them.