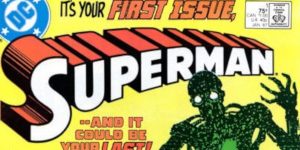 Hey everyone, welcome to a new RETRO REVIEW. This week I’ve pulled out the cover dated, January 1987, issue of Superman # 1 from DC Comics. This is the, dare I say it, reboot, or renovation, of the Superman titles after sales had plunged and the Superman titles had languished for far to long.

To his amazement, DC went along with everything he proposed, and thus was a brand new Superman number one born! Here is the cover to that first issue, penciled and inked by John Byrne:

The story within is entitled; “Heart Of Stone” and it is written by Byrne, penciled by Byrne and inked by Terry Austin.  The splash page shows Superman bursting through a lead lined wall into what appears to be some sort of laboratory.  To his surprise, he finds it empty.  Upon exploration, Superman finds a room that appears to be a shrine to himself.  This room contains pictures of him and even  precise measurements.

Upon further exploration, Superman finds a body.  The man had been killed by having his neck snapped, per Superman’s microscopic vision.  Obviously, this whole thing is a mystery to Superman.  And so as not to have any of this information  be revealed to the public, Superman chooses to take the complete building and the ground around and under it and place it in space.  Where it will remain until Superman decides what to do with it.

Supes returns to earth, switching to his Clark Kent identity, he joins Lois Lane jogging in the park.  While jogging they encounter a “super” powerful man breaking attempting to rob a bank.  The man is Metallo and he tells Lois that he is the man who will kill Superman!

Metallo tosses Kent aside, which allos him to cjhange into his Superman togs and return to square off against Metallo.  Unfortunately, Superman gets the worse of the encounter, as Metallo pretty much wipes the floor with Superman, even coming close to choking him to death!

At that moment, the Metropolis police arrive and gun down Metallo, saving Superman.  But wait… Metallo is actually unhurt and in a flashback sequence, we find out that Metallo was once a man, but now is a Kryptonite powered andriod.  It is he who killed the man in the lab that Superman found at the beginning of the comic.

Once again Superman and Metallo battle with Superman getting the short end of the stick.  Then Byrne briefly switches scenes to show the reader Lex Luthor, high above Metropolis, in the Luthor Towers, where is is told that Metallo is about to kill Superman.  Of course, being Lex Luthor, this won’t do, as only he can kill Superman, at least in his own mind, this is the case!

The battle comes to a conclusion, with the no longer human looking Metallo standing above a beaten Superman, with his Kryptonite heart revealed.  Superman is thoroughly beaten, and as Metallo stands over him gloating, he suddenly disappears.

Superman is saved by a mysterious benefactor.  Who can it be?  Yeah, you probably guessed who, but the reader doesn’t find out this issue, as it ends right here.

Thus ends the first issue of the new Superman comic book in fifty years.  Not a bad story beginning and the art is excellent.  A pretty good beginning for this 1987 reboot.

Thanks for stopping be for this RETRO REVIEW and please return next week for a new Fabulous Find.  til then …