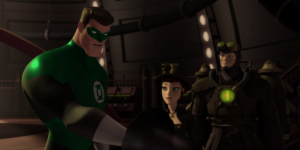 Welcome back to Strange Times & Places, where we’re getting the most out of my DC Universe subscription with “Steam Lantern”.

Well….it’s a canonical Imaginary Story of a sort. Hal “Green Lantern” Jordan is sent through a rip in space to a parallel dimension during a battle with the Anti-Monitor and finds himself on the last world that the monster had terrorized. It’s a steampunk world of British accents, protected by a singular hero named Steam Lantern and ruled by the tyrannical Duke Nigel Fortonberry.

Hal has to find his way home AND help Steam Lantern save his world from Duke Fortonberry, a plot synopsis that sounds straight out of the Silver Age.

Come Back Next Week for a New Tokusatsu Gesundheit!