Fabulous Find: I Want To Hold Your Hand, Beatles 45 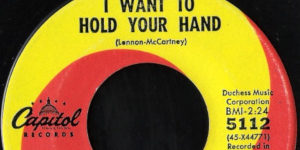 Well, it was fifty-five years ago this month that the Beatles broke huge in the United States. The group itself had been around for about six years at this point, but had only taken England by storm the previous year. There had been a number of single records (i.e. 45s) released by the Beatles here in the States during 1963 on labels like Vee Jay and Swan Records, but the general public just didn’t get to hear these records much. Then between releasing I Want To Hold Your Hand on Capitol Records in December 1963 and the Beatles first appearance on the Ed Sullivan Show in February of 1964, things were never the same again. Beatlemania had landed full force in America!

Here is the picture sleeve the record came in, if you were lucky enough to find one:

Side A, on the Capitol label, looks like this:

The flip side, or Side B features this song:

As I said above, with the release of this single, there would be no stopping the Beatles. They stormed America and the world, becoming the top group across the world for the next six years, before finally breaking up and going their separate ways, as four individual musicians.

The individual Beatles went on to have wonderful individual careers, but their individual parts didn’t quite seem to add up to the whole that were the Beatles! At least in this fan’s opinion.

Anyway, that’s this week’s Fabulous Find, hope you enjoyed it and return next week when we do it all over again with another Fabulous Find or a RETRO REVIEW. be seeing you …