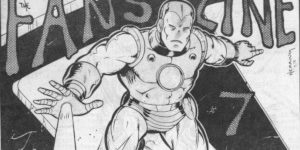 Glad you made you way here, either as a returning customer (so to speak) or as a new visitor. I’ve got a nifty little fanzine for you this week. It’s Fan’s Zine # 7 and it was published by J. and J. Enterprises in 1978. It’s dated in the indicia as Winter 1978, as a matter of fact. The Editor was Jay Van Bockel, who I suspect was one of the J’s in J. & J. Enterprises!

The fanzine is a whopping forty (40) pages and crammed full of nice articles about comics and lots and lots of great fan artwork. Here is the cover, provided by Doug Herring.

As you can see, it features Marvel Comics‘ Iron Man battling the Controller. The back cover, which I have not shown is of Marvel’s Doctor Strange, drawn by Mark Heike.

The inside cover is a nice Phoenix drawing by the Brothers Hernandez, then there is a Table of Contents and the indicia information beneath. An editorial begins on page four (4), but continues onto a later page, wehre it finishes. Page five (5) has a great Brothers Hernandez Iron Man drawing, it’s so good, that I’m going to share it here with you.

Following this illustration is a two (2) page Iron Man article. Next up is a single page entitled; The Gripe Page. It features one gripe from a reader named Jeff. The editor pretty much responds by agreeing with Jeff.

Then comes two (2) pages covering various media, for example a movie review of Close Encounter of the 3rd Kind. Some Incredible Hulk news and reviews about television shows, like Battlestar Galactica and Escape From Gilligan’s Island.

Next up is one (1) page of Fanzine news, touting zines, including; Afta, Phoenix & Excelsior for example. Following is one (1) page announcing the winner of their 2nd Annual art contest. 1st place winner was Mark Heike, with 2nd place going to Gilbert Hernandez. The very next page featured a Heike Daredevil (painting, I would guess) but it reproduced so badly you really can not get a feel whether Heike deserved his victory or not.

The following four (4) pages featured full page illustrations by various fan artists. Here is the best of those, drawn by Gilbert Hernandez.

Three (3) pages of fanzine reviews follow the art gallery. I believe editor Van Bockel wrote all of the reviews, including ones on The Fandom Trader, Nimbus and Afta.

Next is a full page Jack Kirby Captain America and the Red Skull drawing that was inked by Mike Machlan. There is a feature story on The Avengers, but it only runs one (1) page, so it is not in-depth at all. Accompanying this article are two (2) full page illustrations of said group. Here is one of those by fan artist, Carl Taylor.

On the same page is some Kiss (the band) news, and the next page is an illustration of all four (4) members of the band by Mark Riehle.

Next up is a two (2) page column entitled; Favorites, written by Jeff Roberts (the other have of J. and J. maybe?). Next up is a Star Wars page of information, followed by a full page Tuscan Raiders drawing by Gilbert Hernandez.

Things are finally wrapped up with a What’s In Store for Next Issue half page and a want ad, looking for Marvel Comics from Jeff Roberts.

A pretty good example of a fanzine from 1978. Though it definitely is a Marvel zine, but that’s okay, as I’m pretty much a Marvel guy! Thanks for stopping in and I hope you’ll come back next week for a new RETRO REVIEW or maybe another Fabulous Find.

Take care out there, be safe, stay warm and happy!