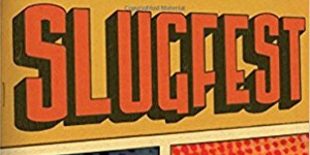 Greetings and Salutations all.  In this week’s Fabulous Find, I will be looking at a brand new book, just published by Da Capo Press.  The book in question is; Slugfest and it is written by Reed Tucker.  What’s it about?  Well, I think the cover says it all … “Inside the epic 50-year battle between Marvel and DC”!  I think that sums things up rather nicely, don’t you?

Here is the front cover.  This is the cover of the advance reading copy that I am reviewing, but presumably the final cover will be the same.  Take a look: 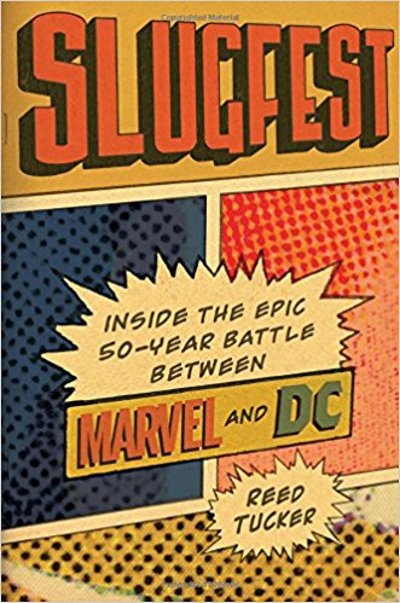 The book weighs in at 276 pages and is broken down into a Prologue, an Introduction, fourteen (14) Chapters and an Epilogue.  Plus Acknowledgments, Notes, an Index, as well as, an About the Author page.  Though my review copy doesn’t include the Index and the About the Author page for some reason.  So the actual book may contain a few additional pages.

The Prologue introduces the author as he writes about his first exposure to comic books during the mid-eighties.  The introduction states simply … “This is a story about innovation.”  Reed goes on and states that comic books are a business.  Well duh, obviously, though we comic book fans like to treat/believe it is something else, if we are truthful.

In his introduction, he goes on to state that; “as with any business, innovation is everything.”  And that; “more often than not, the company with the best ideas is the one that comes out on top.”  Seems pretty straight forward, but not necessarily true!  There are a lot of comic book companies that are no longer in business even though they might have had great/innovative ideas, but were unable to pull them off, or didn’t have the financing to make their ideas a reality.

The book is about the rivalry between Marvel Comics and DC Comics and Reed doesn’t chose to look at any other companies in this book, other than to occasionally mention them, such as Image Comics, which started in the nineties by some of the red hot young artists at Marvel.

Let me say that I enjoyed Reed’s book from the start, though I really didn’t learn that much new information from reading it.  I’ve been reading comics, Marvel, DC, Image, First, Pacific, Dark Horse, Archie, Dell, King, Tower, Malibu, etc since the early sixties, and have been involved with comic fandom at various times, reading, writing and drawing for fanzines at one time or another during that time, so I would guess I’m a pretty well informed reviewer in this area.

I like that Reed puts things in prospective with his first chapter, starting in the forties and fifties, with where DC (then National), and Marvel (then Atlas) stood in the publishing and market place.  He’s right, National owned the comic book business during those times.  Atlas almost went under with all the other comic book companies during that time.  Chapter one is pretty much all about National.

In chapter two, Reed focuses on Atlas/Marvel Comics and even brings up the fact that National offered to buy Atlas’ three biggest heroes; Captain America, Sub-Mariner and the Human Torch.  But then publisher, Martin Goodman decided not to sell them.  Reed goes on to cover the beginning of the Marvel Age of Comics under Stan Lee, with the help of artists, Jack Kirby and Steve Ditko, as well as, others.

He goes on, taking a look at the characters that each company produced that were very similar in powers and tone, such as DC’s Doom Patrol and Marvel’s X-Men and later with Marvel’s Man-Thing and DC’s Swamp Thing.

Reed has interviewed quite a number of the writers, artist and editors from each company and he provides insights into what was going on with each company through the years.  He tells of Marvel’s ascendency and DC’s fall during the late sixties.  He writes of DC’s failures to compete with Marvel and their “theft” of Jack Kirby from Marvel, as well as, other writers and artists who jumped back and forth between the companies, first having to use pseudonyms then later, finally able to use their own names in the credits.

Tucker also covers the times when Marvel and DC cooperated with each other to produce the 1970’s Treasury editions featuring cross-overs between their biggest heroes!  Followed by the animosity between the editors and companies which prevented the original Avengers vs the Justice League of America cross-over book.

He spends time on the movie and television franchises of each company and pretty much “tells it as it was”, beginning with the Batman television show and the first Superman movie.  He covers the battle between the two companies at the newsstand, as well as, at the comic book shops that came into existence in the seventies.

One time period that I didn’t know much about the behind the scenes goings on, were the nineties and Tucker does a nice job covering that time period. This was the area where I most gleaned additional information that I previously wasn’t aware of.  This is found in Chapter 12, entitled; “The War Gets Uncivil”.

Reed goes on and writes about the current trend of DC rebooting every couple of years and Marvel’s habit of tweaking their Universe, but not actually doing a full reboot.  But then again Marvel Comics has always been more committed to  their continuity than DC, though DC has certainly tried since the seventies, though somehow, have always come up a little short for whatever reason.

So like in the comics, when two heroes, or teams, battle it out for bragging rights, who won?  Well, Tucker doesn’t actually declare a winner.  Really how could he?  In terms of sales Marvel seems to be the current winner, but in regards to the value of it’s characters, DC, with Superman, Batman and Wonder Woman, likely come out on top.  Those three heroes are household names in homes that don’t even know who the Fantastic Four or the X-Men are.

So like the age old battle between Thor and the Hulk, or the Superman – Flash races, who’s the winner?  Or with Marvel fans debating DC fans, whose comics are the best?  I say it all depends, and the winner today just might not be the winner tomorrow.

Well done, Mr. Reed Tucker.  You’ve written an absorbing book about the rivalry between DC and Marvel that I hope a lot of people will give a try, and then make their own interpretation as to who’s the winner in this comic book company rivalry!

But here and now, I declare your book a winner!

Thanks for stopping by for this week’s Fabulous Find and be sure to return next week for another RETRO REVIEW.

This is Greg Turner, and I’ll … be seeing you …