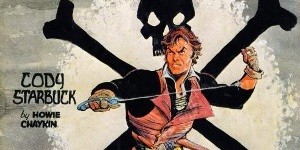 The cover to this first issue is done by Howard (Howie) Chaykin.  Take a peek: 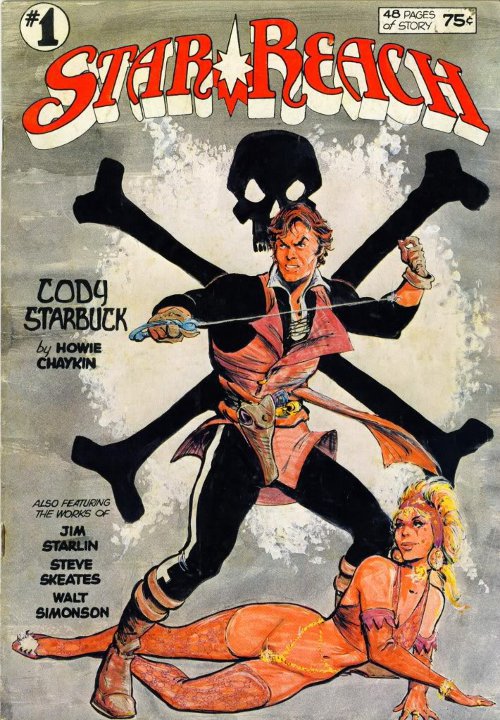 It’s a pretty nice package and only cost 75 cents back in 1974.  I believe the book was eventually reprinted, featuring the Jim Starlin back cover, as the new front cover, and cost more.

The book opens with an editorial by Friedrich explaining why Star*Reach has come about, then jumps right into a terrific story written and drawn by Jim Starlin, entitled; “The Birth Of Death”.  It’s eight (8) pages long and has a bit of a twist ending for those of you that enjoy that type of story.  It features God, the angel Lucifer, as well as, mankind, plus features the “origin” of Death!

Next up we get the story entitled; “Death Building” also written and drawn by Jim Starlin.  It’s seven (7) pages long and also features the character, Death.  In fact Jim Starlin plays a cameo part in the story.  It’s got a neat ending that I won’t give away here.  Buy the book!  You can find copies on eBay for not much money,

The next two (2) strips/stories are written and drawn by Steve Skeates.  They are each two (2) pages long and frankly, it’s “not my cup of tea”.  Obviously I’m not a fan of Skeates’ art style.  The first is called “Fish Myths” and the second; “Suburban Fish”, and both are about fish!

Next up is a nice story entitled; “A Tale Of Sword & Sorcery” written by Ed Hicks and drawn by Walt Simonson.  It runs twelve (12) pages and it’s worth the read, at least in my opinion.  The last eleven (11) pages even offer a “flip book” like half inch strip running at the bottom of the page, and I do mean running!

This brings us to the cover featured story.  It’s simply entitled; “Cody Starbuck” and it’s written and drawn by Howard Chaykin and introduces the comic reading world to the title character.  The story runs sixteen (16) pages and is the longest story in the comic.  This first Starbuck story introduces the reader to a galaxy where two great empires had toppled due to a great war.  All that now remains are groups of people was fall into four (4) categories, 1) traders, 2) missionaries, 3) mime troupes and 4) pirates.  Cody Starbuck is one of the last category!

The story opens with action as Starbuck is fighting to free a woman who has been kidnapped and held for ransom.  It seems that his services have been hired by a wealthy individual to free his fiancee.  The fact that the individual is paying Starbuck ore than the cost of the ransom is ironic, but he’s proving a point.  Starbuck is successful and returns the girl to Lord Gideon.  WHile there he encounters the man, William Trachmann, who was responsible for costing Starbuck his commission and thus driving him into a life of piracy.

It turns out that Trachmann is up to no good and with help kills Lord Gideon and he sends an assassin to kill Starbuck.  At the last moment, Starbuck is warned of the threat and manages to do away with the assassin, after he finds out who sent him.  Starbuck rushes back, duells Trachmann and saves the girl, Evangeline, again.  They both repair to Starbuck’s ship, the Limerick Rake and the first episode ends.

The comic itself has one (1) more strip and it’s also written and drawn by Jim Starlin.  It’s entitled; “The Origin Of God!” and with just four panels on that page, clearly shows God’s origin!

And, as I mentioned above, the back cover is also drawn by Jim Starlin, but since it involves some nudity, I won’t show it , but it features Death and two of his hand maidens.  All on all, a very nice package, and as I said, it only cost seventy-five cents on the newsstands.  I highly recommend it to collectors of work by Starlin and Chaykin.  The series ran only eighteen (18) issues and was published from April 1974 through October 1979.

The character of Starbuck made a return appearance in Star*Reach # 4, dated March 1976.  He was also cover featured that issue.  As a bonus, here’s that cover, as well: 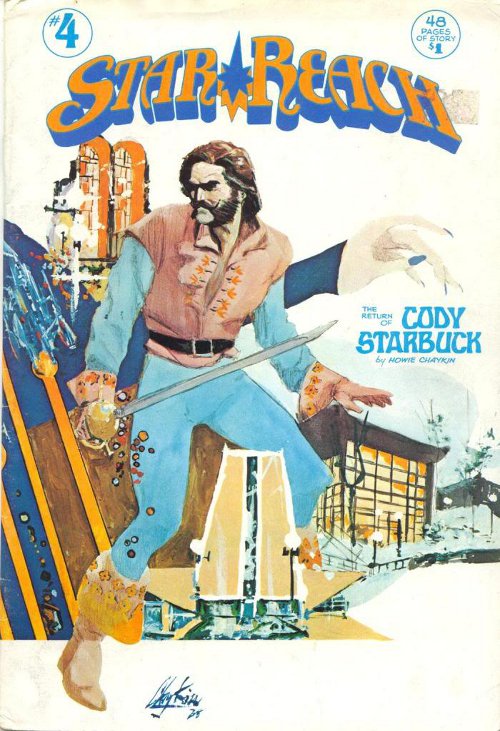 After that appearance in Star*Reach # 4, Star*Reach Productions publish as Cody Starbuck one-shot in full color, dated July 1978.  Here’s that cover too: 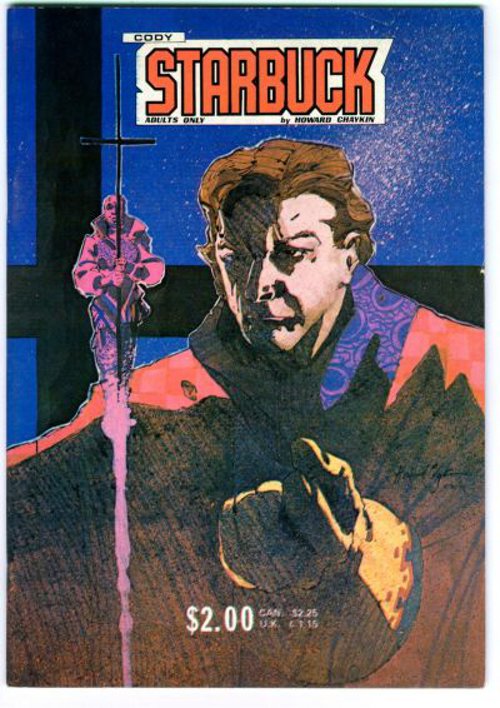 Personally, I don’t think the cover on this book is a good as the fist two appearances, though Chaykin drew all three. 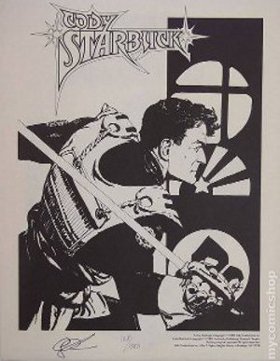 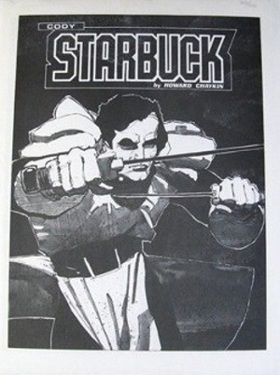 And that brings us once again to the end of this week’s Fabulous Find.  I hope you come back next week for a new RETRO REVIEW and again in two weeks for another Fabulous Find.  Stay warm and I hope your Holiday season is wonderful!