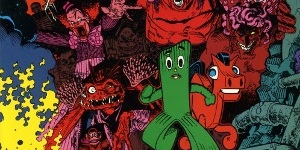 It’s Friday, so It’s time for a new RETRO REVIEW.  And I’m excited to bring you a fun comic book from the late, lamented publisher, Comico.  It’s dated December 1988, per the indicia, and the comic in question is; Gumby’s Winter Fun Special # 1.    The comic is written by Steve Purcell and the artwork is wonderfully pencilled and inked by, the great, Art Adams!  And of course, it stars Gumby and his friend, Pokey, as created by Art Clokey.

The summer before last, i.e. July 2013, I wrote about Gumby’s Summer Fun Special, so thought it was time to write about this second issue, i.e. the Winter Special.  If you’d like to check out my previous post, you can do so, by following this link: https://gobacktothepast.com/retro-review-gumbys-summer-fun-special/ , (you might have to copy it and paste it in to your browser, but please come right back here, so you can get the total picture.

Where is a good place to sell my comic book collection?

Okay, back?  So here we go, with “Gumby’s Winter Fun Adventure”, as this story is entitled.  The comic opens with Gumby and Pokey returning from the town’s dump with great finds that they intend to turn into new treasures, like turning a busted TV antenna into a scale model of the Cutty Sark, or an old hamster cage into a “swell” catcher’s mask.  On the way home they pass by the town’s toy mine, where miner’s are digging for new toys.  They’ve recently unearthed a vein of rubber dinosaurs and hope to find a vein of plush animals and Pee-Wee Herman dolls, in time for them to be refined and available for Christmas!

Oh yeah, I oughta show you the great cover, as drawn by the aforementioned, Art Adams.  Take a look: 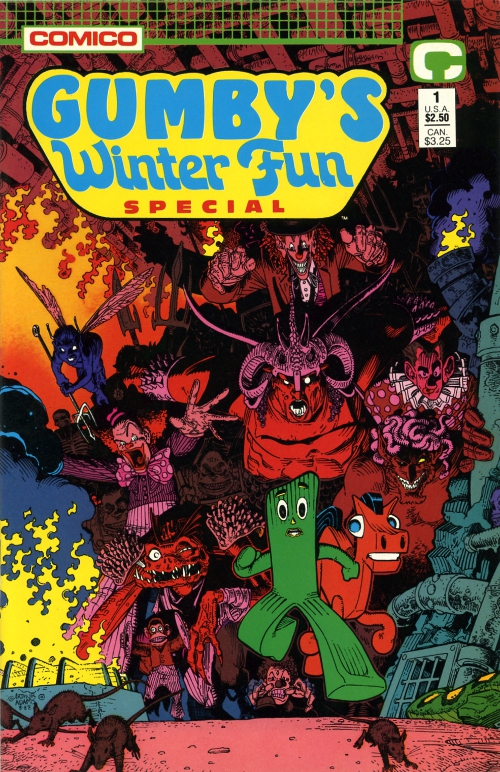 Now, back to this RETRO REVIEW.  While Gumby and Pokey are visiting, there is a cave-in in shaft seventeen, the etch-a-sketch shaft.  Unfortunately, some miners are trapped by the cave-in.  The foreman sends Gumby and Pokey for help.  So they rush home and Gumby uses the phone (because he can if it’s a real emergency) to call the police and the fire department.  Pokey meanwhile as gone into their shed and comes busting out in the “X-5, nitro-burning Dyna-Plunge Crust-Crawler sedan”, which he had ordered from the back pages of Hammerhead Comics (right next to the ad for X-Ray Specs).

Gumby and Pokey use the X-5 to burrow into the ground and break into shaft seventeen, but there are no miners to rescue.  It appears they have tunneled further underground, or were they taken by the mysterious mole people?  Gumby and Pokey, in their trusty X-5, decide to follow.  They once again break through into a hollow space, where they discover the miners, with the scary looking, but rather timed mole people.

The mole people tell Gumby and Pokey that they had taken the miners, hoping that they would help them rescue their friend, Ray Crabbe, aka Santa Claus!  But all the miners do is eat and fight amongst themselves.  The mole people ask Gumby & Pokey for their help and Gumby quickly agrees.  So once again it’s into the X-5 and they burrow down yet again.

The three valiant heroes soon discover Ray Crabbe, aka Santa Claus, who Art Adams draws to look like Sean Connery, for some reason.  Actually, this is one of my favorite things about the comic.  Ray is chained to a stone chair and the three kids are discovered by the Prince of Darkness’ minions (no, not those minions) before they can free him.

Gumby’s quick thinking saves them momentarily, by saying they are there to volunteer to join up with Beelzebub, and that they have their own pitchforks, and everything.  Gumby and Pokey are taken to see the “Big Guy” and Natasha remains out of site, so that she can free Santa from his chains (good thing moles have such sharp teeth, eh?).  While Gumby and Pokey are stalling the Big Guy himself, Natasha manages to free Santa and all Heck breaks loose!

But they’ve managed to resurface on the opposite side of the world, where large monsters are wrecking havoc, in what I suppose is, meant to be, Japan.  Crabbe/Santa finds a twenty story Gumby shaped robot and saves the day.  Santa flies them back to the other side of the world and drops Gumby, Pokey and Natasha off at Pokey’s home, where it just so happens, that the town  is hosting a Winter Carnival for the rescued miners and the friendly mole people.  So Gumby and Pokey are safe at home and Natasha is reunited with her mole parents, as well.

I guess, all’s well that ends well, as even Beelzebub and a couple of his minions are at the barbeque, and they have promised to be very, very good!  Thus ends this pretty curious adventure of Gumby and Pokey.

But that’s not all the fun, no siree Bob, take a look at the back cover, where Art Adams has provided paper stand-ups of Gumby, Pokey and various cave people, plus even a couple of dinosaurs.  Pretty darn cool, and if you were willing to cut up your comic, I’m sure these cut-outs would have provided hours of additional fun! 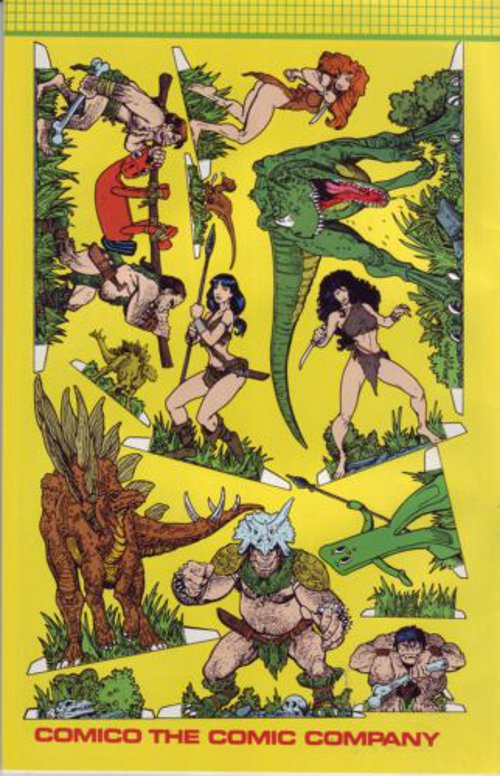 Hey, that’s it for this week’s RETRO REVIEW, but be sure to come back next week for another Fabulous Find, and of course come back in two weeks for yet another RETRO REVIEW.  Live long and prosper, umm … May the Force be with you, no …be seeing you.  Yeah, that’s the ticket … be seeing you!