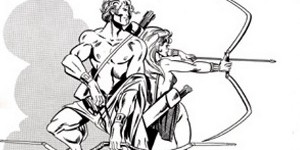 It’s time for a new Fabulous Find, and this week I’ll be looking at the three issue run of The Gods of Mount Olympus in Ancient Mythology.  The three issues were published by Quintessence Publications out of Spokane Washington in 1974.  I could find no date on the first issue, but issue # 2 was listed as May and issue # 3 was listed as July.  Each issue was published on newsprint in a large tabloid/treasury size.  Also each issue sold for one dollar.  Each of the three issues were adapted and written by Johnny Achziger with the art, booth pencils and inks done by Joe Staton.  Personally I think the art in these three issues is the finest that Staton ever did.  I know that’s saying a lot, but I stand by my words!

As I stated above, these issues were printed large, 11 by 17 inches large, and each issue contained sixteen (16) pages of beautiful art and a nice translation of the particular mythological story being covered.  Staton’s art does include full frontal nudity, so be aware of that.  With that said, at least in my opinion, it’s very tastefully done and is in no way is salacious or x-rated.  But again that’s my opinion, someone might be offended, I’d imagine, as someone always is.

The first issue is entitled; “Chapter One: The beginning Of All Things”.  Here’s the cover shrunk down for viewing better here on the blog:

The Gods of Mount Olympus # 1

This issue introduces the Gods of Mount Olympus, including Jupiter, King of Olympus, Juno, his wife, Mercury, messenger of the Gods, Neptune, ruler of all the waters of the Earth, Pluto, Lord of the Dead, Mars, God of war, Venus, Goddess of love & beauty, Minerva, Goddess of wisdom, Vulcan, God of fire & forge, as well as, Apollo, God of the sun and Diana, the huntress.  Achziger uses a storyteller to tell the story of the Gods and the creation of the Earth.  He tells of the Earth Goddess, Gaea and Uranus, God of the heavens and the war between the twelve Titans and Uranus.  He tells of Saturn’s rebellion against Uranus and his usurping of the crown of heaven.

He goes on to tell of Rhea’s hiding of her son, Jupiter, so that Saturn would not eat him, like he did his other children.  Yep, that’s the facts, Jack!  He ate his children, so that they would not rise up and overthrow him, like he did his own father.  Years later, Jupiter returns and defeats Saturn, who is force to vomit up his other children.  Again, I’m not making this up!  Go read you mythology!  Before the end of the first issue, the Titans return to wage war on the Gods of Mount Olympus, but they are defeated and as special punishment, Atlas is made to hold up the Earth on his shoulders.

That’s a whole lot of story compacted into only sixteen pages!  But it does indeed tell the story of the beginnings of the Gods of Mount Olympus, as advertized, so you certainly get your maney’s worth and also sixteen pages of gorgeous art by Joe Staton to boot.

Here is the first interior page form issue one: 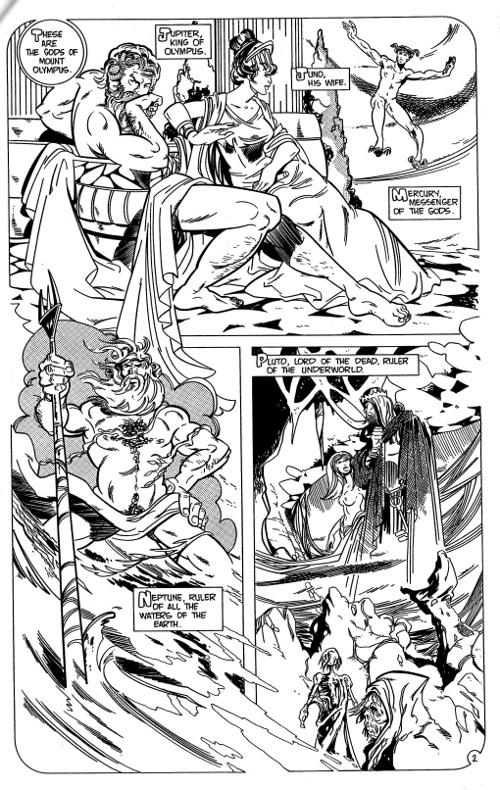 Some people, including myself, love Staton’s artwork on Charlton Comics‘ E-Man, others adore his later work at DC Comics, and as good as that is, I think this is better in all it’s black and white glory!

Here is the cover to the second issue: 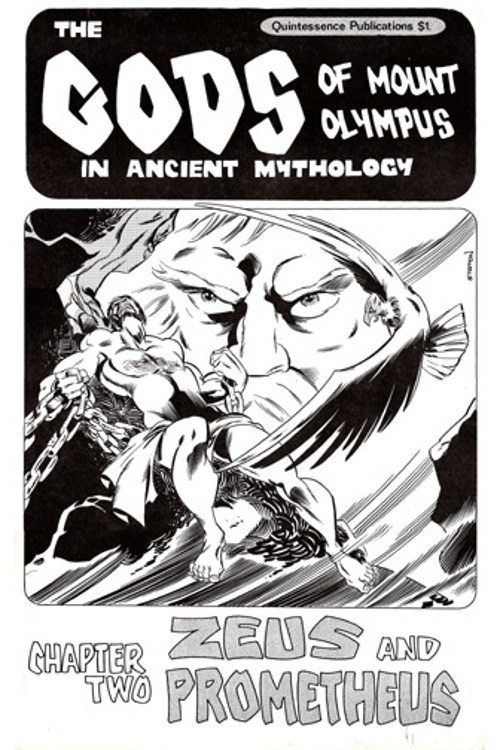 The Gods of Mount Olympus # 2

This issue is entitled; “Chapter Two: Zeus And Prometheus”.  Again it is written by Achziger and drawn by Staton.  This issue begins with the storyteller telling the story of Prometheus, and his battle against his brother Titans.  After the ten year war was won, Zeus gives Prometheus a new mission, to create a being that is superior to all the animals and who will rule over them on Earth.  Prometheus creates “man” from clay and Athena endows the clay with a soul and thus the first man was “born”.

As man grew in number, they also grew in pride.  Prometheus sides with man and tricks Zeus, and in his anger, Zeus withholds fire from man.  Prometheus plots to steal fire from Apollo’s chariot of the sun and succeeds.  Zeus finds out and captures Prometheus and chains him in the mountains to be forever fed on by vultures.  In the mean time, Hephaestus is called upon to create a smaller and softer version of man, and thus woman is born.  The first women is called Pandora.

Yep, you guessed it, one day the God, Mercury, is passing by and leaves a trunk in Pandora’s care for the night and she chooses to open it, thus releasing disease, sorrows, vices and crime upon the Earth!  Though she also releases the tiny figure of Hope, who will aide the struggling humanity nd point to a happier future eventually.  The second issue ends with Herakles killing the mountain vulture and freeing the long suffering Prometheus.

Issue three is up next, so here is the cover to that issue: 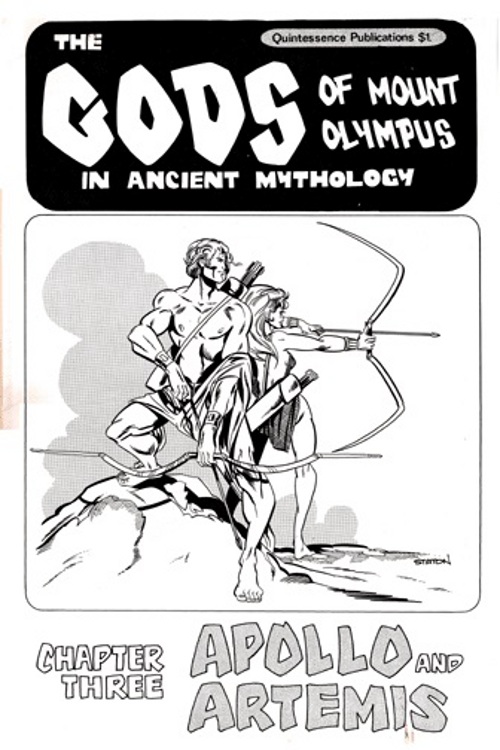 The Gods of Mount Olympus # 3

This issue is entitled; “Chapter Three: Apollo And Artemis” and it opens with the storyteller telling the story of Apollo and his sister, Artemis.  He starts with their childhood and through their adulthood.  In addition to their story, the story of Orion, son of Poseidon and Euryale, and Artemis is translated, as well.  This story does not end well, as Orion is killed and claimed by Hades in the usual God’s wrathful ways.  The problem with this issue, again in my opinion, is that the art is not quite up the par with the first two issues.  It’s possible that Staton was rushed, or knew that the series was ending, so he didn’t give it his all.  The art is still well done, but the rendering seems more simple and is missing a lot of background detail that is there in the first issues.

As an aside, I was so taken with the work that I wrote a fan letter praising the issues to Quintessence Publications and though they did not print letters, they quoted my letter in a future advertisement that ran through The Buyers Guide for Comic Fandom.  And there my name and comment was immediately below a comment from Jim Steranko!  Wow, it was like I was someone famous in the comic book world, rather than just some college kid in Michigan who liked the series.  Unfortunately I now longer have the issue of the Guide that it was published in.  I know, I save everything, how could I let that go.  Well, stupidly, in one of my moves, I tossed all my old Buyer’s Guides.  I still think that was totally out of character, but never the less, I did so.  Hmmmn, or maybe it wasn’t me, but my wife, who did the dastardly deed those many years ago.  Yeah, that’s gonna be my new story and I’m gonna stick to it from no on in!

Thanks for stopping by for this week’s Fabulous Find and be sure to come back next week for a new RETRO REVIEW.  Be seeing you …