1 out of 5 – Would Recommend: Hansel & Gretel: Witch Hunters 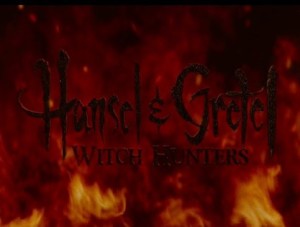 Welcome back to 1 out of 5 – Would Recommend, where Hollywood occasionally gets one right! Today, we’re talking about the first time Jeremy Renner teamed up with a witch, 2013’s Hansel & Gretel: Witch Hunters! 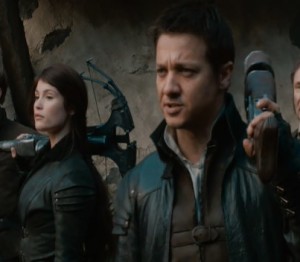 Jeremy Renner, doing his level best not to look 15 years older than his co-star.

Hansel (Jeremy Renner) and Gretel (Gemma Atherton) survive their childhood encounter with a witch in a candy house and grow up to become stone cold badass Witch Hunters! After years of making their living as Middle Ages-era Blade knock-offs, they finally meet their match in the form of a Grand Black Witch (X-Men‘s Famke Janssen) bringing together her sisters for a dark purpose on the blood moon. Can they beat an army of witches? Is this an American action flick?

Well, it was produced by (among others) Will Ferrell and Adam McKay and it was written/directed by Tommy Wirkola – the guy behind Norwegian zombie nazi splatter fest Dead Snow . So it has a solid comedic pedigree, but the true success of the flick is that it plays its ridiculous premise dead straight. It is glorious. 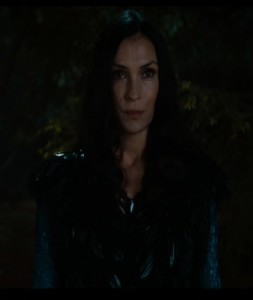 The closest we’ll get to an X-Men/Avengers movie crossover.

Like a Sharknado or an Avengers Grimm, this movie has a flatly ridiculous premise, a setting with little or no mind paid to verisimilitude, and could easily have been terrible. Only it ended up, somehow, at Paramount Pictures. It has a real budget, a great cast, good special effects, it’s like someone took one of The Asylum’s movie scripts and said “Hey, let’s do this well”. It is a giant load of pure of fun and it is HIGHLY recommended.

“The Curse of Hunger for Crawling Things. I f**king hate that one.”

NEXT WEEK: We’ll try to convince you that the legendarily bad video game adaption Street Fighter (1994) is actually a work of comedic brilliance on par with Batman: The Movie (1966).