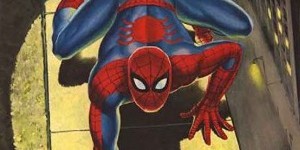 Time for a new RETRO REVIEW, and this week it’s The Spectacular Spider-Man # 1, from Marvel Comics, cover dated July 1968.  This is the black and white magazine issue that sold for 35 cents back in 1968, when regular comic books were still 12 cents a piece.  This is the only issue of this magazine series that was published in black and white. The second and final issue was cover dated November 1968, and was printed in color.  But we’ll save that issue for a future RETRO REVIEW, if you don’t mind.

So what’s up with this issue?  Well, it has a nice painted cover by a gentlemen by the name of Harry Rosenbaum, based on a John Romita Sr. drawing.  As far as I can tell, this was the only work he did for Marvel Comics.  But he did a nice iconic take on Spider-Man for his cover.  Take a look: 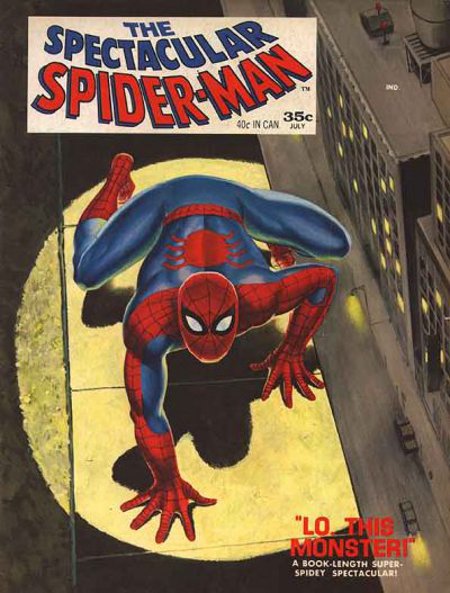 There are two stories in the magazine.  The first is entitled; “Lo, This Monster!” and it is written by none other than, Stan Lee, himself.  The is done by John Romita Sr., who provides layouts and loose pencils.  Jim Mooney then completes the art and supplies the inks.  It is my understanding that Romita then provided some alterations to the art prior to it seeing publication.  Of some note, is that this story was re-printed in the regular color Amazing Spider-Man monthly comic, in issues #s 116 – 118, but with heavy re-editing and re-drawing for those comics.

The mag opens with Spidey clinging to the side of a building, watching two men put up an election poster for Richard Raleigh, a candidate for Mayor of New York City.  Here’s that splash page for your edification: 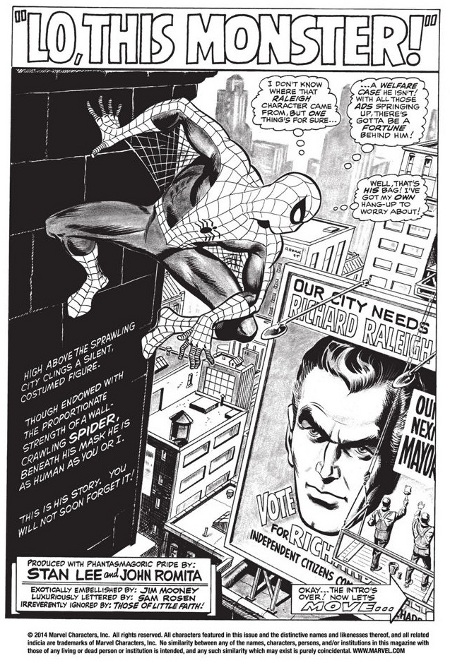 As Spidey swings off a large fist bursts through the poster from within the building.  ANd here’s page two of the story: 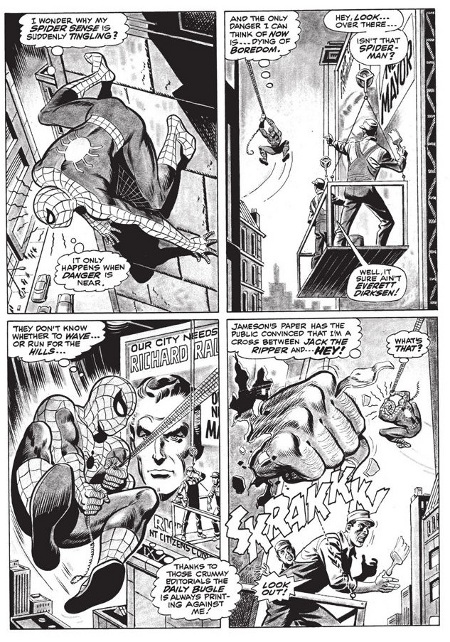 From within the side of the building strides a man-monster, over ten feet tall, if we can believe Spidey, as you can see from his thought balloon on page three.  And just because I can, I’ll show you page three: 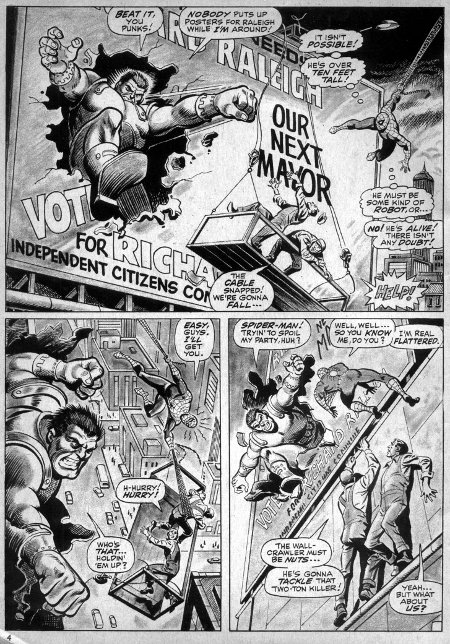 Beginning on page four, Spidey and the mon-monster fight to a standstill for the next four pages.  Interestingly Spider-Man must save the billboard/poster hangers not once but twice within the eight pages.  And as he saves them from falling the second time, the man-monster makes his escape.

Then some background and the introduction of Spidey’s cast members, as Spidey changes back into his Peter Parker identity and encounters Harry Osborn and Mary Jane Parker who are out campaigning for Raleigh.  Peter then drops into to see J Jonah Jameson, as well as,Robbie Robertson and Betty Brant at the Daily Bugle.

Lee then jumps to Raleigh who is filming a television interview and he reveals that Raliegh might just not be the upright citizen that he seems to be, as he rants off camera about it is he, who is the power!  Back to Spider-Man, as Spidey swings across the city, then changes back to Peter, so that he can pick up Gwen Stacy for a date.  He’s escorting her to a Raleigh fundraiser and dance.

While there the ceiling begins to collapse, and Peter needs to secretly prevent the accident, so he douses the lights and saves the day without switching into his Spider-Man togs. He does so and still manages to protect his secret identity.

Lee then switches back to Raleigh, who the reader discovers had planned the accident, so that it would look like the underworld would stop at nothing to stop his mayoral bid.  He then enters his basement through a secret panel in his library and the reader finds a scientist working on the man-monster.  Raleigh has been using him to destroy his own billboards making it look like crooks want to stop his campaign.

Lee then shows Jameson and Captain Stacy (Gwen’s father) talking and Jameson trying to sway Stacy to vote for Raleigh.  Stacy warns JJ that all may not be as it seems and that he has gathered information on Raleigh.  Spider-Man stops a robbery attempt at another Raleigh fundraiser and Jameson interviews Raleigh for the Bugle and lets slip that Captain Stacy has been investigating Raleigh.

At one point in the battle the man-monster reacts to a Raleigh poster and Spidey puts two and two together and decides to lead the man-monster to Raleigh’s town house.  He Spidey knows where Raleigh lives is never explained, by the way.  Raleigh reveals his true self but burns out the control devise he uses to control the man-monster.  The man-monster turns and crushes Raleigh, and his scientist creator, before collapsing dead himself.  Quite a body count for a Spider-Man story, where the bad guys are usually captured and don’t send up dead.  But the magazine format may have allowed for this resolution, where the comic book couldn’t, due to the comics code.

If you note, nowhere on the cover was the comic code seal displayed.  But it was on the cover of issue number two, four months later.  But that issue was in color, so I wonder if the code controlled color comics, but not black and white magazines, and since the second issue was printed in color it fell within the jurisdiction of the code?  Anyone know?

Of course, J. Jonah Jameson sees what he wants to see and declares Raleigh a martyr and Spider-Man the villain in the adventure.  So things pretty much remain the same!

The second story in the mag is a re-telling of Spider-Man’s origin story in ten pages, entitled; “In The Beginning”.  It is written by Stan Lee and drawn by his brother, Larry Lieber, with the inks provided by Bill Everett.   I will say that Lieber’s art never looked better than here, under Everett’s brush work.

I definitely think this issue is worth adding to you collection and recommend it to you, even though you’ll have to pay more than the 35 cents it cost in 1968, today.

Which brings us to a close of another RETRO REVIEW, but please return here next week for a new Fabulous Find.  Be seeing you …