Fabulous Find: The Other Half – Girl With the Long Black Hair 45 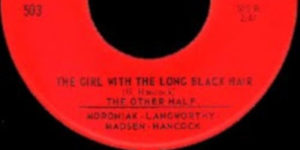 Time for another musical Fabulous Find, so this week I’m presenting to you; The Girl With The Long Black Hair by The Other Half. There were a number of bands across the country named The Other Half, but this one hailed from Chicago, Illinois. They originally were known as The UFO’s when they first came together and formed the band but later changed their name to The Other Half.

This Northwest Chicago band was formed in 1965 and initially was made up of Steve Moroniak, the lead guitarist, Fred Langworthy, the rhythm guitarist, and finally drummer, George Hancock. Eventually, a bassist was added to their line-up as well. His name was, Greg Madsen. The band could frequently be found playing at private parties, playing at clubs, or playing at school dances. They made two local television appearances and they also won a local talent show.

The Girl With The Long Black Hair’s lyrics were written by the group’s drummer, George Hancock, and the song was recorded by the band during June of 1967. The song was recorded at Chicago’s Recordings Unlimited.   It was not even a commercial release, but more of a promotional single. George sang the lead and the entire group added harmony vocals in unison after the music and lead vocals were recorded. Apparently, The band had only three-hundred copies pressed. But the song still lives on today on the few remaining copies in existence and on various garage band compilation albums like Nuggets.

So that’s s little of the background on the band and the song, now the good part, you get to listen to it. From YouTube, here is The Other Half’s The Girl With The Long Black Hair: