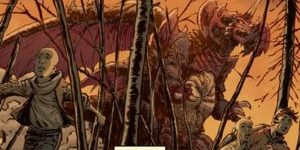 Welcome back to Strange Times & Places, where I’ve obviously been in something of a Godzilla mood of late. As a result, we’re looking at the IDW mini-series Godzilla: Cataclysm.

It’s an Imaginary Story, in as much as there is any definitive Godzilla canon. It depicts a world where a catastrophic global war between the kaiju broke out twenty years ago and humanity is stuck living in the ruins of their once-great cities.

Hiroshi is an old man living with his adult grandson in a small human village amidst the ruins of Tokyo. In the decades since the kaiju destroyed the world, they’ve become the objects of worship…but Hiroshi prays every day that they never return. His prayers prove futile when the growth of Biollante near the settlement draws Godzilla back to the area, and he brings his enemies and allies alike back with him…