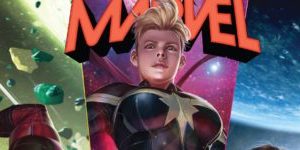 Welcome back to Strange Times & Places, where I’m repeating myself two weeks in a row because I straight up forgot that I was sitting on Infinity Countdown: Captain Marvel, waiting for the movie to come out.

It’s a series of For Want of Nail universes that Captain Marvel visits using the Reality Stone, questioning her life decisions up to that point.

I just described it. Individual universes are dealt with below.

Come Back Next Week for Your Regularly Scheduled Tokusatsu Gesundheit!