Nobody Loves The Hulk Record

Welcome back to Fabulous Finds # 2!  This week I want to talk about a 45 RPM record I recently purchased via eBay.  It’s entitled; Nobody Loves The Hulk! and is done by The Traits!  There is not a lot of information, that I can find, about the group; The Traits or this record.  As everyone knows, The Hulk was created by Stan Lee and Jack Kirby.   The record itself is listed as copyrighted by the Marvel Comics Group!  It was released as a single,  also called a “45”, in 1969 and may have been strictly a promotional item, since the copyright is held by Marvel Comics.  The record features a picture sleeve of The Hulk and the reverse side also provides has the lyrics!  Here’s a look at the picture sleeve! 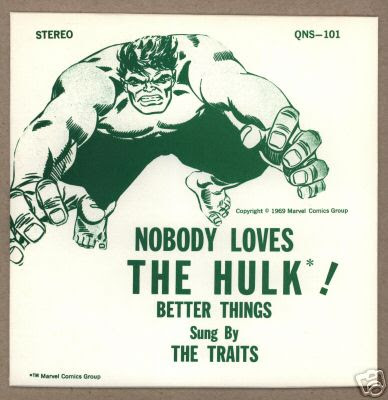 The song gives the listener a version of the Hulk’s origin story.  Dr. Bruce Banner, testing his new gamma bomb, saves the life of Rick Jones, a teenager who has wandered into the test area, but is himself exposed to the blast: “Well he saved the boy/But at what a change/The explosion made him feel so strange/For his molecules had been rearranged/Into the Hulk! The Hulk!”   The song continues; “Whenever people see him/All they do is run around and scream, cause/Nobody loves the Hulk!”  And I love the line at the end of the chorus; “We don’t allow no green skin people in here!” 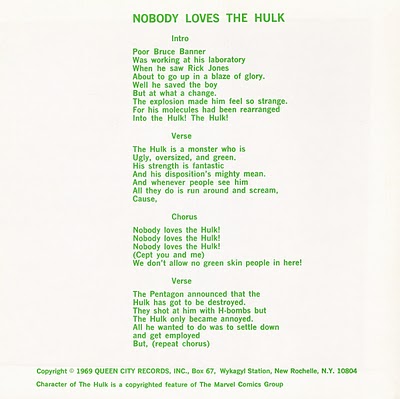 Nobody Loves The Hulk Back

The song falls into the 1960’s garage rock genre and I think it’s pretty darn good!  The song was even included on the 1987 Pebbles; Volume 21, release on vinyl and compact disc (cd) from AIP Records!  As I mentioned above I purchased it on eBay from someone, who obviously bought out a warehouse cache of these records, so if you keep an eye out, you too can likely purchase a copy for your record collection.  I’m not sure if many were sold back in the early 1970’s, but they were advertised in Marvel Comics, if ever so briefly.  Check out the ad that ran in the comics: 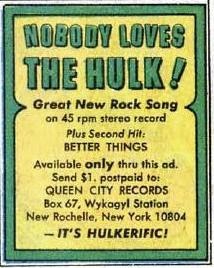 And as a special treat, here’s a link to YouTube, so you can give it a listen!

I hope you enjoy the song and this edition of Greg Turner’s Fabulous Finds!