My Golden Age #5: In Which Our Hero Discovers Freedom

The winter of 1994 was when I discovered my first taste of freedom. Every Wednesday, since getting into comics the year previously, my mother was dealt the thankless task of picking my friend Chris and I up from school. Like the saint that she was, she would then take us to our local comic shop (shout out to Card-Omics in Plymouth, heyyyy!) For some reason or other, perhaps being busy with my older siblings, one particularly cold Wednesday, she didn’t have time to swing by the store. This is the moment in a young comic fans life when devastation sets in. What would I do without my new comics on a cold Wednesday night? Undeterred by my inability to drive, or  my inexperience at hot wiring cars at the age of 14, I went with the only option I had. My bike.

I pedaled the few miles from my house to the shop, my Sony discman skipping like crazy (I didn’t come from money folks, I couldn’t afford your fancy pants skip protection discmans, I was old school!) and I made it to the shop, just in time to grab a copy of one of the nearest and dearest comics to my heart, Wolverine #90.

What’s that you say? There’s nothing special about Wolverine #90?

The issue was written by Larry Hama, with art by Adam Kubert. It was the final “regular” issue before the “Age of Apocalypse” storyline took over the books for the following four months.

Being that there was no such thing as the Internet to blow all future storylines for me, at the time, I was under the impression that this was it. This was the end of the X-Men in the marvel Universe and they would permanently be replaced by their AoA counterparts. Ah, to be that young again, to just believe and not be jaded by years of rebirths, reboots and resurrections.

I pedaled home as fast as I could, flopped down in front of the fire place in our living room and poured over every page of that book. The gimmick of the book was that the fight between Wolverine and Sabretooth was so viscous and brutal that normal page format couldn’t contain it, so the book had multiple gatefold pages and pages that you’d have turn sideways, and so on, with some of the best art I’ve ever seen come from Adam Kubert. I’m sure the jaded fan in you is thinking “gatefold pages, having to flip the book around to read it, uggh”. Well forget that, if you get a chance to grab this book in the back issue bins of your local shop, do it. It’s just fun comics. It’s the fight you’ve always wanted to see between Wolverine and Sabretooth. The best part, it has a finale, there is a winner at the end of the issue, and it’s glorious. 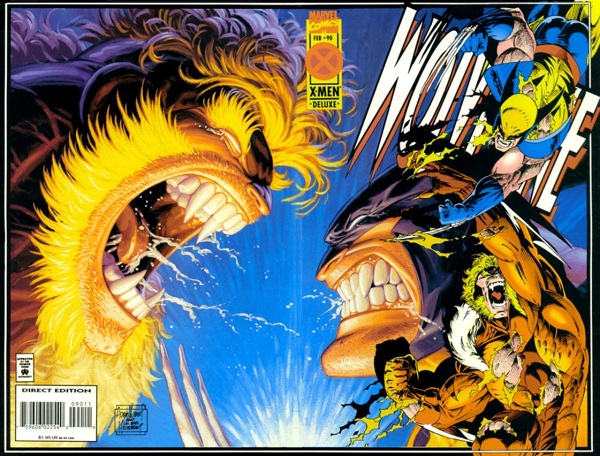 Now, while this issue was great, and is still a re-read for me all these years later, the thing that it cemented in me was my love for the innocence I had then. The youthful exuberance and excitement of riding my bike up to the store, in anticipation of what would be waiting there for me (again, I was young, I paid no attention to shipping lists, nor did I have a pull yet. I was just grabbing whatever caught my eye off the rack) and then the trek home pedaling as fast as my feet could take me so that I could dive in as soon as I got home.

As comic fans we all fall into the unfortunate category of getting slightly jaded, our ability to see a gimmick or a sales pitch from a mile away is more defined. I fight this as best as I can. How do I do this? For one thing, I still, to this very day, ride my bike to the shop, on Wednesdays. As adults our lives get faster, we’ve got jobs, some have kids, we’ve got responsibilities that start to take up our time. Getting our comics has slowly become just another chore, a stop on our way home from work, or the thing I have to do between getting groceries and swinging by the bank. When I realized that it was just becoming another thing to do, and not something I enjoyed and looked forward to, I switched it up.

Now, I ride my bike up to the shop with the same anticipation that I had when I was 14. I pedal just a little faster on my way home because I’m excited to read. I’ve stopped reading previews of books, or paying that much attention to the goings on of the industry, I’m reclaiming my love for comics and not allowing the cynicism of growing older and seeing gimmicks rehashed affect something that I love this much, I love gatefold covers, I love foil covers, variants, character deaths and resurrections, alternate timelines, clones, crossovers, events, whatever, it’s comics. It’s fun to slow down and enjoy the ride.