Hi, Greg Turner here, with Back To The Past Pop Culture TV, and I’d like to talk to you about those, by gone days, when the only thing featuring Marvel super-heroes were the comic books themselves.  Or at least that was so until 1966 and 1967, when Lancer Books published six “Collector’s Albums”, reprinting some Marvel Comics in paperback book form.  There were a total of six books, two reprinting early stories from the Fantastic Four and one each reprinting tales of Spider-Man, the Hulk, Thor and believe it or not, Daredevil.  Needless to say these black and white reprints left a lot to be desired, but did feature our beloved heroes in something other than comic book form, so that was way cool.  Here’s what those books look like: 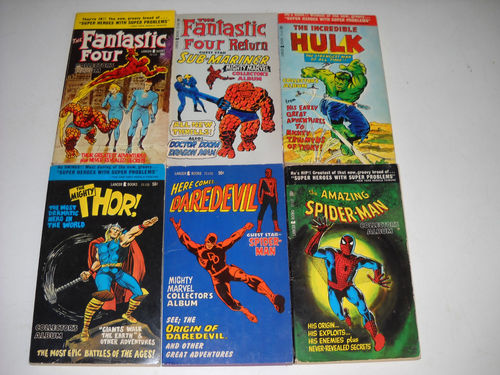 Then in 1967, maybe piggybacking on the “Batmania” television craze, Marvel went to the next level. With the publisher, Bantam Books, who had been specializing in superhero pulp reprint fiction since 1964, when they began reprinting the 1930’s pulp novels, featuring Doc Savage, Marvel commissioned two all new prose novels starring their costumed heroes!

The first of these novels was based on the colorful team of adventurers, The Avengers and published in June of 1967.  Maybe this was also a way to protect their trademark in all arenas, as the British TV series, The Avengers, was currently showing on television in the United States to great success.

Whatever the reason, The Avengers Battle the Earth Wrecker launched with little to no fanfare.  Heck, I don’t even remember it being touted in the comic book themselves.  But writer Otto Binder wrote a pretty good story, told in the grand pulp style.

The heroic team, consisting of Captain America, Iron Man, Hawkeye, Goliath and the Wasp, though Quicksilver and the Scarlet Witch were pictured on the excellent cover painted by noted paperback cover artist, Robert McGinnis, they did not appear in the book.  Her’s that cover: 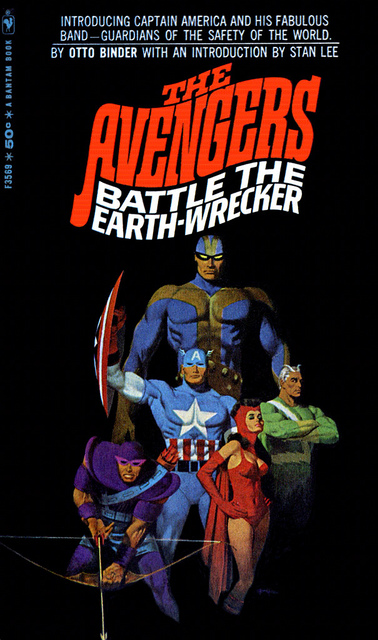 The Avengers were called upon to battle Karzz, a monstrous alien mastermind from the future.  Almost sounds like Kang, doesn’t it?  Who has travelled back from the future, to eradicate the entire Earth.  This fast paced thriller doesn’t suffer from the lack of pictures.  Karzz is armed with fearsome future weapons, so how can the Avengers stand a chance against him?  Well, since they are Earth’s mightiest heroes, yes they can, and they do!  The Avengers overcome the alien from the future with their might and teamwork!  Just like in the 2012 Avengers movie, with a shout of Avengers Assemble they work together to get the job done!

The follow-up novel, published in July of 1968 is written by noted science-fiction author, Ted White.  The second prose novel features Captain America and is entitled; The Great Gold Steal.  It also features a very nice cover, painted by Peter Caras.  It’s written in an old pulp style, as well and concerns the efforts of a criminal group with plans to loot the Federal Reserve Bank of New York and Cap’s battle to stop them before they can bring America’s economy crashing down.  Heck that’s a story that is still timely today!  Here’s a look at that cover: 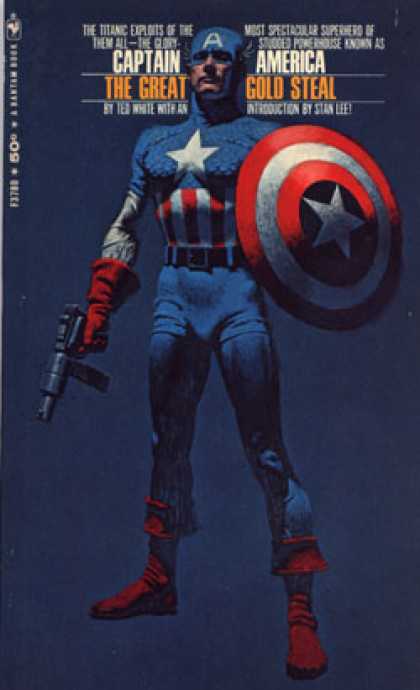 White’s writing is very deadpan and understated and he makes good use of the technique that writer, Ian Fleming, found so effective, giving brand names and specific locations.  His version of Captain America, usually called Rogers, most of the time, is serious and fallible, a very much a hero on par with an FBI field agent or top intelligence investigator.

One thing I really liked was White’s writing that Cap uses the concentric pattern on his shield to compel enemies to fire at it, instead of the man himself.  This kind of explains the reason for the circles on his shield that has never been mentioned in the comics to my knowledge.

The Great Gold Steal is in fact about a great gold steal, and the villains use bird codenames like Sparrow, Eagle, Robin and Starling.  Good thing they didn’t use Falcon, eh?  They are not very well defined, but their plan is well described and thought out.  And in fact, there is actually another villain, their leader, who shows up near the end of the book, that you all will all recognize, though I don’t want to give away any spoilers here.

These two books were/are excellent and it is a shame that no more followed.  I only guess that since they were not even advertised in the Marvel comics, that they just were overlooked by the rest of the paperback book buyers of the day and the rest of the general public!  But I’m proud to have them in my collection, and I highly recommend them to you, as well.