This week’s RETRO REVIEW looks at DC Comics’ Doom Patrol # 104, cover dated June 1966.  It features a rare wedding in a comic book, between two comic book characters.  But it didn’t make the headlines like the marriage of Reed and Sue (Storm) Richards or Peter (Spider-Man) Parker & Mary Jane Watson over at Marvel Comics or even of Barry (the Flash) Allen and Iris West, and certainly not the headline grabbing Superman/Lois Lane marriage of a few years back!

Where is the best place to buy and sell comic books near me?

This wedding is of Rita Farr and Steve Dayton.  Who are they, you might ask?  Well, being that it’s an issue of the Doom Patrol, you might have figured out that Rita is Elasti-Girl, one of the original members of the Doom Patrol and her husband is the sometimes hero; Mento!  Yeah, I know, not real big super-hero names in anyone’s book.

But with that said, it’s not a bad comic book.  First off, we get a nice cover, featuring said wedding, drawn by Bob Brown.  The cover even includes Superman, Batman and the Flash, though you need to look close, or you just might miss them!  And it has the villainess, Madame Rouge interrupting the wedding just as the minister is pronouncing them man and wife!  Even to young boys, this just might make them want to pick the book up back in 1966, when all of DC Comics were aimed at ten to twelve year old boys!  The story is entitled; “The Bride of the Doom Patrol” and is written by Arnold Drake and is drawn by Bruno Premiani. 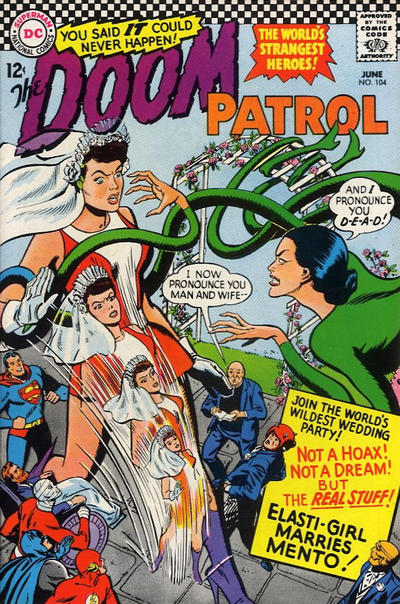 The story begins with Rita looking for another member of the Doom Patrol; Larry Trainor (Negative Man), Cliff Steele (Robotman) or even the Chief (Niles Caulder) to take her out shopping or to an art gallery, but they are all too busy.  When suddenly she is lifted up out of her seat and floated out of the mansion and across town by Mento, who is testing his new magnifying transformer to extend the limits of his powers.  Of course, the rest of the Doom Patrol follow and Robotman attacks Mento.  Rita reacts negatively (no pun intended) to their intervention, telling her teammates that who she sees is none of their business and that she’s their teammate and their slave!  She then slaps Mento when he tries to kiss her.

On the way back to their headquarters, “the boys” encounter and stop a bank robbery in a single page!  Then once Rita joins them, they all rush out to rescue some workers from a collapsed tunnel.  Using their unique powers the Doom Patrol saves the day!

Things move quickly in the Silver Age, as we then see Rita on a date with Steve and he asks her to marry him!  Rita does give him an immediate answer, but the next day Elasti-Girl saves the day in a hostage situation and Negative Man makes the comment; “Nice work, Rita! Especially for a goofy lovesick dame!”  Her reaction?  Is to accept Mento’s marriage proposal.  Of course, Larry and Cliff come up with a plan to prevent the marriage, but once it’s in place, chicken out and reveal all to Rita.  And what does she do?  Why, she calls off the wedding!

Thus ended part one of the story, and in fact, this was originally the end of the complete story.  But the powers that be at DC Comics decided to extend the story and in the second half of the story, an angry Mento “calls out” Robotman and Negative Man and defeats them, as well as, Elasti-Girl when she joins the fray.  Rita is blinded during the battle, but the Chief is able to heal her after the defeat.  It is then revealed, that Mento was actually Madame Rouge disguised as Mento acting under Monsieur Brain’s plan!  Still with me?  Madame Rouge can alter the shape of her features, and obviously other parts of her body, to make herself look like anyone (kind of what the pulp hero, The Avenger, could do, or Marvel’s Mystique, without the instant shape shifting powers).  She has also broken in and destroyed a number of Steve Dayton’s valuables, and he thinks the Doom Patrol has done this, so this sets up a battle between Mento and the Doom Patrol.

The heroes face off in desperate battle, but the Chief figures out that it is a set up, and when the villains show up to gloat, they are soundly defeated within a short two pages are and are forced to flee.  Elasti-Girl pulls Mento out of the bay, where she had tossed up and once again he asks her to marry him.  He must be a real glutton for punishment, eh?  But surprise, or maybe not, she says yes!

And so, three short hours later the wedding takes place.  Robotman gives away the bride and Superman, Batman, the Flash, as well as, Wonder Woman, three of the Teen Titans (Robin, Kid Flash and Wonder Girl) and Beast Boy are at the wedding to celebrate!  And do they go off on a well-deserved honeymoon?  Nope, the Doom Patrol is called into action and Rita rushes off to join her teammates, leaving her new husband standing alone thinking that he can’t stand his new “freak brothers-in-law!”

All in all a pretty fun little comic book!  Don’t own the original?  Hard to Find?  Well you can also find this story reprinted in The Doom Patrol Archives # 3 from 2002.  The series is a little offbeat, especially for DC Comics, but it is one of my favorite series from that company and I highly recommend that you give the Silver Age’s World’s Strangest Heroes a try; I don’t think you’ll be disappointed. 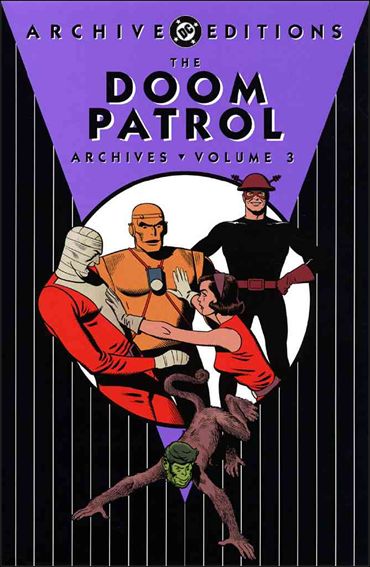