Welcome back to another Fabulous Find brought to you by Greg Turner!  This week I’ve dug deep into my collection of cool things and dug out some H-O scale micro super-heroes based on the Marvel Comics characters!  And what the heck am I talking about you ask?  Well, hang on, and I’ll tell and show you!

Way back in the 1970 & 80s, I used to subscribe the The Buyer’s Guide for Comic Fandom, a great newspaper fanzine/adzine kinda thing.  It came out weekly, and any comic book fan, worth their salt, could find out everything that was going on in the comic book world and also buy back issues and other collectible things from people advertising in the Buyer’s Guide.  I was a subscriber from about issue 32, and subscribed for many a year, and hundreds of issues.  One of my greatest regrets was tossing them in my last move, or was it the move before that.  I’m not really sure, but those hundreds of issues took up a ton of room, that I decided I needed for other collectibles, I guess!  I’m the kinda guy that saves everything, so I really don’t understand how I could have just thrown them away!  I really don’t remember doing so, but maybe I’ve just blocked it from my memory!

But that’s not what I’m here to talk about, so consider that last paragraph as setting the scene.  So there I was sometime around 1984 or 1985, and I come across an ad in the Buyer’s Guide from a guy by the name of Dan McIntyre, who lived in Philadelphia, Pennsylvania.  His ad was titled; Super-Hero Statue Sets, and how do I remember that, I don’t!  But, I do still have a copy of the ad!  (See, I told you I save everything!)  The ad went on to say; ” Check out our new permanent low prices and order now for the holidays.  Our finely detailed HO Scale sets make great gifts for all ages.”  Then it proceeded to list the Super-Hero sets for sale and the prices of each set.

You could order the four Fantastic Four characters, the Avengers, The Doom Patrol, Teen Titans, the Batman family, the Superman family, the New Mutants, the New X-Men, heck you could even order the original X-Men!  Other sets included; The Challengers of the Unknown, Green Lantern family, Wonder Woman family, even Spider-Man, Batman and Superman villains!  And the most expensive sets were of the Legion of Substitute Super-Heroes, the Justice League of America, the Justice Society of America and finally The Legion of Super-Heroes (containing 34 figures wearing their old or their new costumes, your choice) or the Legion of Super-Heroes (containing 52 figures with the old and new costumes both!)

I ended up ordering three sets, The Fantastic Four (obviously four figures), The Avengers (six figures) and a Marvel Heroes set (four Figures).  You can do the math to figure out what I spent, if you really want to know. 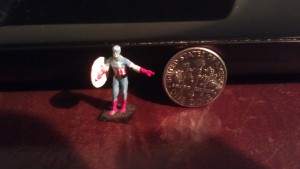 So what do these things look like?  Well, here’s a few pictures.  I’ve shown them as they came in the individual sets and I’ve pictured one along side a dime so that you can see the relative size of the characters/figures/statues! 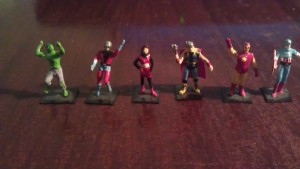 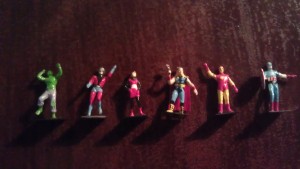 I still think they are totally cool and really wish that I would have ordered some of the DC figures, or at least the X-Men set and a Spider-Man family set.

But since I’ve never been independently wealthy, I just could justify spending more money than I did at that time.  And likely the ad stopped appearing in the Buyer’s Guide and out of sight, out of mind! 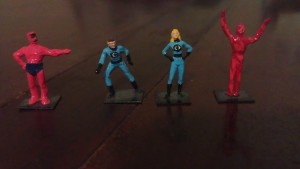 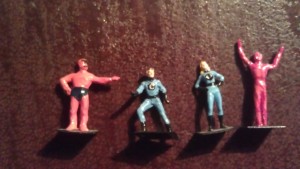 Needless to say, I enjoy searching through my collection of comic book related things, and I like sharing them with you here, but some feedback would be greatly appreciated and would keep me inspired to keeping the search going and the posts coming.  So leave me a comment, or respond on Facebook or via Twitter, so I know you’re out there! 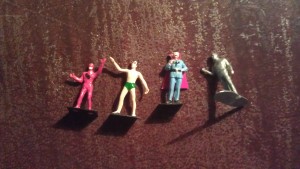 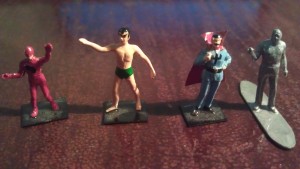