Happy Friday!  And welcome back to another RETRO REVIEW!  This week I’m going a little outside the box and bringing to your attention the first issue of Chili from Marvel Comics, cover dated May 1969.  And just who the heck is Chili, you ask?  Well she’s been Millie the Model‘s friend, rival and fellow model since 1947!  Now there’s a lasting friendship, if there ever was one!  Here’s the cover to her first issue. 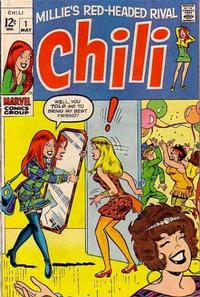 But as I said above, Chili has been in comics for twenty-two years before receiving her own comic book title.  She first appeared in Millie the Model # 5, way back in 1947.  Chili was established in the early Millie titles as her rival, and as generally having less morals.  Plus possessing other negative traits, such as being egotistical, vain and self-serving. These traits strained her relations with her co-workers, as well as, Millie. Chili was featured throughout the Millie the Model series, and provided one of the main sources of comedy, with her dry comebacks. On occasion she and Millie would be portrayed as friends, b ut generally only when the plot called for it.  Otherwise they were “bitter” rivals!  Here’s a look at the cover of her first appearance. 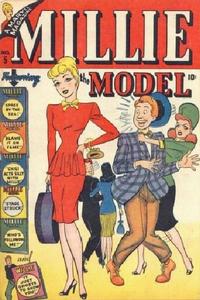 Interestingly enough both Millie the Model’s long running series (207 issues) and Chili’s much shorter run (26 issues and an annual) ended in the same year, 1973!  Though that didn’t totally end the models’ history at Marvel Comics, as these characters appeared in recent years in the mini-series; Models Inc. where they are established as friends and co-workers of Patsy Walker and Mary Jane Watson.  Hey, you know Marvel, they never forget about any of their characters for too long!

But back to the fist issue.  The cover was drawn by Stan Goldberg and features a gag where Chili brings a mirror to a party and tells Millie at the door; “Well, you told me to bring my best friend!”  Only a model, eh?  The book itself features five short stories, a fashion page and a one page short gag strip featuring Chili.  The stories are all only three to five pages and each one is written by Stan Lee and drawn by Stan Goldberg.  Goldberg’s style is very similar to Dan DeCarlo‘s style, who Goldberg followed on the Millie the Model strip beginning in 1959.

The best two stories are the lead story; “The Lady And The Lipstick!”, where Chili is selected to be the new Lily Lovey Lipstick Girl and what happens when she rushes out to purchase some of that lipstick and runs into Lily Lovey herself, and the last story; ” The Party Smarty!” where Millie is inviting everyone to a party, but goes out of her way, to not invite Chili.  So Chili gets mad and goes around telling everyone that Millie has had to cancel the party.  Only to have Millie show up at her house that night for a surprise party for Chili and no guest are there to party, except for a very surprised and horrified Chili!

I know it’s not my usual super-hero fare, but still these are very long-time Marvel characters, who I think deserve mention here in a RETRO REVIEW!  Hope you enjoyed it!  Be seeing you …