Welcome to another edition of Fabulous Finds!  Okay, so you might be asking, just why am I writing about a pop record from June/July 1965?  Well, I could answer; because I love music almost as much as I love comics, or maybe even more!  If there was any interest, I’d do a music column, sharing my vast 45 collection, here each week, but I suspect that most of you wouldn’t be that interested in such a column.  Too bad, as I would certainly enjoy doing it!

So, I wrote in an earlier Fabulous Find, about the Hulk 45, I found on eBay, which definitely tied into comics, and this week, I’m sharing a 45, I recently picked up at a local record show.  I was rushing through a large group of 45s, marked three bucks each, that were in no order, or at least no order that I could figure out.  I was rushing so that I wouldn’t hold up some friends (Hi Scott & Megan!) who were waiting on me to finish so we could go do lunch!

And what should I come across but the Tom Jones 45; What’s New Pussycat?.  Was it a record I was looking for?  Not particularly, but it was one that ended up reaching number 3 on the Top 40 pop charts in July 1965.  But what drew my eye was the picture sleeve that the record was in.  Here, take a look: 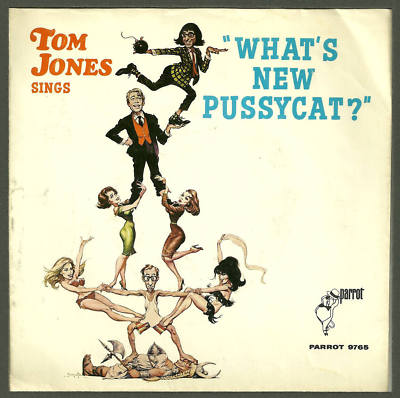 It is on the Parrot label, number 9765, if any of you care about this (Well, I do!), but most importantly it had artwork drawn by, none other than Frank Frazetta!  Yes, that’s right, the master of fantasy artwork himself, Frank Frazetta!  I own a couple of album covers that sport Frank Frazetta artwork, but I was totally unaware that he had done this picture sleeve for this 45.  In fact, until I laid my eyes on it, I wasn’t even aware that this 45 had a picture sleeve!  But that’s not uncommon, as sometimes singles were issued in plain company sleeves and sometimes in picture sleeves without any rhyme or reason!  Sometimes the picture sleeves were only relesased in certain parts of the country, as well.

Well, let me tell you, I snatched this bad boy up in a heartbeat!  Not only does it have a great picture sleeve, by a well known, talented, and very collectable artist, it’s a pretty good song too!  Say what you will about Tom Jones, but he had a pretty smooth voice that drove the members of the female sex pretty wild, back in the day!

Researching further, Frank Frazetta did the the artwork for the movie poster, his first, but not his last, foray into Hollywood poster artwork, this was for the United Artist Film starring; Peter Sellers, Peter O’Toole, Romy Schneider, Paula Prentiss, Woody Allen and Ursula Andress, Waht’s New Pussycat?  If you look closely at the artwork for the picture sleeve above, and the movie poster below, you can see Frank Frazetta does a wonderful job of capturing the likenesses of the individual actors and actresses!  Here is the movie poster: 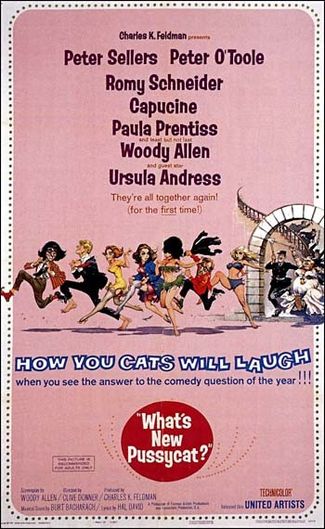 Here is a detail of Frazetta’s work from the above poster, so that you can enjoy the artwork better: 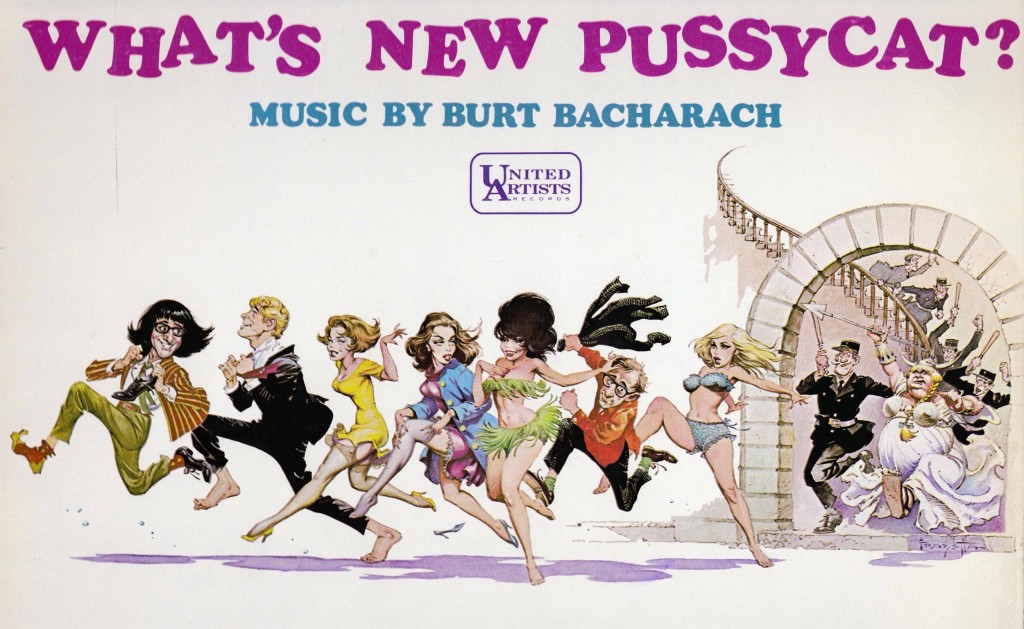 Lastly, here’s a YouTube video so that you can enjoy this Top 10 hit for yourself.  So sit back, enjoy the lovely Frank Frazetta art and the dulcet tones on Tom Jone’s singing; What’s New Pussycat from 1965!