Welcome back to another Fabulous Find!  This week I’ve brought to the light of day, The Shadow Secret Society Membership Kit.  And just what is the Shadow Secret Society, you ask?  Well it’s a club started by Jim Steranko and his Supergraphics Publications. The very first mention of this club was a two page poster/center spread in the Steranko fanzine; Mediascene # 14.  Here’s that poster: 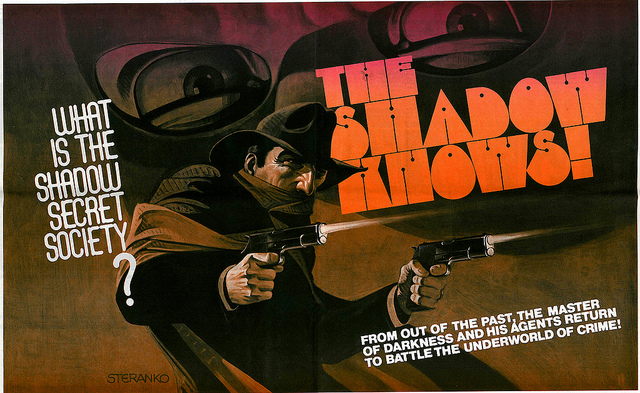 Eye catching and pretty cool, if you ask me!  That certainly got my attention, but what exactly was this Shadow Secret Society?  Well, turning to the last page of this issue, I found out that “The Shadow knows that thousands of readers have been clamoring to learn more about his fantastic adventures, and he’s doing something about it!  The Shadow is rallying all those who’ve thrilled to his exploits over the years to reveal a top priority organization called The Shadow Secret Society.”  “For the first time in over 25 years, the Master of Darkness is opening the rolls so that YOU can become a trusted agent in hi cause of justice and honor.”

And for only $2.00, plus 50 cents postage and handling a special membership kit would be shipped to me!  Upon joining I’d receive, a unique midnight black identification card, bearing the Shadow’s likeness on one side and my own individual registration number on the other!  Here’s a look at both sides of my card: 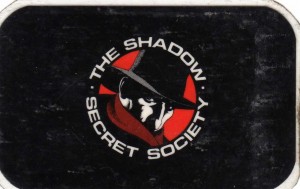 And here’s the reverse side, including my unique individual registration number (mine being # 220): 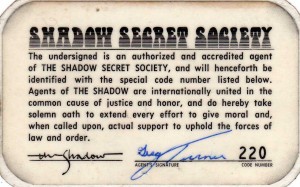 Besides the midnight black identification card, the membership kit also included a Shadow Secret Society Bulletin.  It’s four pages covers topics like; the membership kit itself, local Shadow clubs, the 1975 Comic Art Convention held at the Hotel Commodore, in New York City, where Walter (Maxwell Grant) Gibson was to make an appearance to commemorate the Shadow’s recent revival.  The bulletin also goes into the secrets of the Shadow’s fire opal ring, as well as, a preview of the Pyramid Paperback Books,featuring covers painted by none other than, Jim Steranko!  Here’s a peek at the first page of said bulletin: 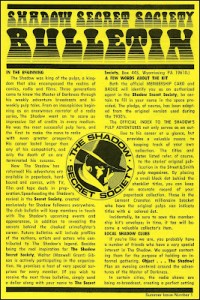 Next up in the membership kit is The Official Index to The Shadow Pulp Adventures, compiled from the original Street & Smith pulp magazines.  I’ve used this over the years to keep track of the various Shadow novels I’ve purchased in pulp, paperback and hardcover books, and now in the Shadow Doubles that can be ordered through Previews each and every month!  Here’s that handy index cover: 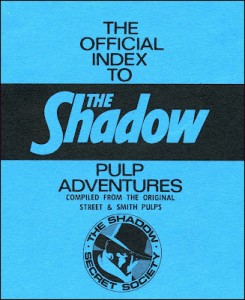 The Official Index To The Shadow Pulp Adventures

The last and final thing included in the membership kit was a Secret Society Badge, a pin back, or a button, whatever you choose to call it, but you could pin it to your shirt or jacket and proudly proclaim for all the world to see that you proud member of the Shadow Secret Society!  But if you wore it for everyone to see, then how could it be s secret society?  Oh well, I guess back in 1975, things like that didn’t matter so much!  Here’s the button: 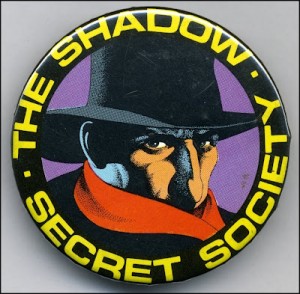 And that’s what you got for your two bucks, plus 50 cents postage!  Oh, one more thing, the membership kit came in an illustrated envelope with some pretty sweet Jim Steranko artwork on the outside!  It was sent to me via Third Class an cost a whopping 10 cents to mail to me, but I’m sure the envelope ate up the remaining 40 cents of my postage and handling fee!  Here’s the envelope sans my former address: 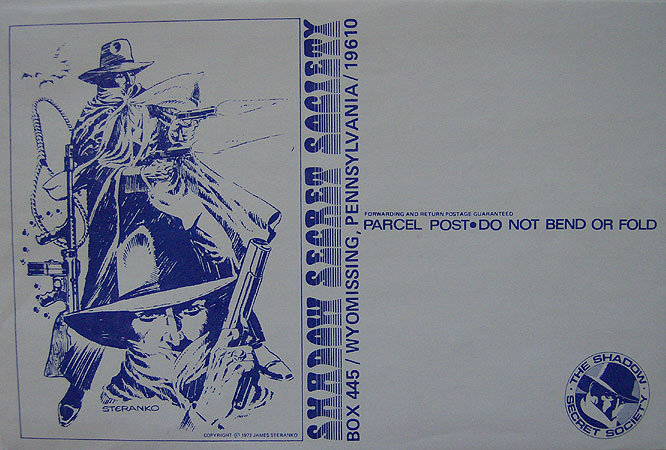 I do want to say that I never received a second bulletin and do not know if a second one was ever published.  If anyone out there knows, please let me know in the comments section, as I’d love to know if there was ever anything else sent out besides this initial membership kit.

There was also a Doc Savage club advertised in the same issue of Mediascene (number 14), and in following issues of Mediascene, as well.  I, of course, joined that too, it was called The Brotherhood of Bronze, and if you’d like to see the materials in that membership kit, please let me know, or if not, let me know that too!  But I had a lot of fun scanning and writing about The Shadow Secret Society, so the odds are that I’ll be back in a later Fabulous Finds with the Brotherhood of Bronze kit, as well.

And the fact that these membership kits were not available in stores, or shops, anywhere, ensured the relative scarcity of these materials.  I wonder just how many members were in the Shadow Secret Society?  If they started with number one, there were at least 220 members, as my number, as you saw above was number 220!  Any of my readers fellow Secret Society members?  I’d love to hear from any other members still out there!