This week I’ve decided to write about the fanzine, The Heroine Addict.  This fine fanzine, dedicated to Super-Heroines, was published beginning in September 1974, and ran till it’s final issue, #11, in the summer of 1977.  Actually it then became Heroines Showcase, but I’ll leave those issues for another edition of Fabulous Finds!  That version of the fanzine continued with the numbering that Addict had finished with, therefore the first issue of Showcase was #12 and lasted until #19, I believe.  I am still looking for issues 15 and 17 to complete my collection.

The Heroine Addict was the published fanzine of the Comics Heroines Fan Club, a division of the Adventure Heroines Publishing Association and was the brainchild of the publishing editor, Albert Tanner of Baltimore, Maryland.  As Albert wrote in his editorial in the first issue, “our purpose is not to produce ‘just another comics fanzine.’  They already exist in abundance; we have something different in mind: the publication of the nation’s only regularly issued fanzine devoted entirely to readers, writers and artists interested in comics heroines and their counterparts in other media.”  And he and his department editors succeeded admirably!  They produced a fanzine featuring articles and art dealing with comic book, television, and movie heroines, and for the first eight issues, on a bi-monthly schedule.  With issue #9, they went to a quarterly schedule and the last issue, #11, under a new editor, Steven Johnson, a year after issue #10 was published.  But though it took a full year to be published, Steven upgraded the fanzine from a newsprint zine to a slick, high quality paper stock. 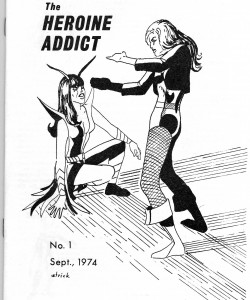 Issue #2 kicked off with a wraparound cover by Ted Delorme.  Articles were supplied by Dwayne Best, Scott Gibson, Tom Luth, Legion fan; Bob Rodi, (do you see a Legion pattern developing?) Scott Taylor and Jeff Thompson.  Mercy, again, provided a Spotlight On: this time, The Avengers Gals.  Scott presented A Look at the Legionairesses and Tom O’Reilly did a two-page centerfold featuring Batgirl & Wonder Woman.  And no, not that kind of a centerfold!  Get your mind out of the gutter, people!

Issue #3 brought us another wraparound cover, this time by Mercy Van Vlack.  She continued her Spotlight On: column, this time featuring the Justice Ladies of America.  Scott Gibson wrote on the woman in Batman’s life and why they never stay around.  Dwayne Best’s Vault of Villainesses focused on Star Sapphire from the Green Lantern comics and Bob Rodi presented his take on the daughters of Vampirella (Satanna, Tigra, Lilith, Red Sonja & Shanna).

Issue #4, featured the most Super-Heroines ever drawn on a cover of a fanzine, heck, George Perez may not have ever drawn this many heroines on any of his jam-packed comic book covers!  Carol Strickland pulled out all of the stops on this one, folks!  She’s squeezed in 90, yes, count them, 90 heroines on this amazing wraparound cover done for the April 1975 issue.  Mercy provided her Spotlight On: Fantastic Femmes (featuring the woman of the Fantastic Four).  Kirk Hastings wrote the first part of a multi-part article on the Avengers Woman, but this article is on the television Avengers, i.e., Cathy Gale & Emma Peel.  Other writers represented this issue were, Valeria Beasley, Dwayne Best, Scott Gibson, Tom Luth, Bob Rodi & Jeff Thompson.  Art was provided by Ted Delorme, Kirk Hastings, Tom Luth, Joanna Moore, Tom O’Reilly, Chris Padovano, Bob Rodi, Scott Taylor, Frank Travellin, and of course, Mercy Van Vlack. 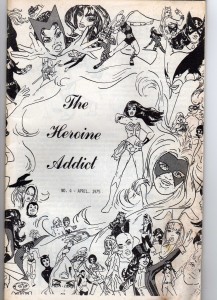 This issue also contained a book review of The Comic-Book Book, reviewed by Jeff Thompson and also Dwayne Best’s Vault of Villainesses focused on Marvel Comic’s Madame Hydra.  But it’s the cover of this fanzine that makes this issue so special, in my opinion!

Issue #5, comes in with another wraparound cover, this time drawn by Kirk Hastings featuring; Supergirl and Wonder Woman.  Kirk also supplied part 2 of his Avengers (TV version) women, within the pages of issue 5.  Scott Gibson writes a very interesting article on DC Comics’ Robert Kanigher, entitled maker and breaker of heroines.  Tom O’Reilly writes an article on television’s Sheena.  Bob Rodi begins Operation: Deluge!  Ted Delorme checks in with an interview with an Amazon and Mercy finally gets around to a Spotlight On: The Legion of Super Heroines (plus their friends and foes)!  Bob Rodi provided a review of The Charlton Bullseye, as well as, news covering the black and white magazines that were being published in 1975.  The Vault of Villainesses featured DC’s Catwoman in this issue.

This issue also provided a key to all the heroines drawn on issue 4’s cover by Strick.  I know I sure needed to look up quite a number of them, as I did not come close to identifying them all, and I had a full size version of the cover to look at.  If anyone is interested, I could run a full size copy in another issue and provide you the key, as well.

Issue #6 came with yet another wraparound cover, celebrating the fanzine’s “first birthday” by Tom O’Reilly & Tom Luth.  It features the Legion’s villainess; The Emerald Empress, facing off against Black Canary, Wonder Woman, Black Widow, Miss America, Black Orchard and Storm.  In this issue, Bob Rodi supplied a heroine profile on the Valkyrie, Mercy a Spotlight On: just about everyone, including the Teen Titanessess, the Avenger Gals, the Legion of Super Heroines, Ms. Miracle, X-Women, as well as, Aquamaidens.  Boy did she ever squeeze a lot of info on 2 pages!  Kirk Hastings submitted an article and art on the swashbuckling women of the Conan saga.  Ted Delorme gave us a centerfold of Miss America, Wonder Woman, Ms. America, Chefac (the fanzine’s mascot) & Miss Liberty.  Dwayne Best brought us the Escape from the Vault of Villainesses and featured the Scarlet Witch, Black Widow and Medusa.  Villainesses who all turned their backs on crime and became heroines!

Various spot illustrations were done by Alex Bialy, Ted Delorme, Richard Howell, Chris Padovano, Bob Rodi, Carol Strickland, Scott Taylor and Mercy Van Vlack.  All in all, another solid issue, that completed and celebrated their first year as a fanzine.  Some might consider it crude by today’s standards, but never the less, a true labor of love.  You can see this in every article and every drawing.  The writers and artists were enjoying themselves and having fun!  Something that seems missing, most of the time, in today’s fandom.

Issue #7 leads off with a cover by Bob Rodi.  Kirk Hastings contributed an article on the Star Trek Heroines.  Mercy begins a new feature to replace her Spotlight On series, now she’s doing the Heroine Hotline!  Dwayne Best’s Vault of Villainesses spotlights the Enchantress.  Rodi’s back with another Heroine Profile, #2 in a series, collect them all, this time it’s on Supergirl.  The centerfold is of Emma Peel & Tara King.  Val Beasley writes on revamping the Valkyrie.  Artists this issue include, Ted Delorme, Hastings, Larry Heller, Tom Luth, Michael Price, Rodi, Strick & Mercy. 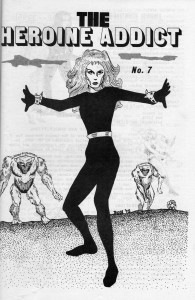 Issue #9 hits us with another wraparound cover by Mercy Van Vlack, featuring Tigra & Polaris.  She also provides another Heroine Hotline edition.  Best’s Villainesses, looks at Poison Ivy, and in an unprecedented move also supplies a second Vault on Marvel Comics’ Umar!  Scott Gibson gives an in depth review of the all heroine issue of DC Special #3.  Scott also provided an article looking at Fly Girl.  Hastings supplies the art for the Batgirl centerfold this issue.  Rich Morrissey is back with an article on television’s Isis.  Ted Delorme looks at the Metal Men heroines, in an article entitled; Spare Parts.  Of note, future editor, Steve Johnson, has his first contribution, a new column, Golden Age Girls!  Artists represented this issue include; Delorme, Hastings, Luth, Rodi, Wes Smith, Strick, Taylor & Van Vlack.

Issue #10 leaps out at us with one of the best covers in the run, Volcana Ash from Marvel’s Killraven series, as drawn by Wes Smith.  Mercy submits another Heroine Hotline, Rodi profiles DC’s Starfire.  The Vault of Villainesses is another escape from edition and looks at Marvel’s Moondragon, another villainess’ turned hero!  Gibson does an in depth look at DC’s Rose and Thorn, and Johnson is back with another Golden Age Girls column.  Artwork is by Delorme, Heller, O’Reilly, Rodi, Strick & Van Vlack. 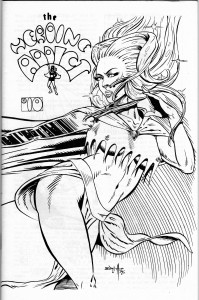 The final issue of The Heroine Addict is the 11th issue, and as I mentioned previously, with this issue, the editorial control moved from Al Tanner to Steve Johnson.  Steve attempted to upgrade the quality of the fanzine, as well.  It looked better, but it lost some of the fun that was previously found in this fanzine.  Doug Ready drew the cover.  Joanna Moore provided a full-page illustration of Supergirl and the centerfold was an unpublished cover to Marvel Comics’ The Cat #5, drawn by Gil Kane!  Gibson presented an article entitled; The Not So Dazzling Debut Of Dawnstar, which would only be of interest to Legion fandom.  Johnson has another Golden Age Girls contribution.  Gibson writes about Marvel’s Madame Masque.  Taylor looks at Mentalia, Rodi profiles Storm and Strick supplies an interview with the Invisible Girl.  She also looks at the Queen of Crime – Catwoman!  Future pro, Brent Anderson, makes his debut sharing his drawing skills.  Other artists are Delorme, Heller, Luth, Moore, Padovano, Rodi, Smith. Strick & Van Vlack.

With issue #12, it became Heroines Showcase, but that was really a completely different fanzine.  Heroine Addict was definitely a niche fanzine, but one put together by a group of fans that really enjoyed putting out the fanzine!  It was most impressive, at least in my eyes, and I’m telling you, almost forty years later that it is well worth your collecting dollars!