Hey out there, it’s time for another RETRO REVIEW, so what do you think of that?  Hopefully, you’re in favor of it, as today, I bring you Luke Cage, Hero For Hire # 1, cover dated June 1972, from Marvel Comics!  Though in the indicia, the title is listed as simply; Hero For Hire.  This book features the first appearance and origin of the character, Luke Cage.  The comic features a very striking front cover drawn by John Romita Sr.  Take a look at it: 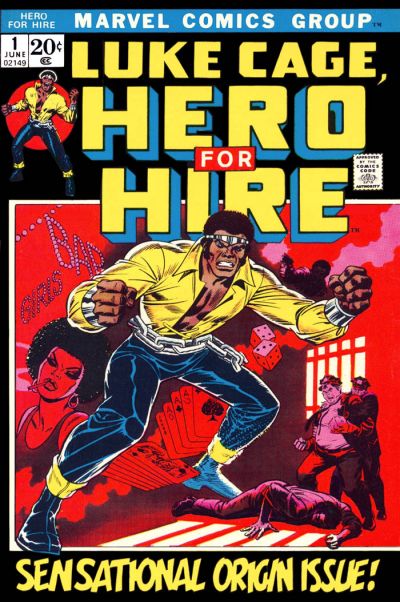 Now that’s a cover, if you ask me!  It pops right out at you, screaming Sensational Origin Issue!  And it features, clearly, a black super-hero!  There were not many around in 1972, let alone, starring in their own comic book!  So you’ve got to give Marvel credit for pushing the envelope back in the day!

But back to this first issue, the story begins in Seagate Prison, sometimes called “Little Alcatraz” by it’s inmates, if you believe Goodwin!  We see a prisoner named Lucas being released from solitary.  The story then follows him as he interacts with his fellow inmates, as well as, the prison guards.  We then see the head of the guards, Captain Rackham, try to recruit Lucas to play stool pigeon against his fellow prisoners prior to a new warden reporting.  Lucas refuses, and a guard, Quirt, is brought in to break Lucas.  He beats up Lucas, who doesn’t fight back.  It’s at this precise moment that the new warden arrives.  He fires Quirt on the spot and finds Captain Rackham in his office, smoking cigars and drinking.  He busts him down to a regular guard and gives him a week to shape up, or he’ll be gone too!

We then are introduced to Dr. Noah Burstein, who patches up Lucas.  AT this point Goodwin gives us a five page flashback to how Lucas ended up going to prison.  He was “tight” friends with Willis Stryker and they grew up together in a local gang.  But as they aged, Stryker got “harder and harder” and Lucas eventually got sick of the bloody rumbles and the continuous running.  Stryker joined “the rackets” and Lucas joined the establishment, where he met Reva, a co-worker.  Then Stryker saw Reva, and then they both were in competition for her!  Of course, Stryker had money and Lucas didn’t, and Reva seemed to be falling for Stryker, until she found out about how he made his money!

So she once again found time for Lucas, and eventually they were to be married.  Only to have Stryker plant drugs in Lucas’ apartment.He then tipped off the police and Lucas ended up going to prison.  While there, Reva again began seeing Stryker, until she was gunned down by a rival “dope-smuggling” outfit who was actually gunning for Stryker!

Once Lucas finds this out, he volunteers to be a “guinea pig” for some research being conducted by Doc Burstein, in the hopes to gain a parole.  And it is while he is in a chemical bath that is suppose to only last a few moments that Rackham makes the scene again and locks Lucas into the bath and sabotages the controls.  Eventually the contraption explodes and Lucas emerges with superhuman strength, stamina and what appears to be “bullet-proof” skin!  He then escapes from Seagate Prison and goes into hiding.

It’s at this point he becomes “Luke Cage” and decides to hire himself out to people in need.  Of course he swears on Reva’s grave to bring, his once best friend, Willis Stryker, to justice and clear his name!

A pretty strong first issue and one that convinced readers to come back for more!