Rather than another Retro Review this week, I thought I might start a new column that will alternate with my Retro Review column and I’ve decided to call it Fabulous Finds!  Though the column name isn’t set in stone, so if you’ve got a better name for this column, please let me know in the comments section below!

For this inaugural column, I’ve dug into my basement archives and pulled out the Mighty Marvel Calendar for 1975!  It was the first of a seven year run of Marvel calendars, 1975 through 1981, though it was actually published in 1974.  Here’s the fabulous cover: 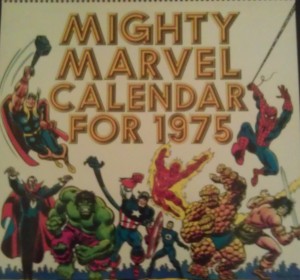 The calendar  cover features, as you can see from the scan above, a nice John Romita (Senior) cover featuring Spider-Man, Thor, Captain America, The Hulk, Conan, The Thing, The Torch, Mister Fantastic and Dracula!  The calendar sold for $ 3.95 in various stores of the day.  Each month features a different Marvel character or characters.  January features Spider-Man, with another nice John Romita (Senior) drawn artwork.  Here it is: 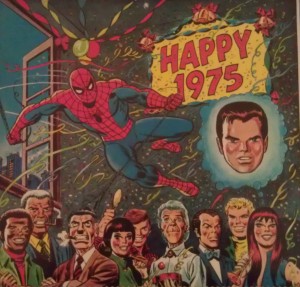 Each month of the calendar features information about the character, such as Spider-Man’s words of wisdom; “With great power there must also come great responsibility” for January.  Also on the appropriate day of the month a Marvel bullpenner’s birthday is listed.  Such as John Romita’s birthday being on January 24th.  Here’s what the open calendar looks like for January: 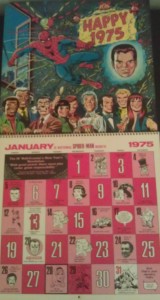 Some of the artist’s doing artwork besides John Romita Senior are Frank Brunner (February), John Buscema (April), Barry Smith (May), Jack Kirby (September) and Mike Ploog (October).  Here are a couple of those months for you to see: 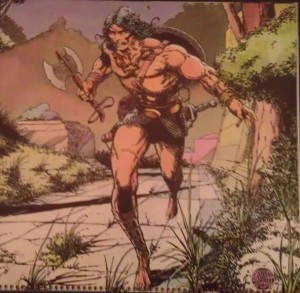 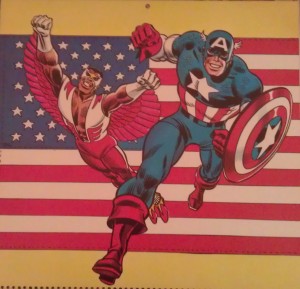 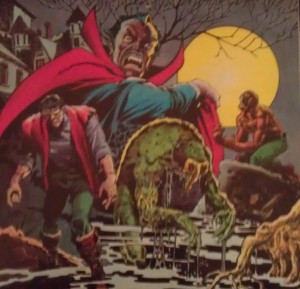 I think this first Marvel calendar rates high on the cool scale and was quick to pick it up back in late 1974 – early 1975!  You can still find one occasionally on eBay.  There it will set you back somewhere between $ 25.00, the cheapest I’ve seen it to as high as $ 60.00.  The good news is that Back to the Past has one up for auction in their planned September 15th auction.  I believe it’s in the Saturday evening auction.  So if you’re interested plan 0n being there, or you can also bid on-line via Proxy Bid.

One final cool factoid about the 1975 Marvel Calendar, it actually appeared in a Marvel comic book!  What’s that?  You’d want to know where it showed up?  Well, okay, since I’m in a good mood, I’ll tell you.  Pull out your copy of Fantastic Four # 165, cover dated December 1975, and take a close look at the panel showing Reed Richards pointing to a calendar.  Yep, he’s using the Mighty Marvel Calendar for 1975!  Here’s that panel, in case you don’t own that comic: 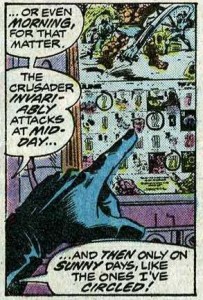 And even cooler is that he’s pointing to the Fantastic Four month of June.  This comic book was written by Roy Thomas and is drawn by George Perez!  I don’t know about you, but I find that pretty darn cool, or at least pretty darn geeky!  Your choice.  Anyway, that’s it for this first Fabulous Finds column.  Please leave a comment and let me know if you think this would be column you’d enjoy seeing on a regular basis!  Peace!  –  greg