This week RETRO REVIEW takes a look at a little known comic book, entitled; Redfox.  This comic is published by English publisher Harrier Comics and is cover dated January 1986.  The character of Redfox herself, first appeared in a fanzine, by the name of Dragonlords.  Fox, the comic’s artist and creator, used the strip to comment on barbarians  in fantasy games, such as Dungeons & Dragons, and later expanded his heroine’s story into a three-issue Redfox fanzine.

The fanzine stories were then revised and redrawn, to form the early issues of the bimonthly black & white comic.  Harrier Comics published the first ten issues.  Valkyrie Press was then established solely to publish Redfox.  After a further ten issues, publication ceased. But the character wasn’t finished, as an 8-page “origin of sorts”, was written by Martin Lock and drawn by Fox, which was published in Swiftsure # 9 (July 1986), another Harrier Comics title.

But enough history, what about this first issue?  Well, it was written and drawn by Fox, no other name given, with additional dialogue by Mike Lewis.  The first issue features two stories, the first featured Redfox and the “Treasure Of Pthud”.  The story begins with Redfox travelling across a vast desert, where she finds a pyramid that she has been searching for. 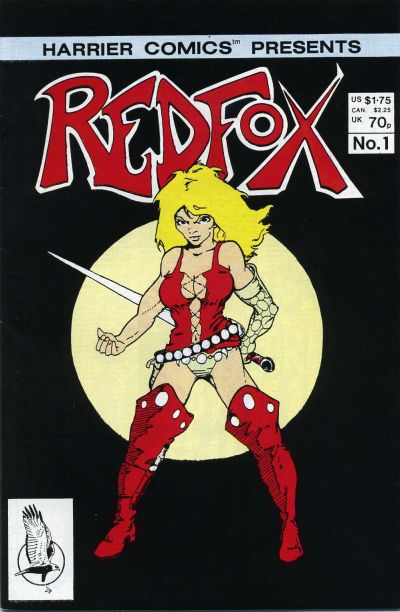 She enters and encounters the monstrous guardian, Trog!  She eludes him and traverses a number of traps, only to fall prey to Ankhl, Lord Supreme of the Dark Labyrinths of Pthud!  She is hung in chains and helpless, until Trog comes to her rescue, as he obviously has fallen for her, or as he says; :Trog likes little girl!”

She continues to search for the treasure, but only finds an old man.  He awakes and explains that there is no treasure!  The rumors were a ruse, to enable a clever thief to reach him with “the key”!  He reveals himself as, the sorcerer, Estaque of Galtaya.  Using his powers, he and Redfox, escape the pyramid through a inter-dimensional space warp and reappear at his castle.

The second story; “Tower Of The Sorcerer” picks up the next day.  The same creative team is responsible for this story, as well as, the first story.  This story shows Redfox taking lessons to become a sorceress, but really she has no aptitude for it and the story is to be continued in the second issue.

Fox’s art is not really of a professional quality, but you can tell he enjoys drawing his character, Redfox.  I stuck out the full ten issues, but I can’t really give this first issue, or the series, as a whole, high marks.  You can easily tell this is more amateur than professional work.  In fact I would have to rate it as only one (1) out of five (5) Swords!