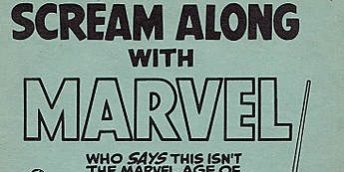 What time is it kids?  It’s time for another Fabulous Find!  And this week I’m featuring the Scream Along with Marvel record from 1967!  It’s a flexible, black disc that came in a picture sleeve and it was part of the original 1967 through 1969, Merry Marvel Marching Society, or M.M.M.S. membership kit.

The ads for the new M.M.M.S. first appeared on the letters pages of Marvel comics, cover dated August 1967, where the leading character of whatever comic book you were reading introduced a “nifty new Membership kit!” for only sixty-nine (69) cents.  And that was a really great deal considering that, only the month before, the old M.M.M.S. membership kit, which had been offered since 1964, was still priced at a dollar!  And of course, the new kit had new merchandise and was priced even lower than the old kit!

But today I only want to share the 33 1/3 rpm record that came with the kit.  Here’s the ad that ran, though this one is from later on when they had raised the price of the membership kit back to a dollar.  This ad features Daredevil:

The record, once you received it featured a nicely illustrated green cover, featuring; the Hulk conducting!  I would guess that the art was provided by the great Marie Severin, though I don’t know that for a fact!   Take a look, and let me know if you disagree, or know otherwise. Looking for a good place to sell your vintage records? 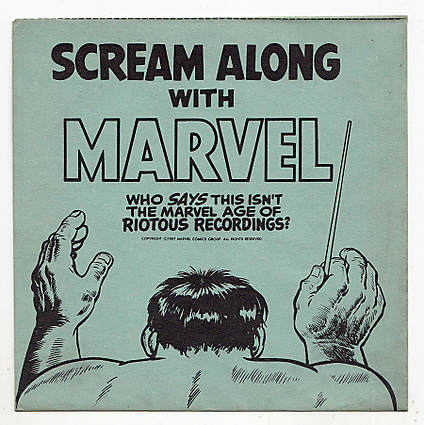 Scream Along with Marvel front

The back of the record sleeve shows; Thor, Sub-Mariner, Captain America, Hulk and Iron Man walking toward you singing the M.M.M.S. theme song, or at east that’s what it appears they’re doing!  The flap on the back is a subscription order blank, allowing one to subscribe to their favorite Marvel comics, such as; the Fantastic Four, the X-Men, Spider-Man, etc.  Of interest is that Marvel was also offering subscriptions to their western heroes like; Kid Colt, Two-Gun Kid and the Rawhide Kid and even to their humor title, Not Brand Echh! 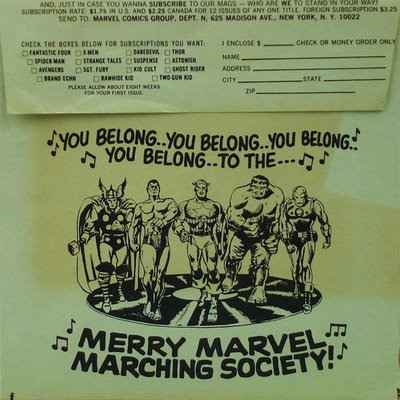 Scream Along with Marvel rear

I think that this drawing is also done by Marie Severin, but it may just be her inks over Jack Kirby pencils, I can’t tell, so again you be the judge.  And in case you also would like to see the actual “floppy” record, well here it is: 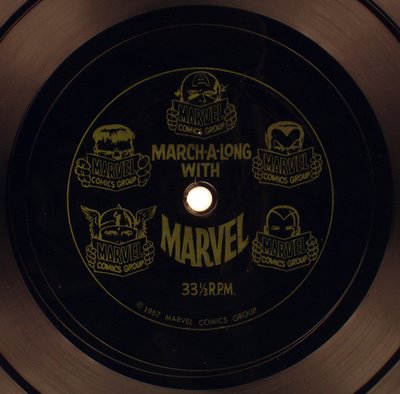 Scream Along with Marvel actual record

Pretty cool, with the graphics printed on the vinyl, or plastic, whatever it is.  And if you haven’t figured it out yet, the characters featured on the sleeve and on the first song of the record, are the Marvel heroes featured in the cartoons.  The second song is the actual Merry Marvel Marching Society theme song!

And please come back next week for a new RETRO REVIEW.  It will feature a Marvel Comic book!  See you then and before you go, please leave me a comment if you’ve enjoyed this post!  Be seeing you …