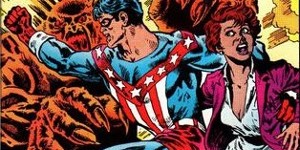 First let me open by wishing all my readers a Happy Fourth of July!  And in honor of this most patriotic day, I choose to do a RETRO REVIEW on a patriotic hero!  No, not the obvious, Captain America, who was created by Joe Simon and Jack Kirby, but another lesser known patriotic hero, also created by Simon and Kirby, Lancelot Strong, The Shield!  The comics are Lancelot Strong, The Shield # 1 & 2 published by Red Circle Comics Group.  These two issues were cover dated June and August of 1983 and are the only two comics in this series!

Sadly, there were only just two issues of Lancelot Strong, The Shield published.  Or maybe 1983 just wasn’t the right year to publish a patriotic hero comic book?  I can’t say it’s that great of a comic, but any comic deserves better than just two issues, at least in my opinion!  Bust back to the comic.  Here’s the cover to issue number one: 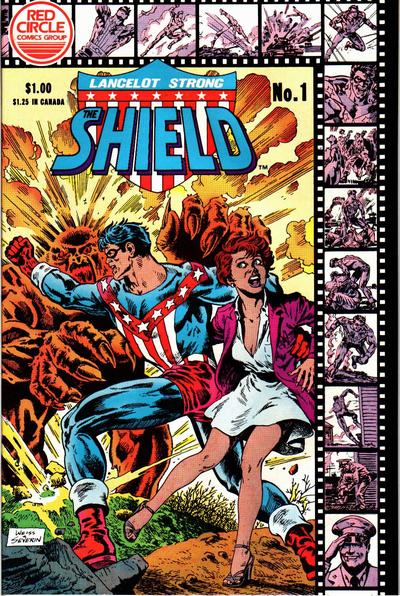 As you can see, the cover is pencilled by Alan Weiss and inked by John Severin, they even signed their work!  The story is entitled; “The Deathstar Dilemma!”  Hmmm, playing on Star Wars popularity, perchance?  The story is written by Stan Timmons and Rich Buckler.  The pencil art is provided by cover artist, Alan Weiss and the inks are by Sam de la Rosa.  The story ran nineteen (19) pages.

The splash page sums up The Shield as the “product of a unique experiment that began in his early childhood, Lance’s brilliant father, Professor Malcolm Strong, electronically developed the infant’s hidden powers.”  He is able to “hurl bio-electric bolts of energy, with his incredible reflexes, he can dodge the deadliest weapons at point blank range and adapt his body to any environment.”  Which means he’s able to survive underwater, in space or even in the heat of a volcano!

The story begins at Fort Sherman, where The Shield appears to take down a band of spies trying to steal an experimental weapon.  One spy escapes though, and Captain Lancelot Strong has to suffer through a tongue lashing from General Smith.  As the “lashing” is wearing down, Doctor Laureen Smith, the General’s youngest daughter, who is finishing an internship at the base’s hospital enters.

Of course, it’s “love at first sight” or at least infatuation, between the two of them!  She returns to the hospital where one of the spies is set to get x-rayed to determine is he has a concussion.  But the escaped spy has taken over the x-ray room and has used the experimental ray to infuse the man with the “awesome energies of a collapsing neutron star!”

The irradiated man, now monster, busts out and Lancelot Strong must fight him, as The Shield.  They battle, but the new menace grabs Lauren and leaps away, “hulk-like”.  The Shield must seal the leaking radioactive isotopes before following them.  In the meantime, Dr. Smith tries to reason with the man/monster and almost has him convinced to go back, so that she can help him, when The Shield arrives and the two do battle again!

The man/monster eventually, like a true black star, collapses inward to his own core, causing a nuclear blast.  The Shield grabs Dr. Smith and out runs the blast.  Hey it’s a comic, he can do that apparently!

There is a ten (10) page back-up story also, which features Steel Sterling that is written by Timmons and Buckler and pencilled by Adrian Gonzales and inked by Rudy Nebres.

Lancelot Strong, The Shield # 2 features a cover pencilled by Rich Buckler and inked by Ricardo Villagran.  Here it is: 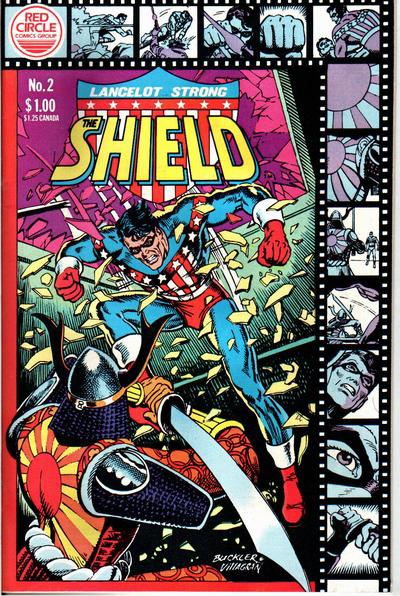 This issue actually leads off with the Steel Sterling feature written by Bob Kanigher and both pencilled and inked by Rudy Nebres. And The Shield is already reduced to the back-up story in his own comic!  In fact, the beginning of his story features the original Shield from World War Two in 1945 for the first six (6) pages of the eighteen (18) page story.

Finally on page seven (7) Lancelot Strong appears in 1983, out on a date with Doctor Lauren Smith, who he and the readers met in the first issue.  Captain Strong even stops a robbery before returning with Dr. Smith to the base.  There he begins a workout in his Shield costume/identity.  During the workout, he loses control of his powers and is forced to flee the base, to release his building energy, so he does not endanger the soldiers and civilians on the base!

General Smith finds him and they have a heart to heart talk and explains that the base is on full alert as they been attacked by the Japanese!  Well, actually, not the Japanese, just a Japanese, known as the Red Sun!  The Red Sun next appears in San Francisco, on a mission to kill the President of the United States, who happens to be there in the city.

The Shield is called on the defend the city, even though his powers are not functioning properly.  As The Shield appears, the Red Sun brings down an entire building right before his eyes!  And that’s where the issue ends, on that cliff hanger!  And since there was not a third issue of Lancelot Strong, The Shield, was the storyline ever resolved?  Yes indeed, in the lone Shield – Steel Sterling # 3 comic.  Then the comic was retitled again to just Steel Sterling for issues # 4 through # 7, where it too ended.  But that’s a story for another day and column.

Remember that The Shield was the hero created by Joe Simon and Jack Kirby in 1959, and he had no connection to the previous version.  The hero appeared in the comic; The Double Life of Private Strong!  Strong acted similar to Gomer Pyle, the television character, a sort of country bumpkin as Private Strong, much different that the hero, The Shield.  But DC Comics went after Archie Comics saying Lancelot Strong and The Shield was too much like their characters; Clark Kent and Superman, so they immediately stopped publishing the comic.

But Red Circle brought him back, twenty-three years later, but only for a very short life, in more ways than one!  I hope you enjoyed my look at this patriotic hero on the Fourth of July and I hope you stop by again nnext week for a new Fabulous Find!  Be seeing you …