Firebrand: Known For The Legacy 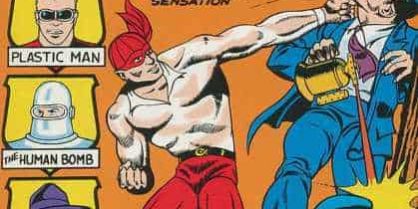 Welcome back to My Hero! Each week, Back to the Past uses this column to tell you why the obscure characters from our custom action figure collection are great! Years ago, we purchased the life’s work of an artist and comic fan whose chosen medium was granting forgotten comic characters the action figure immortality denied to them by major toymakers. We’re still sorting through it all, and we’re making new finds every week! This week’s find, who will soon be available on ebay, is Quality Comics turned DC hero Firebrand! 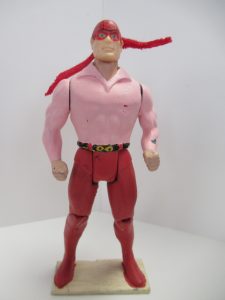 Firebrand as he appears in our Custom Action Figure collection.

Who is DC Comics’ Firebrand?

Firebrand is Rod Reilly, layabout playboy son of steel tycoon Ed Reilly. Utterly bored by his life of privilege, Rod adopted his costumed identity purely for kicks. His only confidant was his friend “Slugger” Dunn, an ex-boxer who trained Rod to battle crime with his fists. His calling card was a “flaming torch of justice”, but otherwise the name was just a cool nom-de-guerre.

Pop quiz! What was the cover feature for Plastic Man’s debut in Police Comics #1? The answer, is of course, Firebrand. In fact, graced the cover through issue number four, at which point Plastic Man took that spot and held it until issue #102. Firebrand, Police Comics’ original star, would appear in just thirteen issues of the series before fading into obscurity.

In 1977, some thirty-five years after his last Golden Age appearance, Firebrand returned in the pages of DC Comics’ Freedom Fighters #10. He joined the team of his fellow Quality Comics creations until their series was cancelled with #15, a victim of the infamous DC Implosion. That was Rod’s last major outing, but not Firebrand’s. 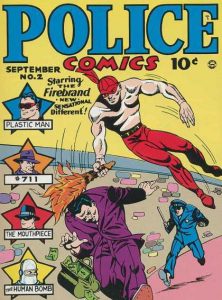 Firebrand as he appeared on the cover of Police Comics #2

1981 saw DC Comics introduce The All-Star Squadron, a team compromised of literally all their Golden Age characters. Editorial notes would routinely cite 40+ year old comics as background, but one character in the series was pure 80s. See, series writer and Golden Age fanboy Roy Thomas was refused the use of Quality Comics heroine Wildfire due to DC already having a popular member of the Legion of Super-Heroes by that name. His solution was to create Rod Reilly’s sister Danette (named for Roy’s wife) and have her become the new, flame-powered Firebrand. Rod would occasionally pop up in costume, but the name really belonged to Danette by that point.

A Legacy Devoid of Plastic

Up to that point, the original Firebrand had 19 total appearances. His sister would appear in fifty-nine issues of All-Star Squadron, be one of the lead heroes in the first quarter of the Crisis on Infinite Earths, and just generally be THE Firebrand in the DC Universe. Some sort of actual flame-related ability has been the standard since then, with three more DC heroes taking up the name in the 90s, 00s, and New 10s. In terms of pure number of major appearances, the original places third out of five.

But, weirdly, none of the Firebrands have official action figures! Not even the one who spun out of Infinite Crisis at a time when DC Direct was definitely producing action figures. If you’re a completionist who wants the ENTIRE lineup of the All-Star Squadron on your shelf, our Custom Action Figure Collection is where you need to look. And if you’ve got collection like ours– be it custom figures, original art, garage kits, convention sketches, whatever – and are looking to sell it, get in touch!