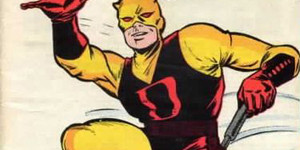 I Will Tell You #97:
Happy 50th Anniversary, Daredevil; Glad You Made It!
Part Two of Two

Last week, as you’ll remember, I talked about Daredevil’s fiftieth anniversary, and the amazing enough fact that the character has simply made it that far. The comic was a moderate success, at best, for its first fifteen years, before Frank Miller came along and saved it from possible cancellation. Before Miller, though, the character had to survive a challenge that anyone turning fifty had to endure. What was that challenge, you ask? Why, I will tell you, for I survived it myself; that challenge was none other than the decade of the 1970’s. 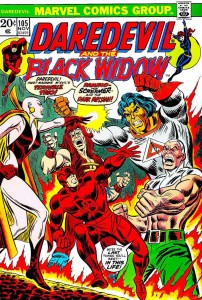 The 1970s were a wacky time for just about anybody who was around back then, and Daredevil survived them just as everyone else did. But just barely; there simply wasn’t anything all that memorable to come out of the comic in those days. There was a cyborg villain called Ramrod who was introduced in the title, but if there was anything noteworthy about this character, it wasn’t for a good reason. Angar the Screamer hasn’t made any appearances for awhile, except as the butt of jokes. And Tagak the Leopard Lord only lives on in the advanced levels of comic book trivia tournaments.

One notable character introduction was the one-time Avenger and cosmic telekinetic / telepath Moondragon, who has battled cosmic heavyweights like the universal nihilist Thanos. The fact that this comic served as the introductory venue for such an otherworldly character seems really weird, in retrospect. After all, Daredevil, throughout all the wackiness, has always remained an earthly, city-bound hero, whether it’s in New York or San Francisco. But hey, even Batman hangs around with a Kryptonian on a regular basis, had traipsed through the jungle clad in a loincloth that one time, and even been transported to alien planets on occasion. So even the best recognized urban heroes can creep away from their city roots once in a while.

The Craziness Started Before The Smiley Era 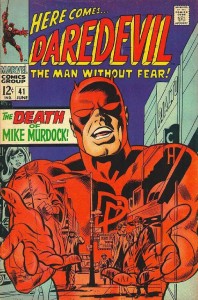 But to talk about the old-time craziness surrounding Matt Murdock, one really need look no further than a few years after Daredevil’s debut, to the introduction of the ill-fated Mike Murdock, Matt’s fake and flamboyant twin brother, who professed to be Daredevil and was conjured up by Matt himself to quell public suspicion regarding DD’s true identity. Even Stan Lee, who came up with the idea, eventually realized that it was kind of crazy, so poor old Mike ended up having a very short lifespan. And for even earlier wackiness, go further back to the very cover of the Daredevil #1, which sported an image of a costume that has long been regarded as one of the ugliest in superhero history. Anyone spying that cover surely suspected Daredevil must have been blind to design and wear such a horrid outfit, even before reading the issue to discover that he actually was.

Of course, that was once the first issue finally hit the stands. As legend has it, the issue was going to be late because artist Bill Everett was running behind schedule, so with a hole looming in Marvel’s publishing plan, Stan Lee got ahold of Jack Kirby and tried to figure out a way to quickly fill it, but the pair had no time to come up with any new characters for such a hastily planned title.

This conundrum resulted in a new comic, featuring already existing characters, called The Avengers. And the rest, as is said, is history.

But Daredevil Later Beat The Avengers At Something 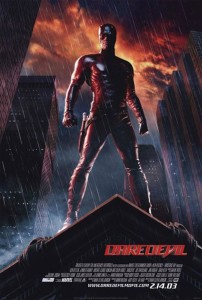 History was also made forty years later, when Daredevil managed to predate The Avengers this time, namely in movie theaters. Daredevil was one of Marvel’s early big screen efforts, and while general reaction to it was mixed, it nonetheless assembled a strong cast and cleverly addressed some issues regarding DD’s powers that oddly had never come up in the comic. With the success of Marvel’s current crop of Avengers-related films, it seems hard to believe now that Daredevil actually beat the first of these, Iron Man, to movie houses by a full five years.

There’s a twist of irony is saying that a blind superhero had to overcome longer odds. The longevity and success of Daredevil needs to be recognized; not because of the character’s blindness, nor in spite of it; but because the title has spent much of its existence displayed on the bottom of the spinner racks or at the far end of the new comic section. It has often subjected readers to some pretty strange and remarkably bad stories, and was on the brink of ceasing publication. All of this has led to a comic that is stronger because of this history, not to mention a film that was given a chance long before that of other more popular comic franchises.

So Happy Birthday, Matt. Take it from a fellow demi-centenarian; life’s challenges and near misses make reaching such a milestone something to celebrate indeed. Here’s looking forward to another fifty, because any man with a tortuous past who can embrace the future, and the uncertainty that it brings, truly is a man without fear.