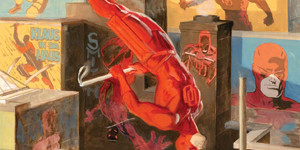 I Will Tell You #96:
Happy 50th Anniversary, Daredevil; Glad You Made It!
Part One of Two 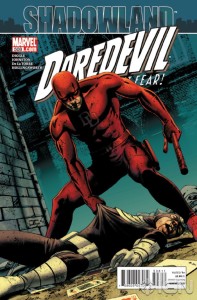 When it comes to urban superheroes who have demonstrated staying power over the course of several decades, Daredevil has historically been the literal red-headed stepchild in this four-color family of costumed crime fighters. Among his comic book kin, DC Comics’ Batman has long been the domineering oldest sibling, coming along a full generation earlier, and whose dark and brooding ways have both separated him from his brighter and happier skybound cousins and also cemented his place in comic literature and mass media. Marvel Comics’ own Spider-Man is the middle child more akin in nature to his little brother, but one whose popularity has put his likeness on far more movie one-sheets, action figures, and tee shirts than poor little Matt Murdock could ever hope for.

And yet, despite the relative lack of merchandising and message board buzz, here comes Daredevil, the man without movie sequels, who turns fifty this year, and is looking pretty strong and resilient for a character who has spent much of his career in the shadows, in just about every way possible. Despite the hook about being the world’s first blind superhero, he’s swung about in the shadows of his flashier superhero colleagues, and he’s wallowed in the shadows of towering sales figures that have regularly topped his own. He’s even ruled from the shadows during the course of his own event story (Shadowland, appropriately enough), but this event garnered relatively little notice in competition with other such stories of larger scope that hopped dimensions, traveled through time, and altered reality. Daredevil is known for accomplishing amazing acrobatic feats, but his most astounding move of all might be simply avoiding obscurity. 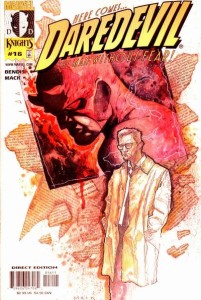 Over the past fifteen years, the character has been in the hands of some of the industry’s most capable and talented creators. With so many higher profile titles and terrific stories told during that time, it’s easy to forget that writers like Mark Waid, Ed Brubaker, and Brian Michael Bendis have done some of their best work while writing Daredevil. The artists they’ve collaborated with, such as Paolo Rivera, Michael Lark, and Alex Maleev, have each defined a look for the title and the character that’s just as canonical as those that have come before. Because of these incredible runs, it’s also easy to forget that before Frank Miller came along twenty years earlier and became the first creator to truly and successfully rejuvenate the character, this was a title was reportedly on the verge of cancellation. That alone is a worthwhile reason to celebrate Daredevil’s fiftieth year, for back in 1979, he was lucky to make it to his fifteenth.

At that point, the book hadn’t really been of much interest to readers since writer Roy Thomas stepped aside about a decade earlier, with other writers subsequently coming and going, making for a wildly inconsistent comic. There wasn’t anything of significance happening in the book when Miller came on board to draw it, so he also eventually took over the writing duties. When he did, he was given permission to cut loose, adding elements like ninjas and other characters into DD’s mythos who did just that. Miller brought along his own bag of tricks and largely ignored those used previously, save for the basic essence of what Stan Lee created early on and perhaps a character or two created since, like the villain Bullseye; another now-popular character that was pulled from the depths of obscurity. 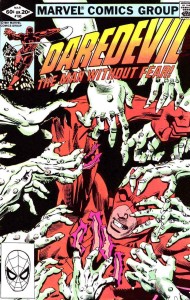 Miller made Daredevil a notable title not for just turning it into a far better comic book, but also for being one of the first comics to undergo such extensive change at the expense of what came before. Matt’s father, washed up fighter “Battlin'” Jack Murdock, was reinvented as an abusive and loathsome drunk, and may very well be the one of the first significant characters to go through a continuity reboot. Daredevil himself went from being a wise-cracking swashbuckler to a dark, driven, and disciplined martial arts master. Drastic changes were needed, and that’s exactly what Miller delivered, even if it meant discarding what didn’t work, or simply wasn’t needed. It was the kind of creative bravado that was all but unheard of at the time, but it wasn’t like there were many diehard readers who really liked the pre-Miller title enough to really make an issue of it.

1979 was the tail end of a decade that, in retrospect, is now acknowledged as a pretty strange one in a lot of ways. Those of us who were around back then were all victimized by it in some way, as witnessed by our clothes and hair in our high school yearbook photos. Daredevil was no different, and while his costume and red mane remained unscathed by the fashions of the day, there were a lot of occurrences to happen and characters to appear in the comic that could have happened at no other time than the seventies. I will tell you a little about that . . . next week.