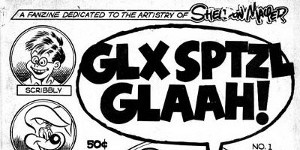 Wow, the summer is almost over already!  Where does the time go?  But hopefully you’re measuring the summer’s passing with my rotating columns; Fabulous Finds and RETRO REVIEWs!  This week it’s time for a new Fabulous Find.  So digging around in my collection I have unearthed a pretty rare and hard to find fanzine; Glx Sptzl Glaah! # 1, and as far as I know, the only one.

It’s a fanzine dedicated to the artistry of Sheldon Mayer and was cover dated Autumn, 1977.  Here’s a look at the front cover: 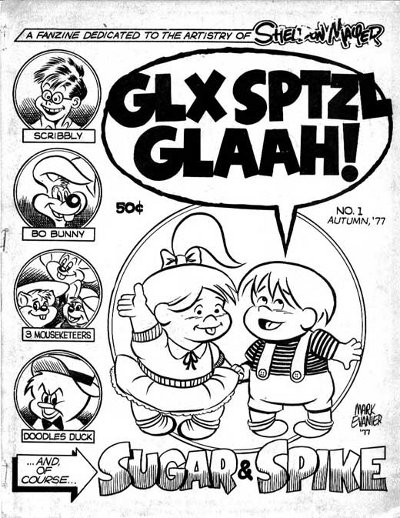 As you can see the cover was drawn by Mark Evanier.  The fanzine was put out by fans who were originally brought together because of their love for the Legion of Super-Heroes.  In fact their club put out the fanzine entitled; The Legion Output, earlier in the seventies.  Now a smaller group of the same fans, who were also fans of writer/artist Shelly Mayer and his characters; Sugar & Spike from DC Comics, in particular, got together and published this fanzine.

The listed editors are Zay Zilber and Ken Gale, both long time Legion fans and I’m happy to say I’m personal friends with Ken Gale, as well as his wonderful wife, Mercy Van Vlack!  Though Mercy’s artwork is no where to be found in this zine, so she must have been busy elsewhere when the “boys” put this together.

Lots of artwork was provided in the zine by other Legion fan folks, like; Valeria Beasley, Alan Hutchinson, Bob Rodi, Rick Taylor and by editor, Zilber too.  All name fan artists in the Legion community.  The inside cover has a nice unsigned Sugar & Spike illustration saying that the fanzine is for Shelly Mayer (age 21 +), similar to how Mr. Mayer dedicated Sugar & Spike stories to children who wrote in, by listing their names and ages.

Then follows a Table of Contents with a nice Bernie the Brain illustration by Bob Rodi.  Legion fan, Harry Broertjes, starts the fanzine off properly with a forward giving some of the background on the fanzine’s raison d’etre and how similar it’s publication is to the Legion fandom’s formation and publication of the Legion Outpost fanzine!

Mark Evanier then writes a couple pages entitled; “… a few words…Glx Sptzl Glaah!…about Sheldon Mayer… Mostly he talks of his own early comic book collecting interests and how he discovered Sugar & Spike.  Next up is an editorial credited to both Zilber and Gale discussing the rumors (sadly, proved false) of a possible revival of the Sugar &  Spike comic.  It’s entitled: “To ‘Glaah’ No More?”

One cool thing included is a copy of an actual note from Sheldon Mayer to young fan, Mike Valerio.  Take a look at what letter writers to Sugar & Spike would receive from Mr. Mayer: 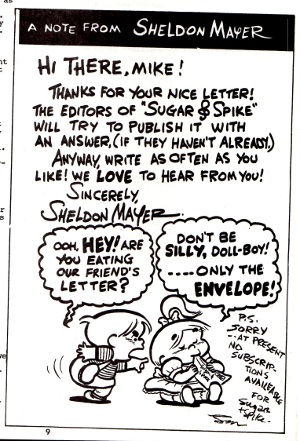 Next up, is an article written by well-known novelist, Ron Goulart, on a Golden-Age character that Sheldon Mayer wrote and drew; Scribbly!  Having Mr. Goulart submit to the zine certainly lends chops to this fanzine!  It appears that he is friends with editor Gale and they often compared Golden-Age finds with each other, going so far as having a friendly competition!

Next up, is a long article by fan, Rich Morrissey.  Rich was a bit of a “super-fan” having started the first Legion apa (amateur press alliance, LEAPA, which soon was renamed Interlac)  Interlac is still going strong all these years later, though the waiting list is not nearly as long today than it was during the seventies!  The article focuses on the more recent Sheldon Mayer creation, The Black Orchard!

Next, we have an article entitled; “Genius At Work” looking at actual Sheldon Mayer original art versus the published work in an issue of Sugar & Spike and how many changes that Mayer made to not only the artwork, but the dialogue order to even the “punch line’ of the gag!  It seems he was never completely satisfied, or if a better idea came to him, he wasn’t afraid to spend the necessary time to improve his work prior to it going to the printer!  A true mark of s professional!

Following that is an “interview” of Patsy Mouse, conducted by Gary Brown, in which he interviews said Golden-Age character in 1977, while discussing his long career.  Patsy Mouse was one of the 3 Mouseketeers, for anyone that didn’t already know!

Then, like in the Sugar & Spike Comics, the fanzine provides two pages of “Pint-Size Pin-Ups”.  And what are these, you might ask?  Well basically, there are paper dolls and cut out clothing!  In this case we get three dolls, Sugar, Spike and Bernie the Brain and five outfits, all based on, what else?, the Legion of Super-Heroes!  Rick Taylor provided the art for this feature!  Here they are: 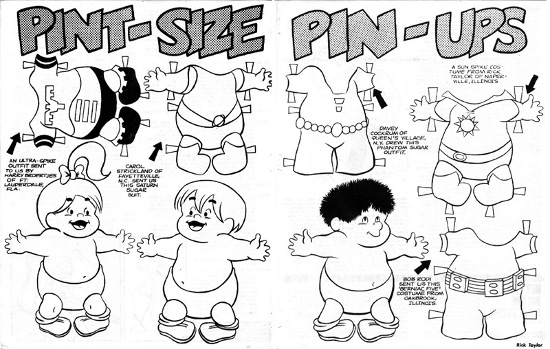 There is a half page of classified ads, mostly people wanting or selling certain issues of Sugar & Spike, a nice cartoon drawn by Rick Taylor featuring Golden-Age, Doodles the Duck talking to Marvel Comics’ Howard the Duck and the fanzine wraps up by reprinting an article which ran in the Sunday New York Times a few years earlier on the fact that twins, often formed a language of their own to communicate with each other, similiar to Sugar & Spike’s “baby-talk” language!

The artwork on the back cover is worth sharing, as well, featuring Spike as Spike the Barbarian, drawn by Alan Hutchinson.  So let’s end with that right here: 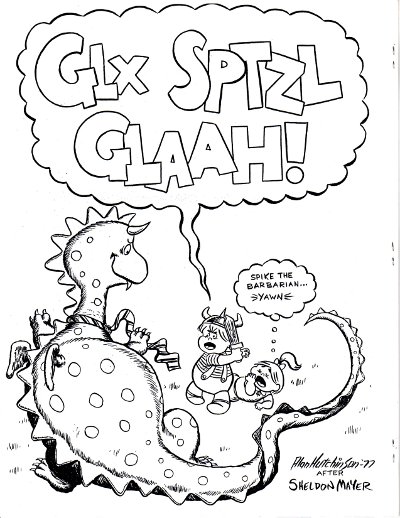 And there you have it, the first and only issue of the Glx Sptzl Glaah! fanzine from 1977!  Please come back next week for another new RETRO REVIEW and again in two weeks for a new Fabulous Find!  Until then … Glx Sptzl Glaah! to all of you …