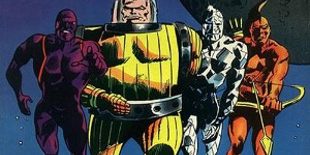 Welcome back everyone!  It’s time for another RETRO REVIEW!  Normally this week I’d be looking at a D C Comic book, but since today is the official opening of Marvel Comics’ Guardians Of The Galaxy movie, I thought you’d forgive me if I stick with Marvel for this week and return to the rotation and a DC comic in two weeks.  With that said, as you can see from the title above, I’ve selected Marvel Super-Heroes # 18 (Presents Guardians Of The Galaxy).  This comic book is cover dated January 1969.

Here is the cover of that comic: 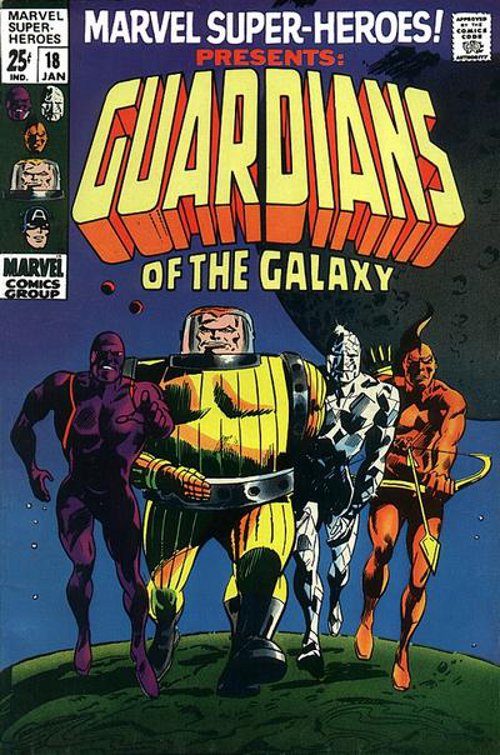 Of course everyone recognizes the name, Gene Colan, but who the heck is this Mickey Demeo guy?  Glad you asked!  He’s actually using a false name because at the time he was also working for that other company, with the D C initials!  It’s actually the well known inker by the name of Mike Esposito!  So consider yourself schooled!

So who are these strange beings from another time?  Well, from left to right, on the cover above, they are; Vance Astro, Charlie-27, Martinex and Yondu.   So does that help any?  No?  Well, hopefully I’ll explain each of them them as I go through this review.  Let me know if I let you down by the end!

The story also is entitled simply: “Guardians Of The Galaxy!” and it is written by Arnold Drake, pencilled by Gene Colan and inked, as listed by, Mickey Demo, (aka Mike Esposito).  The story begins in the year 3007 with Charlie-27, a fifth generation Earthling born on the planet Jupiter, where his body has adapted at birth to withstand Jupiter’s conditions (eleven times the Earth’s mass and three times Earth’s gravity).  He is returning home to Jupiter, from a six month solitary space militia duty assignment.

Strangely he finds no one there to greet his return!  But he is attacked by other space faring beings, known as the Badoon!  Before they battle, the reader is told that Charlie-27 is the last free Jovian!  Charlie manages to defeat the Badoon and rushes to his home, where he sees other Badoon taking his father away.  He follows and discovers that he is being taken to the Harkovite mines.

Charlie-27 witnesses that his people are being forced to mine the deadly Harkovite without any of the necessary protection and knows he has only five days to save his father, or he will die!   Again he is attacked by other Badoon and again manages to get away, but only by teleporting blindly off the planet!

Charlie finds himself on the planet Pluto!  He dons an atmospheric suit for his own protection and goes in search of help.  Only he finds that Pluto has also already been enslaved by the Badoon!  Escaping from more Badoon, he encounters another fugitive, a native Pluvian, who is a “crystal man”!  Pluvians have also descended from the people of Earth in their outward space exploration!  Needless to say, this is the second Guardian, Martinex!  Together they are able to fight their way to another teleport station and teleport to safety!

The scene switches at this point to the Planet Earth, where the reader meets the final two Guardians!  Major Vance Astro and Yondu are being brought before the Badoon’s Supreme Commander, as prisoners!  The Badoon use a memory probe on Vance and the reader gets a flashback version of how things got to be the way they are on Earth, with the Badoon in charge and that Vance has woken from a one thousand year cryogenic sleep!

Vance outwits the Badoon and frees Yondu and himself.  They race to the nearest teleport station, only to find Charlie-27 and Martinex already there battling the Badoon!  Together the four of them defeat the Badoon at the station and teleport safely away, pledging that “Earth shall overcome – someday” and they vow to find the “free colony” that is suppose to still exist somewhere on Earth and to do it together!

The rest of the giant-sized comic was composed of reprints featuring Golden-Age heroes; Sub-Mariner, Miss America, The Human Torch, and Captain America as the All-Winners Squad from All-Winners # 21 from 1941.

The Guardians of the Galaxy story ran twenty-two pages and was the very first appearance of the original Guardians of the Galaxy.  The next time they appeared was in Marvel Two-In-One, issues 4 & 5 during the summer of 1974, then in Giant-Size Defenders #5 and Defenders 26 – 29 in the summer of 1975.  Then during 1976 through 1980 they appeared as guest stars in various Marvel comic books.

It wasn’t until June 1990, that they received their own comic book, which eventually ran sixty-two issues.  Here’s a look at that first cover: 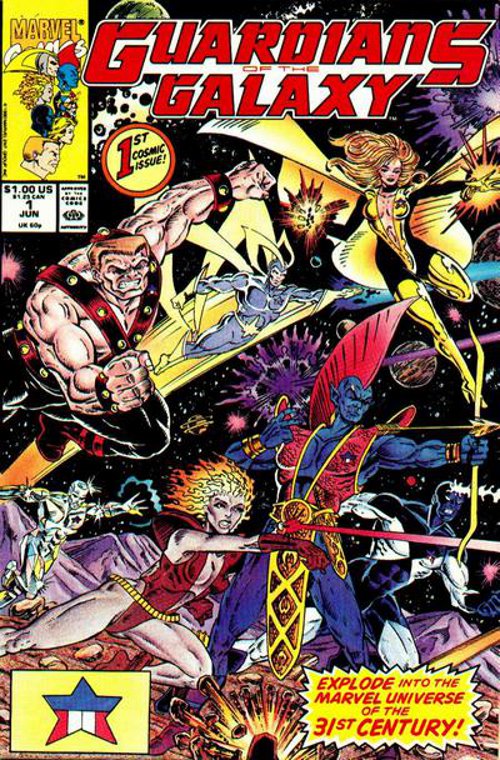 As you can see between there origin story and their first issue they managed to add a few additional Guardians, but just who they are will have to wait for a future post, as that’s all the time and room I have for today!

I’m really looking forward to the movie and personally, I prefer the current group to the originals, how about you?  Please come back next week for a new Fabulous Find and again in two weeks for a new RETRO REVIEW.